There’s a tiny plaque at the front door of the Steveston, British Columbia cafe that provides the exterior for Once Upon a Time‘s Granny’s. It reads:

Everyone Who Passes Through This Door Brings
Happiness. Some by Entering. Some by Leaving.

Folksy sass aside, the sentiment is fitting as the ABC series’ cast mills around the diner’s front patio during the filming of the series finale, which is titled “Leaving Storybrooke” and will air across two Fridays (on May 11 and 18).

Of course, we’ve left Storybrooke before, as Once pivoted from a story about fairy tale characters calling that Maine hamlet home to Season 7’s “requel” arc in which a new curse plopped familiar faces into the Seattle neighborhood of Hyperion Heights, again stripped of their memories. But this time is distinct, as the cast, both current and returning, films what will be their final scenes ever. 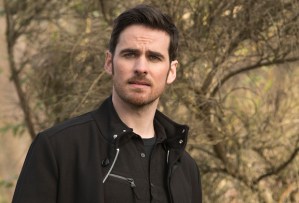 A GRAND FINALE | The Season 6 finale — which borrowed heavily from Once creators Adam Horowitz and Eddy Kitsis’ original plan for a series ender — “was this sort of ‘full stop’ on six seasons, whereas this is different, knowing that we’re ending,” Colin O’Donoghue, who plays Hook, shared with TVLine during our visit to the set. “It’s been such a big part of my life for six years nearly, so it’s kind of wild.”

Josh Dallas, a former original cast member and but one of many familiar faces returning for the finale, echoes O’Donoghue, saying, “It’s different because this is really the end. It’s over, it’s done, the story now has been wrapped up. But what Eddy and Adam have done, they’ve done it in such a beautiful way that it comes full circle. It’s going to be something that the fans are really, really happy with.”

“We have a great finale ahead,” says Lana Parrilla, warmly. “It’s beautiful.” 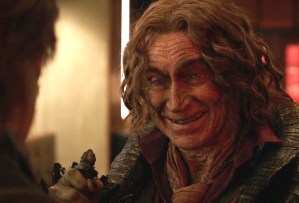 Setting the stage for final two hours is the exchange of one threat — Gothel, Alice’s witch of a mum who tried-but-failed to turn the world back over to nature — for another, as Wish Rumple resurfaced to taunt his other self for becoming a bit of a softie. The Wish Realm imp this Friday will take audacious steps in the name of his own plan to “use Henry to destroy everything” (as O’Donoghue puts it).

“When we saw him last season, he had the bones of Wish Belle. He was a bit crazy,” co-showrunner Horowitz reminds of Wish Rumple’s first appearance. “He’s a wild card!” O’Donoghue, who has played multiple pirates to Robert Carlyle’s “crocodile,” in turn describes Wish Rumple as “everything that old Rumple used to be, and more. He’s Rumplestiltskin without the filter of Belle, who tried to make him a man again, to bring kindness into his heart. He is just pure evil.”

To fend off this final foe, our Rumple will team up with his Hyperion Heights PD partner, Wish Hook, while Regina embarks on her own plan of attack — though splintering their efforts may come back to bite everyone in their curds-and-whey. So if it sounds like we need another hero (or several!) to save Henry and his loved ones, you’d be right. “[The end of the Gothel story] segues right into a big climax of many things which necessitates the return of a lot of familiar faces,” says Horowitz. “We have many threads from many years all coming together.”

MANY HAPPY RETURNS | Bringing back Dallas and Ginnifer Goodwin, along with original series lead Jennifer Morrison, Emilie de Ravin, Sean Maguire and other familiar faces, was admittedly a bit of a pipe dream that magically materialized into reality once all was said and done. “Some are doing pilots, some are directing…. There was a lot of scheduling gymnastics involved,” Horowitz affirms. “But everybody wanted to come back and everybody worked hard to make it happen. Shooting with them has been emotional” — for cast and creators alike.

Shares Morrison, who exited after Season 6 but put in one appearance early this season, “It was so nice to have that closure, to be able to go and have that final moment to say goodbye to Emma, to say goodbye to the cast, to say goodbye to a huge chapter in my life — and to know that it’s really, actually the end.” Adds Dallas, who met future wife Goodwin during the pilot, “We felt so grateful. [Once Upon a Time] was such a special time in our life for many, many reasons, so it was nice to say goodbye one last time.”

Surveying the assorted encores, Horowitz says, “Emma was the heart and soul of the show, and to have her back was just fantastic. And Snow and Charming, the opening of the [pilot] was the two of them, so it was only fitting that they have a critical role to play in the finale.” All told, “It’s been great to have the whole band back together.” 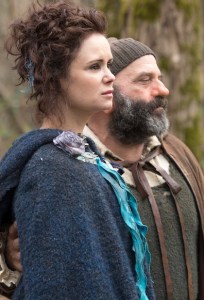 Among said encores, Grumpy will be spied doing what he does best — serving as Storybrooke’s town crier, a human clarion at the ready to holler about the latest danger. “I get to yell a little bit in the finale,” portrayer Lee Arenberg teases with a big ol’ smile. Having been MIA for all of Season 7, “To get to say goodbye to the character has been a flood of emotion,” the series vet adds.

As one of only three series regulars to return full-time for Season 7, Parrilla appreciated having all hands on deck for the series’ denouement. “Honestly, it wouldn’t have been the same without any of them, so I’m grateful that they all returned,” she says. “The audience is going to love to see their faces again, and they’re going to love to see how we close out the series.”

THE MAINE ATTRACTION | As you may have gleaned, Once Upon a Time is in fact circling the story back to Storybrooke with its XL finale. And that, like the cast encores, was a bit of a must. Says Horowitz, “Seven years ago, we were just starting the pilot here” in Steveston, the small town in British Columbia that doubles as Storybrooke. “It wouldn’t be right to not come back.”

Even Once‘s relative newcomers couldn’t help but get swept away by the homecoming’s significance. “It’s iconic — this place is its own little suburbia,” Rose Reynolds, who plays Alice, observed while filming her first-ever scenes in Steveston. Added Tiera Skovybe, who debuted at midseason as Zelena’s daughter Robin: “Like, I’m sad that its ending, and I’ve only been here for 11 episodes! I can’t imagine everybody else, who’ve been here for seven seasons. I would be a basket case!” Andrew J. West meanwhile was excited to gallop down Main Street on horseback, as Henry races toward an extremely special destination. “I’ve got my fairy tale garb out today, and I’m on a horse, so yeah, it’s going to be a good day,” he smiled as a drone camera readied to film overhead shots of the sequence.

PLAYING THE ‘GREATEST HITS’ | Nostalgic callbacks and comebacks aside, “Leaving Storybrooke” promises endings both happy and hard-to-come-by for each of the heroes. “Finding his way back to Belle has been the driving force for Rumple all season, and as we approach the final two hours of the series, he will face the most difficult decisions of his quite long existence,” Horowitz warns.

Adult Henry, meanwhile, ensnared as he is in Wish Rumple’s web, might depend on his grandparents for a critical save. “We’ve got some nice moments, and we’re flattered by that,” Dallas reports of the important role Charming and Snow will play. “It pays homage not only to Once as a whole but to those two characters. They hear their grandson is in trouble, so they’re going to show up!” 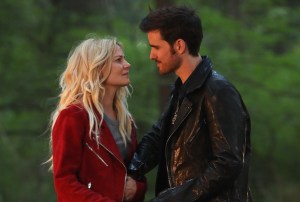 “There are final moments, really, for everyone” — sometimes via “the magic of movies,” Morrison says with a wink. Scene partner O’Donoghue offered this tease for the “CaptainSwan” faithful: “They a lovely little moment,” quite possibly with a child in tow. “Anyone who is a fan of Hook and Emma being together will get a kick out of it.”

“I think we hit on all the ‘greatest hits’ of the show, and hopefully there’s emotional closure for everyone,” Horowitz offers. “There has been a lot of emotion on the set and in the writing of it and in the producing of it, and hopefully for the audience watching it. We’re proud of the show as a whole, but these last couple of hours, in particular, everybody has really kind of come to play.”

And if anyone still has trouble closing the book on Once, after the finale fades to black? “You can always just pop in that DVD, click on Netflix or tap into the episodes on your DVR when you’re missing us!” suggests Parrilla. “It’s been a special show — and not just for me personally, but for many people, and I’m grateful that it will always live.”

Want more scoop on Once Upon a Time, or for any other show? Email InsideLine@tvline.com and your question may be answered via Matt’s Inside Line.