OK, so it turned out that the biggest challenge for viewers during The Voice’s Challenge Week was not laughing at what in a number of cases passed for challenges. (“I’ve never sung a song that started with the letter M before” — yeah, it was basically like that.) Nonetheless, Monday’s performances were still overall very good, I thought. Your comments begged to differ, but that’s the beauty of music, isn’t it? Two people can hear the same thing two completely different ways. At least I think we all agreed that Kelly Clarkson served a dazzling reminder of what a pro is supposed to sound like.

Going into Tuesday’s eliminations, Team Blake’s Kyla Jade and Pryor Baird, Team Kelly’s Brynn Cartelli and Team Alicia’s Britton Buchanan were all sitting pretty, selling well on iTunes. (If they don’t end up being the Final Four, I’ll eat Kaleb Lee’s Stetson.) If TVLine’s poll was any indication, Christiana Danielle might also have made a few new fans with her rendition of “Ain’t No Sunshine.” I was sorry to see that Jackie Foster wasn’t faring better after her stunning Sara Bareilles cover, but maybe she was getting more votes than downloads. (I can’t be the only one who likes it better when she sings instead of yells!) 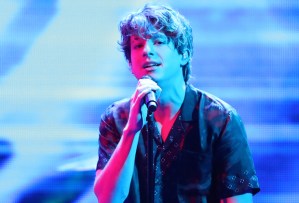 Before we learned which singers would be singing for the Save, we were treated to performances by Charlie Puth, whose “Done for Me” was cool enough to give me goosebumps (but did it look to anyone else like he was singing to a prerecorded track rather than live, or was that my imagination?), and 5 Seconds of Summer, whose “Youngblood” made me wonder what Hunter Plake is up to these days (and gave me no doubt that this was being performed live — and well). Also, the Top 10 tried to guess their coaches’ hits with only emojis as clues, and let their moms tell adorable tales on them. (And seriously, if Britton Buchanan was any dryer, he’d be a martini.)

Christiana Danielle (Team Alicia), “Unchain My Heart” — Grade: B | Given how great Christiana’s lower register can be, this seemed like a fantastic song selection for her. And though her vocals have been historically hit-or-miss, she was pretty much spot-on Tuesday. (If she’d been consistently this good, she might not have been in the bottom!) Yeah, this was pretty damn good. Or, as her coach put it, she was “magnificent” and “magnetic.” 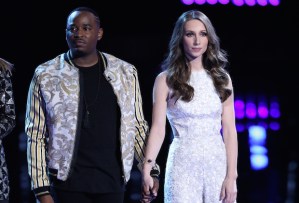 Jackie Verna (Team Adam), “I Told You So” — Grade: C+ | Wow — at first, I couldn’t say whose performance I preferred between Jackie and Christiana’s. The latter’s was super cool, but the former’s… jeez, it was honey-soaked and so sweet. I thought she might have had it in the bag until she hit a pitch problem midway through that left her in tears by the end, clearly sure she’d blown it.

Rayshun LaMarr (Team Adam), “Let’s Get It On” — Grade: C | Once again, Rayshun looked like he was having a blast up there. And he sounded decent, too — maybe a little uncontrolled, but hey, this was make-it-or-break-it time. It was go big or go home, and he opted to go real big. In the end, given his difficulty connecting with the audience throughout the season, I suspected — incorrectly, it turned out — that he had been too over the top to get the vote.

So, did you think the right singers were eliminated? Which cut hurt the most? Vote in the poll below, then hit the comments.