It’s the moment New Girl fans have been waiting for since the Season 7 premiere: Nick and Jess… got a dog! Oh, and they also got engaged. So how did the proposal go down? Read on to find out.

After a series of unanticipated mishaps, Nick and Jess found themselves chasing after their new dog Mario. They finally caught up to him at a nearby park hosting a “Totally ’80s” outdoor movie night, where Nick got down on one knee and popped the question in front of all their friends. It wasn’t how he planned it (he had reservations at Beso, the very restaurant where he and Jess had their first date in Season 2), but Jess didn’t care. To her, this was perfect.

“Nick, I want to spend the rest of my life with you,” she said. “I want to raise this dog with you, and have babies, and eat good food, and laugh and take care of each other, and I want it to start tonight. It’s you and me. It’s always been you and me.”

She then said “yes,” and wouldn’t ‘ya know it, the movie being screened behind them was none other than Dirty Dancing. The newly engaged couple kissed as “(I’ve Had) The Time of My Life” played in the background.

* Schmidt returned to work, but quickly discovered that his heart’s no longer in it. He and Cece then decided it would be best if he remained a stay-at-home dad. What’s more, they’re officially trying for Baby No. 2! 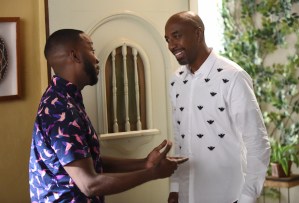 * Jess attempted to reunite Winston with his estranged father Van. Just one problem, though: The Van Bishop she found online (played by Curb Your Enthusiasm’s J.B. Smoove) was not in fact the Van Bishop, but a different Van Bishop who happens to live in the greater Los Angeles area. Guess that’s one branch on Winnie the Bish’s family tree that won’t be filled before next week’s finale.

* Despite Jess’ screw-up, Winston and Aly asked her to be their baby’s godmother.

Did the New Girl proposal live up to your expectations? And what are your hopes for next week’s series finale? Drop a comment below.