It seems Jiya has really taken to time travel.

After journeying to 1981 in this past Sunday’s Timeless, the brunette goes much further back in time to San Francisco’s Chinatown circa 1888 in TVLine’s exclusive first look at the NBC drama’s two-hour finale (airing at 9/8c).

In the photo below from the second half of Sunday’s Season 2 ender, “Lucy, Wyatt, Rufus and Flynn search for Jiya in a Chinatown photo studio,” co-showrunner Tom Smuts, who wrote the hour, previews. So how did Jiya get separated from the team? Well, you’ll just have to watch Part 1 of the finale to find out. As for the shock on her cohorts’ faces? Let’s just say they’re in for a big surprise.

Of course, the foursome eventually do find their friend, as seen in the image above. But curiously, they reunite “in a San Francisco Barbary Coast tavern in 1888 where Jiya has been hiding from the Time Team,” Smuts shares. Once the group is all back together, Lucy, Rufus and Wyatt must “convince Jiya to confront fate and return with them to the present.”

Scroll down for a preview, then hit the comments with your hopes for the finale! 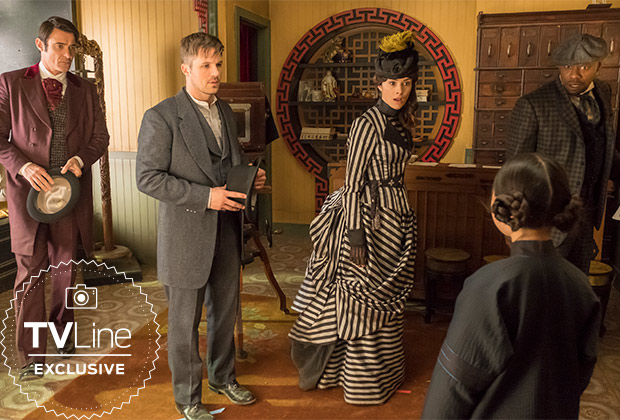