Fear the Walking Dead fans may not have seen the last of Rubén Blades’ Daniel. Although in the AMC drama’s Season 3 finale, he was standing atop the Gonzales Dam when it blew up — and he’d just been shot by Strand! — Andrew Chambliss, who now runs the show along with Ian Goldberg, says that “there is a very good chance that he will appear in the Walking Dead universe. 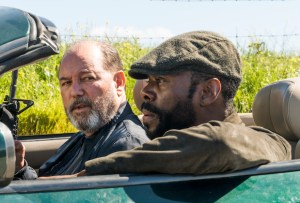 “He is alive and out there,” he adds. But “the details surrounding that are something that we’re still keeping under wraps.”

That Ofelia’s father would have beaten the odds to rise again might not come as the biggest shock ever to viewers. After all, as Chambliss himself acknowledges, “He’s [made it through] a fire in a wine cellar, then getting shot in the face and then a dam explosion… He’s definitely a survivor!”

So, are you hoping Daniel will return to Fear? Or, since Chambliss mentions not necessarily his own show but “the Walking Dead universe,” do you think he’ll turn up on The Walking Dead in Season 9? Hit the comments.