A wide-eyed young woman relocates to New York City to expand her palate, both literally and figuratively, in Starz’s new drama Sweetbitter. Is the series adaptation of Stephanie Danler’s buzzy 2016 novel — which premiered Sunday — something you’ll want to gobble up right away?

Before you answer, a quick recap:

We meet young 20-something protagonist Tess (Miss Peregrine’s Home for Peculiar Children) as she’s packing up and moving to Manhattan from Ohio with little more than her clothes and her car. Her acclimation to the Big Apple involves moving into a rundown apartment, selling her ride to make rent and scouring the city for a much-needed job. Oh, and because the series is set in the early 2000s, she’s doing it all with the aid of MapQuest printouts. How quaint! 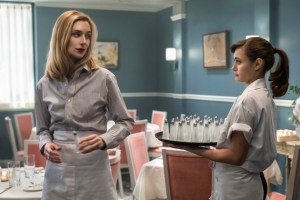 Despite a severe lack of waitressing experience, Tess somehow lands a tryout at an upscale restaurant, a chic establishment presided over by reserved manager Howard (Paul Sparks, House of Cards). Though Howard seems to think Tess has the potential to be a back waiter — or secondary server/busboy — the rest of the close-knit staff begs to differ. The front-of-house staff includes Will (Evan Jonigkeit, Girls), who’s tasked with training Tess; Sasha (Daniyar, Claws), a Russian who’s desperate to become a United States citizen; Ariel (newcomer Eden Epstein), a take-no-prisoners lesbian; and Simone (Caitlin FitzGerald, UnREAL), the queen bee server with an encyclopedic knowledge of wine and a sharp — though not necessarily friendly — interest in Tess.

None of the servers are particularly inclined to help Tess get through her tryout, and she makes a ton of mistakes (sitting at a table with a customer, forgetting to finish filling salt shakers, etc.) as she learns how to navigate the busy eatery’s flow. Simone, in particular, offers this harsh horoscope: “You took this job because you thought it would be easy. Fast money, safe place to wait. You have gotten by on your charm for so long that you have developed a character. Well, that won’t work here. You’ll be back to whatever sad story you came from in a week, and you will have missed the opportunity to become a person.”

Overwhelmed, Tess eventually finds herself near tears in a corner of the kitchen. That’s where brooding bartender Jake (Tom Sturridge, The Hollow Crown), who caught her interest earlier in the episode, finds her and invites her into the walk-in refrigerator. He opens an oyster, which she’s never tried, and invites her to try it. “What do you taste?” he asks after she sucks down the crustacean and has a near-religious experience. “Salt,” she replies. “I taste salt.”

Then: “Can I have another?”

Now it’s your turn. Grade Sweetbitter‘s premiere via the poll below, then hit the comments with your in-depth thoughts on the new series.