With only three episodes left — including its two-night series finale (airing May 11 and 18) — ABC’s Once Upon a Time (Fridays at 8/7c) is running out of time for Hyperion Heights’ still-cursed denizens to get their “wake-up” call. But whenever that alarm does go off, it’ll be an emotional doozy.

Read no further if you don’t want a fun “taste” for the inevitable awakening. 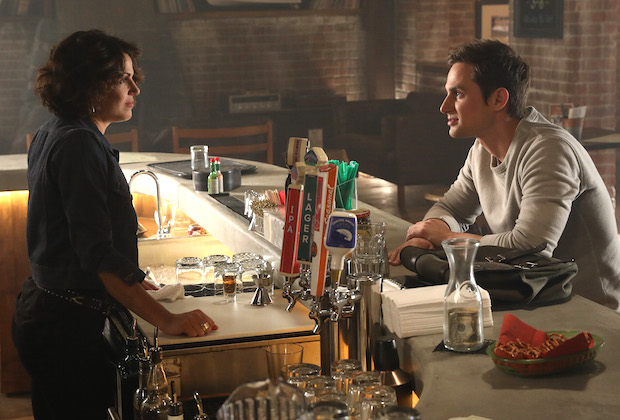 Henry Mills, of course, has believed himself to just be a one-time author/sometime podcaster, though as of late he can’t help but wonder if he is something more — especially since a blood test suggests that he fathered Lucy with Jacinda, whom he never bedded!

“The way that Henry wakes up I think is extremely well done and very surprising,” Andrew J. West told TVLine during our visit to the show’s Vancouver set, where the series finale was being filmed. “We see him wake up in a unique way that I don’t know that we’ve seen any other character wake up before.”

Without disclosing what exactly triggers the magical “pulse” that snaps everybody out of it — after all, his and Jacinda’s “first kiss” didn’t get the job done — West said that Henry’s awakening was “one of my favorite scenes to shoot,” as two sets of memories converged into one. “It was fun to make that shift and then be that [Storybrooke] guy again but wearing the skinny jeans and the plaid shirts.”

And when Henry finally lays eyes on his mother, whom all this time he thought was just bar owner Roni? “The first time that we see him with Regina after he’s been awoken is a really intense, cool moment,” he teases. “That’ll be something that’ll be really, really fun for the fans.” 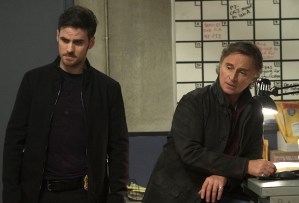 The Wish Realm’s Captain Hook, meanwhile, has been maintaining law and order on the streets of Hyperion Heights as Detective WeNeverGotHisFirstName Rogers, where he is partnered with Rumplestiltskin’s un-cursed persona, Weaver. And though this Hook and Rumple had reached a détente in the other realm (as seen in a recent, sweet flashback), there’s still fun to be had when the former discovers their new alliance.

“When Rogers suddenly realizes that he’s been Rumpelstiltskin’s partner for whatever length of time, it’s a bit of a shock for him,” says Colin O’Donoghue with a chuckle. (As TV daughter Rose Reynolds put it: “Colin looks over at Bobby [Carlyle] and says, ‘Crocodile…?'”)

Hook’s other reunion — with daughter Alice aka Hyperion Heights’ Tilly — is decidedly less comical. “We’ve still got our poison heart situation, so it’s very bittersweet,” reports Reynolds. “I can’t even hug him!” Also perhaps muddying the mood is the fact that Tilly is currently being pressured by Gothel to help fuel a new spell. Will the lass wake up in time to bail? 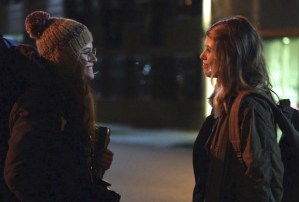 As for a woke Margot/Robin reconnecting with her love Tilly/Alice, Tiera Skovbye promises, “It’s a really cool moment” — though one that soon enough takes a very big (or should we say very small?) turn. “There’s a lot that happens,” Skovbye hints with a laugh.

Elsewhere in the Heights, Jacinda/Cinderella, Sabine/Tiana and Drew/Naveen are caught up in a dire situation of their own when they collectively wake up. Without spoiling how the trio then swiftly (and amusingly) swing into action, Mekia Cox says, “They jump right into hero mode, which is fun.”

And heroes will be in high demand as the fantastical drama draws to a final close.

“There is a challenge that arises from within, hopefully coming from an unexpected place,” Once co-creator Adam Horowitz told TVLine, “and that spins us into the finale.”