Killing Eve is pulling off a rare feat in today’s TV landscape: Its ratings have climbed in all four weeks since its April 8 series debut.

The good ratings news comes from a glowing press release issued by BBC America on Friday, noting that the Sandra Oh-starring crime thriller has grown a total of 33 percent in total viewers (Live+3) and 61 percent in viewers aged 25-54 since its premiere. In fact, Eve is “the only new ad-supported drama in more than a decade to show consecutive ratings growth over its first four episodes across total viewers and both key demos,” per the release. 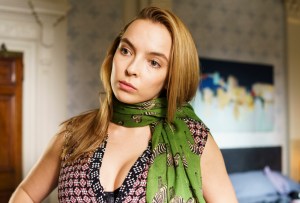 Eve — written by Fleabag‘s Phoebe Waller-Bridge — stars Grey’s Anatomy alum Oh as intelligence analyst Eve, who’s hot on the trail of a sadistic female assassin named Villanelle (Jodie Comer). Thanks to positive critical buzz — including this very publication — BBC America went ahead and renewed Eve for a second season before it even premiered. (Season 1 currently airs Sundays at 8/7c.)

“We could not be prouder of Killing Eve, or more pleased and gratified by the viewer response to this kick-ass thrill ride of a show,” BBC America president Sarah Barnett said in a statement. “From our first conversation with Phoebe, to casting Sandra and Jodie, this has been a joy every step of the way, and we so appreciate the fan and critical response to this unforgettable first season. We can’t wait to share these final four episodes and are already looking ahead to Season 2.”

Already hooked on Killing Eve? Drop your thoughts on Season 1 so far in the comments.