This week on ABC’s Marvel’s Agents of S.H.I.E.L.D., Coulson served as wingman when a gravitonium-infused Talbot went to meet with Qovas, Hydra’s liaison with the Confederacy. After levitating them straight up into the sky and to the space cruiser on the slab of Lighthouse floor on which they stood, Talbot quickly made clear to Qovas just how powerful he now was, by crumpling a foot soldier with a flick of the wrist.

Forcing Qovas to kneel before him, Talbot demanded a meet with the Confederacy leadership, but Qovas warned that such an invite was not scored easily. GraviTalbot, though, is not one to take no for an answer, so he brushed up on Confederacy-style decorum, borrowed someone’s Braun shaver and clad himself in a regal robe. Talbot and Qovas then teleported themselves to the meeting place, where the rest of “The Six” immediately scowled at the arrival of an Earthly “charlatan.” When one of them noted that the leadership by design only has six seats, you could count the seconds until Talbot — having anointed himself “Earth’s Mightiest Hero” (hmm)– decided to create a vacancy by crushing the member who had been deemed the wisest.

Afterward, Talbot met in private with Qovas and Taryan, a member of the Kasius clan. The Kree shared that the Confederacy never intended to hold up their end of the bargain with Hydra, because there is no fighting off the alien threat known as Thanos, who was already in the process of invading Earth! (Brief movie talk: By my math, this is the night after Ebony Maw’s arrival in New York, which is about when Cap, Wanda and Vision were arriving in Wakanda. End movie talk.) Talbot was about to make a dash for the planet’s surface and team up with the Avengers when Taryan warned, “You will lose, even with your powerful friends.” But there may be another way, the Kree pondered…. 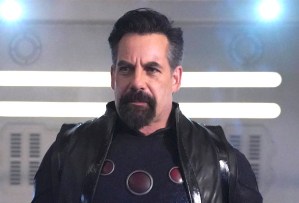 Looping in Coulson and Hale on this new intel, Talbot insisted that with the Confederacy running scared, he was up to the task, as “The Shield” — provided that he gets turbo-charged with even more gravitonium, from an untapped stash beneath Earth’s surface. When Coulson questioned the crazy idea, the increasingly paranoid Talbot interpreted the argument as betrayal. Things escalated further when Coulson learned that Talbot was in cahoots with a Kasius, knowing as he does that the Kree clan rules/enslaves what’s left of Earth in the future.

When Daisy and May arrived aboard Qovas’ cruiser via the Zephyr’s first space flight, Talbot cried mutiny. And when Hale vouched for Quake, Talbot crushed the general like a bug. He then KO’d Quake, impervious to her powers, and forced May to drop her gun, lest Coulson get crushed. Talbot declared the S.H.I.E.L.D. trio “prisoners of war,” to be treated thusly. And in the bonus scene, we see that Daisy has been sold off to Taryan.

* Daisy and Yo-Yo got into it, super-physically, when the former returned from her “dark” mission with a possible fix for the dying Coulson, until a pistol-packing May intervened. Daisy then handed off the Centipede serum and her momma’s dug-up bones/DNA, tasking Jemma to cook up a cure for Coulson.

* Mack and Fitz had overdue words about when the latter locked up the former — as well as about Yo-Yo’s controversial killing of Ruby. Mack argued that killing has never been S.H.I.E.L.D.’s go-to move, while Fitz contended that there have been instances in history where the few had to be sacrificed to save the many. Mack walked away, advising Fitz that something in him needs fixing.

* Deke tried to cozy up to Daisy, only to get an earful about the bodies left in her wake — including Lincoln, the first Inhuman she ever get close to. Pivoting away from his intended outpouring of heart/lemons, Deke announced that he was FitzSimmons’ grandkid, which Daisy said made all the sense in the world.

What did you think of “The One to Save Them All”?