Some reality TV villains, while problematic, are still fun to root for — but The Vixen isn’t one of them.

She’s been sucking the joy out of RuPaul’s Drag Race all season, and she took it to new heights on Thursday’s episode by fully coming for Eureka, arguably the group’s most abundant source of joy.

It probably wasn’t a great sign when, at the beginning of the episode, Vixen announced how proud she was to be considered a “bear.” (No, not that kind of bear.)

Mama Ru kicked off this week’s episode by inviting the remaining eight queens into the library for some light reading. It was a lot of what you’d expect — mostly jokes about Eureka’s weight and Vixen’s garbage hair — but one queen clearly rose about the rest. Eureka had the competition gagging with her jabs, save for The Vixen, who rolled her eyes so hard at Eureka’s routine that they nearly fell out of her damn head.

You never know what you’re going to get with Snatch Game, but I’m pleased to report that the Season 10 queens brought it… for the most part. The panel did feature some brilliant performances, like Monet X Change’s Maya Angelou (“Like dust will I rise!”) and Eureka’s Honey Boo Boo (the role she was born to play!), but there were a few hot messes, like Asia O’Hara’s awkward Beyoncé and Vixen’s obnoxious Blue Ivy. (Worst. Double. Act. Ever.) 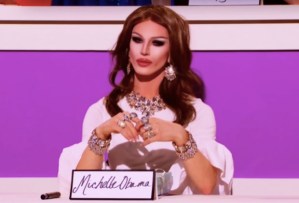 My personal favorite was Aquaria’s spot-on Melania. (Watch your back, Laura Benanti!) From addressing Ru as “Barack” to slipping him a secret “Help me!” sign, she never wavered in her performance.

But the real action came after the show. As seen in the sneak peek TVLine posted this morning, Vixen chose to attack Eureka, accusing her of “stepping on other people” and being generally unprofessional. I actually give Eureka a lot of credit for keeping her cool in the midst of all that B.S. Even Monet pointed out (albeit in a confessional) that Asia was the one who kept interrupting people during the game.

For this week’s runway, the queens paid tribute to Bette Midler’s iconic mermaid-in-a-wheelchair bit by sashaying — with a little push from the Pit Crew — in full undersea-princess eleganza.

We can fight all day about which queen served the fishiest… well, fish… but my personal favorite was Aquaria’s inspired oil slick victim: 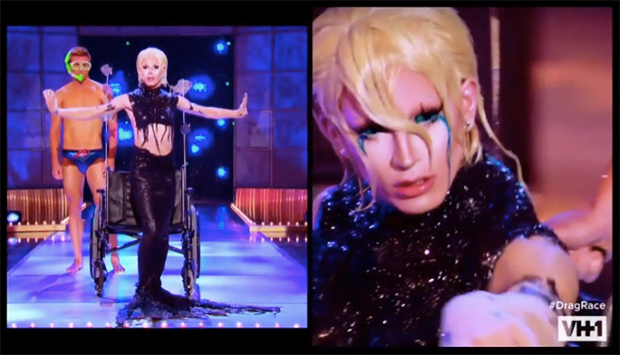 She hooked me (and apparently the judges) from the start, but she reeled me in with the ridiculous description of her tears: “I can’t see anything except for cyan.”

After wheeling the safe queens backstage, Ru played a nasty little game with this week’s tops and bottoms, asking each of them to say who they’d send home. Vixen jumped at the chance to pick Eureka, but unlike the other queens — who kept their rationale to a simple sentence or two — she went into great detail about how much she wants her gone, even calling the judges’ collective taste into question.

“It baffles me that you guys enjoy her so much,” Vixen told them. “She takes all the air out of the room.” She then called her “childish, which is why the characters she’s played have worked so well for her.”

Once again, I applaud Eureka, who got the last laugh when Vixen ended up in the bottom two with Monique Heart. (Is it messed up that I loved watching each of the queens choose Vixen as the one they would have sent home?)

Both Vixen and Monique gave their all in a lip sync battle set to the musical version of gay fly paper: Carly Rae Jepsen jam “Cut to the Feeling,” even if Monique clearly didn’t know any of the damn lyrics. But in the end… Monique was sent sashaying away. That’s right, the Vixen lives to stir s–t up another day.

Your thoughts on this week’s elimination? Vote for the queen you would have eliminated below, then drop a comment with whatever’s on your mind.