Adrian Pasdar‘s foray into full-on facial hair will serve its pre-destined purpose, now that Marvel’s Agents of S.H.I.E.L.D.‘s Glenn Talbot has transformed into a version of the comic books’ goateed Graviton.

But surely, ingesting allllll the gravitonium cannot be good for the already-addled general, right? Heck, tasting just 8 percent of the goop made young Ruby go boom!

TVLine invited Pasdar to preview best he is able Talbot’s gambit, his and Coulson’s meeting with some VIP aliens, and a possible Supergirl encore.

TVLINE | How much of a heads-up did you get on this major development for your character?
I was given a clue at the end of last year — under the umbrella of, “Don’t say a word to anybody or you’ll never breathe another breath again.” I’m not saying that to you; that’s what they said to me.

TVLINE | That’s great because I have to tell you, when you popped up in during this arc, I was worried that they were bringing you on as cannon fodder. I was like, “No, Talbot deserves so much more than that.”
The funny thing is I think all the writers — Jed [Whedon] and Jeff [Bell] and the whole writing team — have always had a special place in their heart for the character, and it’s evident in the writing. I feel like he’s got a special place in comic book lore, and they’ve respected that from the beginning.

TVLINE | I can tell, because Talbot’s really had an arc over these seasons — and the fact that you keep coming back tells me that you’ve really been digging playing him.
It’s fun when you have a whole team of writers that really like writing for someone; you always end up with some really great lines. And that in the end is what makes it fun, because by its very nature television is disposable. But the one thing that Marvel’s done is prove, “Maybe not. Maybe there’s some stuff that ties into the feature film world,” and they’ve been very good about that through the course of these five seasons.

TVLINE | If I were to ask Talbot right now how he’s feeling, what would he say? How’s he feeling coming out of that gravitonium chamber?
I think powerful. On the edge of redemption. He’s feeling like there’s a chance he may be able to redeem his past mistakes.

TVLINE | So he’s got his head on straight?
I mean, sure — though I imagine “straight” is a relative term.

TVLINE | I only ask because young Ruby didn’t take too well to the gravitonium infusion.
Right. Well, nobody’s taken 100 percent of it. Sometimes you’ve got to go all the way! We’re going to find out what happens. Maybe it was a really bad idea. Maybe it wasn’t. 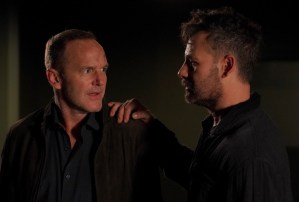 TVLINE | In this week’s episode, Talbot takes Coulson to meet with the Confederacy. How is that going to go?
I can’t tell you, but I can say that you know when you’re traveling to meet the leader of another faction, the person you bring with you, I think, speaks volumes — and there’s nobody I would rather have in a situation like this than my best wingman. How this manifests, how it devolves or evolves, that’s the nature of the episodes, so I can’t get into that too much. But there are spikes and there are elements of “Didn’t see that coming!” for sure.

TVLINE | What has me worried is we know the Confederacy wants the gravitonium. All the gravitonium is inside you now, so…
Yeah, that’s like bringing a salmon to a cat. They would like very much to have the gravitonium, but I think when somebody’s facing you and they’re 100 percent infused with it… how do you get to it?

TVLINE | It’s kind of like putting the toothpaste back in the tube. But in reverse.
Right, exactly. You can’t un-ring that gravitonium bell.

TVLINE | Are we going to hear the name Graviton during the episode?
Gosh, I can’t answer that question….

TVLINE | There is no hands-on-hips, “I… am… Graviton!” moment?
[Laughs] Although Talbot’s ego is enormous, I don’t think he has labeled himself that. 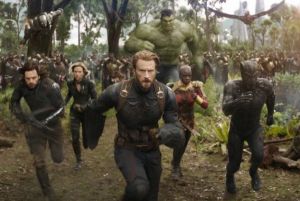 TVLINE | While all this is going on, are we going to see the team at the Lighthouse get wind of the events of Avengers: Infinity War? Candy Man last week had that passing reference to “crazy stuff” happening in New York.
That’s a good question. They always do tie in very well with what’s going on in the cinema. Yeah, we do have stuff in the background periodically that references and ties into what’s going on with Avengers: Infinity War. Yeah, they use that.

TVLINE | Have you seen the movie yourself?
I haven’t seen it yet. I was invited to the premiere and I just couldn’t make it.

TVLINE | You’ve voiced Iron Man in a lot of the animated stuff, so I thought you might have a vested interest in seeing how Tony Stark fares.
I do; I just don’t get out as much as people think I do. I mean, I feel like a vegetarian butcher. I work in the business, but I don’t sample the wares. 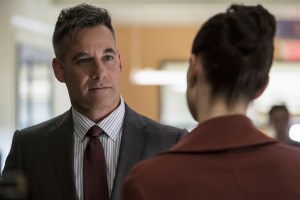 TVLINE | Catherine Dent (S.H.I.E.L.D.‘s General Hale) guest-stars on Arrow this week, so she joins that elite group of people who have played in both the Marvel and DC universes. You did same, with Supergirl. Any chance of us seeing Morgan Edge again?
I would think so. Yeah, I would think so. I was trying to get up there for the finale this year, but it didn’t work out because of the timing of everything.

TVLINE | That Morgan Edge is a real SOB, man.
Somehow they always have me playing those guys, I don’t really understand that. [Laughs] They’ve had a good time writing for that character, and it’s a lot of fun. I look forward to getting back up there.