By George, I thought Rayshun LaMarr had done it! Though when The Voice revealed its lowest vote-getters of the Top 12 last week, he’d been in the Bottom Two, Mr. Sunshine seemed to have turned it around Monday with his spirited Top 11 performance of “Try a Little Tenderness”: As of Tuesday morning, he was Top 4 in TVLine’s poll, and his single was the fourth-bestseller of all the contestants’ on iTunes.

That being the case, singing for the Save was likely to be some combination of Sharane Calister, whose version of Mariah Carey’s “Hero” had been anything but super; Christiana Danielle, who forgot to make “staying in key” a priority on her inventive “Umbrella” cover; and Kaleb Lee, who even on “T-R-O-U-B-L-E” had been B-O-R-I-N-G. Before we found out, we of course played the waiting game with which we’re so familiar. 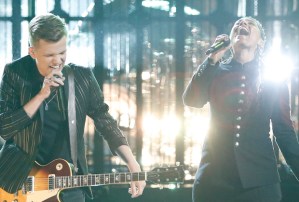 First up, in performing “Make Me Feel” — which sounded like the musical love child of Prince and Jacksons Michael and Janet — Janelle Monáe taught the contestants the difference between just singing a song and putting on a show. Next, Team Adam joined their coach on a rendition of Coldplay’s “The Scientist” on which Jackie Verna was the standout. (Could she be sneakily turning into this season’s Addison Agen?) Finally, Alicia and her team turned out a rollicking version of the Stones’ “Gimme Shelter” on which… really, they all sounded pretty good, especially Jackie Foster; this song was virtually made for her.

Sharane Calister (Team Adam), “If I Were a Boy” — Grade: D | The opening notes that Sharane sang made me ask, and not for the first time recently, what the hell happened to the Sharane who’d so dazzled us with her Blind Audition? Was it just a lack of training showing? She clearly was putting her all into her performance; unfortunately, it seemed like she didn’t have any idea what to do with “her all.” As long as Christiana didn’t literally fall off the stage, this was hers to lose. 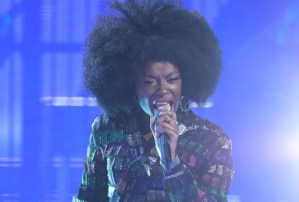 Christiana Danielle (Team Alicia), “A Thousand Years” — Grade: C- | Eesh. This performance wasn’t exactly a wow, either. As she so (too) often does, Christiana sounded pitch-imperfect. (Remind me again why Kelsea Johnson got cut over her!) Still, her Christina Perri cover made me wince less often than did Sharane’s attempt to earn an A doing Bey. So I guess that’s, in the worst possible technical sense, a win?

So, were you satisfied with the results? Which singer would you have sent home? Vote in the poll below, then hit the comments.