This week on The Flash, we and the team were finally enlightened about The Thinker’s grand plan, while flashbacks revealed what led Marlize to join Clifford’s mission. Plus, more Mystery Girl!

First off, in flashbacks we saw how Marlize and Clifford “met cute” when he challenged her during a panel discussion on something super-thinky. He asked her out after, they danced at a picnic date, and then shacked up. But during the move, Marlize found the journal/”radical manifesto” in which Clifford dissed technology as a curse on humankind — as well as his plan to cure it. When he invited Marlize to be his partner in this noble endeavor, she exited stage left and signed on with the Peace Corps in Kenya. But when a militia attacked and slaughtered innocents, all to seize “a simple piece of technology” — the water purifying system she developed — Marlize saw the (en)light(enment) and declared herself on board.

As for the here and now, DeVoe and Marlize began stealing the components needed to put The Enlightenment into action, and the variety of stolen goods puzzled Team Flash for a bit — until a chat with Iris led Barry to realize the pieces don’t fit together to create one machine, but several. Specifically, a set of satellites that, Harry later chipped in, were capable of bathing Earth in so much dark matter that every human brain would be reduced to a “simplified state.”

During his final bit of thievery, DeVoe was blindsided by The Flash, then vibed by Cisco and Gypsy. When that didn’t quite detain him, Caitlin showed up with a cold gun to ice him over, though he also broke free of that. Having immobilized all the heroes (which bus meta’s power was that, someone remind me?), DeVoe went to make an example of Gypsy, and began choking her. When Marlize refused to watch him kill another innocent, damn, he forced his wife to face him! But Marlize pleaded just enough to make him stop short of killing Gypsy, before they slipped away into their pocket dimension.

Back at their lair, Marlize declared to Clifford that she was leaving him, smartly first protecting herself with a force field. When he asked, “But what of our vows?,” she argued that The Thinker’s first victim was her husband, that he now wanted not to change the world but rule it. Clifford bragged that she too will now be a victim of The Enlightenment, that he will be “all that remains.” Pfft, she sniffed. “You’re nothing without me.” 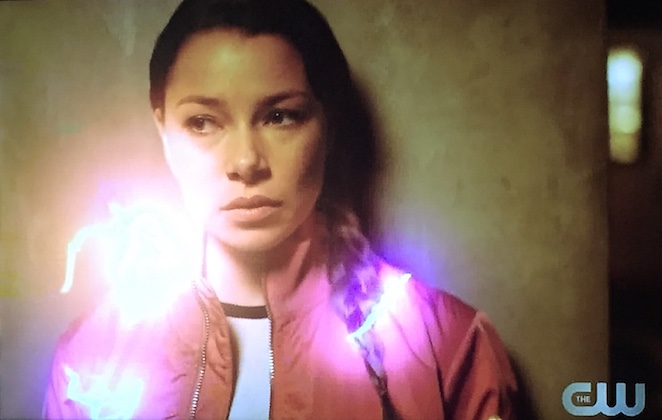 * Having been tasked by Joe to distract Cecile while a surprise baby shower was planned, Harry opened up to her, as well as all of Team Flash, his brain drain — only for them to later realize that she can read his brilliant thoughts before they disappear!

* Caitlin’s experiment to “trigger” her latent Killer Frost DNA are yet to be successful. Ergo, cold gun.

* When DeVoe-fighting circumstances compelled Cisco to enlist Gypsy’s help, it forced the two to come to terms with their multi-Earths relationship, and how him taking her dad’s job might fix things. After they realized that neither of them really want him to take the job, they ran into the true crux of the problem: Cisco wants more from their relationship, while Cynthia is actually A-OK with how things have been. At episode’s end, they breach back to Earth-19 for a good-bye kiss.

* In this week’s “bonus scene,” Mystery Girl appeared to deliver a gift to Cecile and Joe at the baby shower, from “someone who wanted you to know how special you are, someone who understands that time is precious and ‘right now’ is all we’ve got (relatively speaking).” But when Mystery Girl saw Iris, she quietly sped away. And I do mean sped, because as we saw seconds later, she is a speedster — one with yellow (Barry) and purple (Iris) lightning! As showrunner Todd Helbing said in our May Sweeps preview, by the end of the finale, “Everyone will get an answer to who exactly The Mystery Girl is, and how she plays into not only this season but next season.”