Carrie and Saul’s plan to save Keane’s presidency took a sharp turn in Homeland‘s Season 7 finale… but then, it wouldn’t be a Homeland finale if everything went according to plan, would it?

We pick up where we left off, with Carrie posing as Simone in a brunette wig and hightailing it out of there with Anson at the wheel. He pulls over just short of the U.S. embassy, though, when police cars form a blockade to box them in. Carrie wants to distract them to give Saul time to put Simone on a plane back to D.C. to testify, so she ditches Anson’s car — “If things go wrong, this is the plan,” she tells him — and heads out on foot. When a Russian cop car starts to follow her, Anson hits the gas and smashes into the cop car head-on. Well, that certainly qualifies as a distraction. 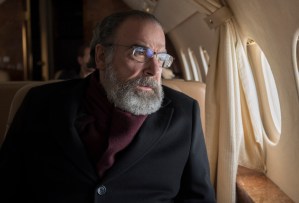 Meanwhile, Saul gathers his U.S. entourage to head home — with Simone stashed in the back of his van, sporting a very fetching blonde wig. (She should really try that look sometime when she’s not running for her life.) Saul gives her a passport with Carrie’s name on it to get out of the country, and Simone pointedly asks him: “You’re just going to leave her here?” Back at home,  President Warner confronts Keane when he sees the chaos in Moscow on TV, and Keane tells him it’s because Simone is alive — and yeah, she admits she wasn’t too keen (ha!) on looping him in.

A guard tries to stop Saul’s van, calling one of his group a “murderer,” but Saul essentially shouts “diplomatic immunity!” and shoves the guard, calling Warner directly for permission to pass through. Now Senator Paley knows they have Simone, and he warns Warner that Simone getting home and testifying would be very good for the ousted Keane… and very bad for them. So Saul and his van are forced to sit in limbo.

Carrie dives into a Moscow train station, but Yevgeny keeps an eye on her via surveillance cams. Ditching the red scarf buys her some time, and she slips into an empty storefront to hide. But the guards (and Yevgeny himself) close in on her… and Saul is still stuck waiting for Warner’s OK. Luckily, Warner comes back to the good side just in the nick of time, threatening to close the Russian embassy if Saul and his team aren’t allowed to go free. (He tells Paley to “get the f–k out of my White House,” for good measure. Yeah!) 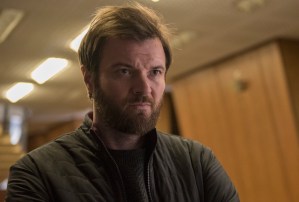 As the OK is radioed in, Carrie points a gun at the storefront door as guards hack it down with an axe. They take her out and, when Yevgeny realizes it’s Carrie and not Simone, he punches her square in the face. But it’s too late: Max tells Carrie that “Saul is away.” She looks back at Yevgeny, smiling up at him with a bloody nose. (Once again: yeah!) Three days later, Simone is ready to testify, and Paley is arrested for aiding the Russians while his chief of staff agrees to rat him out. (Serves him right.) Camera flashes buzz as Simone sits down to testify in front of Congress and confesses to being sent to “disrupt the American political system.” Saul’s team — Anson, Max, Sandy — watch on TV, and Keane arrives with Saul, happy to be vindicated. But where’s Carrie?

She sits in a Russian prison, while Keane tells the team, “I’m doing everything in my power to bring Carrie Mathison home.” (Yeah, that’s less than encouraging.) Carrie is led to a room where Yevgeny waits with a video camera; he wants her to record a statement saying this was all a CIA plot… and he threatens to withhold her psychiatric meds if she doesn’t comply (!). She says, “No,” but we can hear a quiver in her voice, and later, she tells a kindhearted guard named Alexander she’d “do anything” if he can get her those meds. 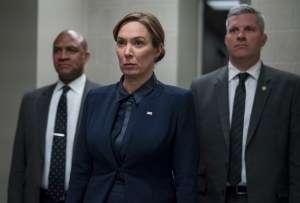 Back in D.C., Keane is re-sworn in as President, as her staffers and cabinet applaud — and even Wellington can’t get a peek at the speech she’s preparing to give. (Sounds like she’s got a Festivus-style list of grievances to air.) She’s aiming to level new sanctions on Russia via executive order, but Warner warns her against trying to govern without Congressional approval. Oh, and she meets with a groveling Paley, who begs her to reinstate his government pension to help his family. He literally gets on his knees… and she literally spits in his face. Who says our government doesn’t function anymore?

Saul works to free Carrie, offering the Russian ambassador three of his people in exchange. The ambassador wants a more high-level Russian named Goran back, though, and turns Saul away. And Carrie’s running out of time: Alexander manages to smuggle a pill in on her dinner tray… but Yevgeny reveals it was just a sugar pill. “Go to hell,” she spits at him when he gives her one last chance to betray her country. “No,” he replies. “I believe that’s where you are going.”

After a visit to her dead son Andrew’s grave at Arlington, Keane decides to switch things up: She’s ditching the teleprompter — and Wellington’s pre-written speech. Keane tells the country that the Russians have been attacking us for decades, but our divided nation made us an “easy target.” She admits that the attempt to assassinate her clouded her judgment, and apologizes for her draconian measures. So for the sake of healing the nation, she announces she’s resigning as President, with Warner taking her place, and pleads for both sides of the political aisle to “find common ground.”

One more time jump, to seven months later: Saul stands at the border of Russia and Estonia, grim-faced. He’s there to exchange Russian prisoners (including Goran) for Carrie, but he has no idea what shape she’s in after all this time. She’s led out by two guards, and she looks a wreck: long-haired, wild-eyed, face scrunched in a sad grimace. She runs right past Saul, and stumbles to the ground. Saul looks into her eyes, but she’s like a feral animal. Her eyes can’t focus. The Carrie Mathison we know… she’s gone.

Now it’s your turn: Give the Homeland finale a grade in our poll below, then hit the comments to share your thoughts.