The following contains no spoilers whatsoever from the movie Avengers: Infinity War.

This week, at least, the Agents of S.H.I.E.L.D. dealt with the Avengers’ erupting “Infinity War” by… accidentally shielding themselves from it.

God bless Coulson and his impatience with on-screen menus!

Getting barely a minute to regroup at the Lighthouse after Ruby’s short-lived turn as a gravitonium-infused Destroyer of Worlds, the team fought a small civil war of their own, debating Yo-Yo’s decision to slay Hale’s daughter. Skye was among those who argued that Elena was selfishly seeking revenge on the Lopper of Arms, while others saw the prudence in stopping Ruby in her tracks. So tense did the debate get, Mack would later call into question whether he and Elena would stay together!

And yet all of that would soon enough became small, Devils Tower-shaped mashed potatoes. Because after Daisy slipped away to meet up with Mack’s friend “Candyman” and possibly get a lead on Hydra tech to save Coulson’s life, the Lighthouse found itself in the shadow on a gigantic alien space cruiser. When Pornstached Puddy popped up to confirm an apocalyptic event was at hand, he led Lighthousers to the command monitor and a series of prompts. But because Coulson got impatient and pressed “2” for nuclear attack, instead of waiting to press “3” for alien invasion, the Lighthouse was locked down — for possibly 15 years!

Now you’d think that would manage to actually keep everyone safe from any alien intruders, but as Coulson soon realized, they were being targeted by members of the Confederacy — who thus had access to one of those Dalek-shaped teleportation gizmos. And soon enough, the Lighthouse was infested with power-sucking, foot-long-clawed Marauders!

As a result of the lockdown, the waning power and the loss of all communications, Coulson & Co. were oblivious to anything going on in the outside world — like, say, Thanos doing whatever he was doing. (I’m not seeing the movie until this weekend, so no spoilers here — and please clearly label in Comments any you care to blurt out.) Rather, only Daisy, during her rendezvous with Candyman, would get wind of “crazy” things happening in New York.

Daisy would receive from Candyman the results of his findings — Centipede Serum-based tech that John Garrett used, though lacking the special ingredient that provided healing ability. That key component, Daisy, would realize, was buried with her mother. Cue shoveling!

Meanwhile at the Lighthouse, they did best they could fending off Marauders with shotguns, Icers, blades and fire. But it is wasn’t enough. Lucky for them that addled, babbling Talbot found himself in the same room as the particle infusion chamber and impulsively fired it up, with himself inside, so as to “fix things.” And fix he did, oh boy, saving the team by crushing the aliens like foil balls, with but a twitch of his fingers. 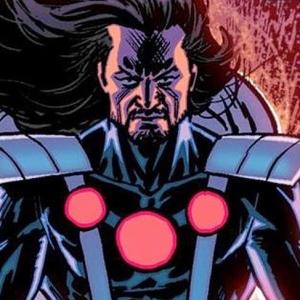 Has Talbot now become the Destroyer of Worlds? More apparently, he has transformed into the TV series’ version of Graviton (see right), as suggested by the promo/his wardrobe change for next week.

Also amid the mayhem: learning that Daisy sneaked out to seek a cure for what is ailing Coulson, Yo-Yo feared the unbroken time loop anew, regretfully explaining to the others how her future self made clear that letting Coulson die was key to survival. And yet, May countered, Robin foretold that Coulson will “put the pieces together.” Conundrum, indeed!

What did you think of the episode “Option Two”? And how might S.H.I.E.L.D. react now that the power is back on and communication with the outside world restored? Again, if you are compelled to spoil Infinity War, please label any such comments clearly.