For an episode that began with nine blindfolded queens sitting on different types of cake, this week’s RuPaul’s Drag Race was surprisingly dramatic.

MINI CHALLENGE: SITTING ON A SECRET

An homage to the eliminated queens’ iconic performance from All Stars 3, this week’s mini challenge required the contestants to blindfold themselves and identify a series of objects… simply by sitting on them. With RuPaul cheering them on from the sidelines (“If you want it, it won’t hurt!”), the queens dropped their dumpers onto everything from piles of marshmallows to big ol’ traffic cones. There’s a thin line between brilliance and madness, and this challenge sat right in the middle.

Why bother paraphrasing when I can just let Ru explain it herself: “You need to create your own Drag Con panels. Working in groups of three, you need to prepare a panel discussion, a demo and be prepared to answer questions in front of a live audience. One group will focus on body, one on face and another on wigs.”

Historically, no good has come from Ru letting the queens pick their own teams… just hurt feelings. But there was relatively little drama as the remaining nine split themselves into groups of three. Sure, there was some light shade thrown at Monet X Change, Eureka and Kameron Michaels — essentially Season 10’s answer to Rudolph’s Island of Misfit Toys — but it didn’t matter; the queen who ran her mouth about them would soon be lip syncing for her life. #Karma

Team Body: Monet, Eureka and Kameron
I’m a big fan of underdogs getting the last laugh, so this was my — and the judges’ — favorite panel. In addition to leading a fun, frank discussion about dragging up different body types, they put on a hilarious demonstration with one of the Pit Crew members, giving him the Kardashian body of his dreams. The other teams hated the ladies’ catchphrase (“proportion-izing!”), but only because they couldn’t think of a better one.

Team Makeup: Asia, Monique Heart and Aquaria
The queens’ discussion about how each of them got into makeup was boring at best, and things only got worse when Asia and Aquaria started talking over one another during the demonstration portion. It was like watching The View, only everyone was in drag. (So… The View?)

Team Hair: Blair St. Clair, the Vixen and Miz Cracker
No doubt about it, this show saved the worst panel for last. At first, it just felt off, almost like the queens were filmed at different times and green screened together like Alicia and Kalinda on The Good Wife. But then came the fighting, which was (I think) supposed to be funny, but just fell flat. Nobody was having a good time.

There were quite a few stunners on the runway this week, but in keeping with the category, I have to *ahem* tip my hat to Aquaria’s white rabbit homage (left), Eureka’s houndstooth suit (center) and Karmen’s Lady Gaga-inspired superhero costume (right): 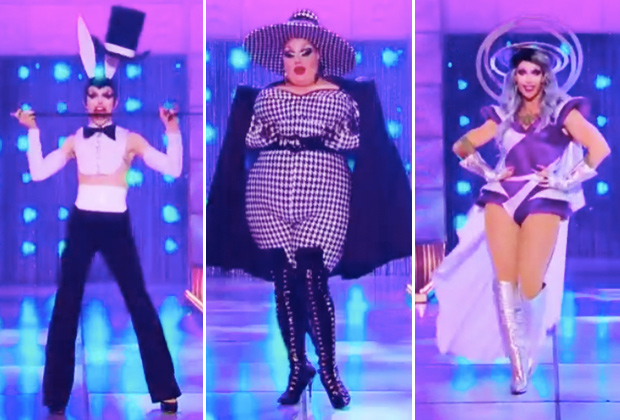 I almost reserved a spot in there for Asia — that dandelion hat was mesmerizing — but the overall look just wasn’t as cohesive as the others.

The members of Team Body were announced as this week’s Top 3 (no shocker there), with Eureka earning her well-deserved second win in a row. On the flip side, this week’s Bottom 3 consisted of Vixen, Cracker and Blair, who shared a heartbreaking story about a college rape being her first sexual experience.

In the end, it came down to Blair and Vixen battling to the tune of Diana Ross’ “I’m Coming Out,” and while I do declare that I was rooting for Blair to come out on top, she was simply no match for Vixen’s gymnastics and air-trumpet skills (even if it looked like she was playing the saxophone half the time).

“You haven’t seen the last of me,” Blair said upon exiting the workroom. Do I smell a redemption arc in All Stars 4… or maybe 5? At least Blair left us with a Smash reference to remember her by:

Was the right queen sent home this week? Cast your vote below, then drop a comment with more of your thoughts.