If the key art that Animal Kingdom dropped Wednesday is to be believed, Season 3 of the addictive TNT drama is going to be a real scream. 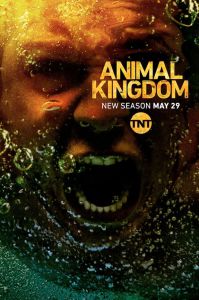 In addition to the new image at right, the show also released a fresh trailer, in which things seem to be going bloody terrible — emphasis on the bloody — for J’s girlfriend Nicki (Molly Gordon). Perhaps even more disturbing to the series’ fans, the clip offers not so much as a glimpse of Scott Speedman’s Baz, whose fate has been hanging in the balance since he was shot in the Season 2 finale.

The Ellen Barkin-fronted show returns Tuesday, May 29 with Denis Leary joining the cast as Deran’s ne’er-do-well father. (Is anyone on Animal Kingdom not a ne’er-do-well? Discuss.)

Press PLAY on the video above to check out the trailer, then hit the comments. Do you think the show is killing off Nicki? Baz? Both of them? Or it all just a big fake-out?