Grey Sloan Surgical Innovation Prototypes Day looked a lot more hilarious in Thursday’s Grey’s Anatomy than I remember Science Fairs being. Then again, I never attended a Science Fair the way that most of Grey Sloan’s doctors did these presentations: high as a kite on pot-laced cookies. Mind you, “Judgment Day” wasn’t all laughs — in fact, the hour thrust upon Jo an opportunity to take the lead, ready or not, on a major surgery, and revealed to Jackson why it had been such a mistake for him to waive the agreement that his grandfather had made with Rebecca. So grab a snack in case this recap gives you the munchies, then read on for all the juicy details. 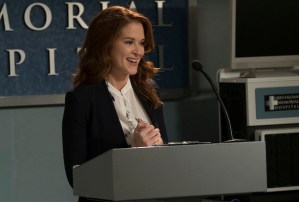 ‘WE CAN MAKE A BETTER VAGINA’ | As the hour began, Arizona handed out “lesbian gratitude cookies” to the staff as they assembled for the presentation of the prototypes. What exactly were lesbian gratitude cookies? Peanut-butter-flavored goodies given to Robbins by Dayna to thank her for busting “Dr.” Hanson and figuring out that she didn’t have cancer. Only what neither Arizona nor Dayna realized at the time was that the peanut butter in the cookies wasn’t ordinary peanut butter, it was cannabis peanut butter that Dayna’s wife Peggy had gotten her when they’d mistakenly believed that she had cancer. By the time Arizona found out and wobbled into Prototypes Day to retrieve the cookies she’d so cheerfully shared, half of her colleagues were flying high. In fact, by the time Mer warned everyone that the treats had been, er, “tainted,” Jackson had already included in his and Catherine’s vaginoplasty presentation clarification that he loved vaginas. “I came from one. This one,” he said, helpfully pointing out his mom. “Hers, actually.” (Cue April’s infectious giggle in 3, 2… ) Mind you, Jackson probably also needed the chill-out, having just learned from Catherine that the settlement between Harper and Rebecca that he’d waived was for sexual harassment. (Oopsie.)

After postponing the remainder of Prototypes Day, Mer instructed her colleagues not to perform surgery or even interact with patients. Since Jo hadn’t had any cookies, she was assigned… pretty much everyone’s work. “You’re so pretty,” Maggie told her. “You look like a cartoon.” Since she’d never been high before, Arizona advised that she needed to be around people to keep her safe. In response, Maggie said, “I don’t think I need my neck anymore.” Meanwhile, Jo rallied the interns, and Bailey paged Mer to the ER when she froze during surgery. She was, of course, doped up — with a patient open wide on the table! Mer, in turn, called for Jo. Grey was going to sub for Bailey until the accidental pothead smashed Mer’s hand on her way out of the ER. (Oopsie, part 2.) “I’ve never done a gastrectomy by myself before,” Jo protested. She’d do fine, Mer insisted. And actually, she did better than fine, using Richard’s prototype to get all the cancer while only removing part of the patient’s stomach. 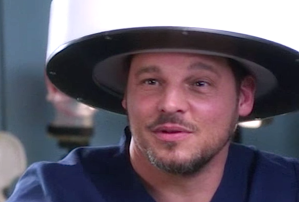 ‘THE CAVALRY’S HERE’ | After Owen called Amelia in a panic saying that DSHS was bringing his foster child that day, she took off to lend her support. And, since before leaving she happened upon Alex tripping, decided to take him along for his own good. “I can’t believe this is happening,” said Owen. But in a good way. Well, aside from Alex being there and high. When the social worker arrived with baby Liam, Alex dippily insisted that he’d come by to make sure the kid didn’t have rickets. Afterwards, since Alex was in no shape to be taken to a store, Amelia escorted them to Mer’s place, which, since she was a packrat, was going to have every baby supply Owen could possibly need. “How do you know what all of this stuff is?!?” Hunt marveled when his ex loaded him with gear. Though he was scared s—less, Alex reassured him that he was doing a great thing by fostering the baby. One of his foster dads had given a crap, too, and he’d never forgotten it. And you, he told Owen, “are giving so many craps right now.”

‘I LISTENED TO MR. T’ | Jackson might have needed a drink as well as a toke after Catherine filled him on more of his grandpa’s sins: There had been a whopping 13 cases of sexual harassment! Unfortunately for the mother/son duo, April overheard. And, her head spinning, she almost told Bailey, who was surprised to find that she’d never hated Kepner more. Elsewhere in the hospital, Jackson wondered why neither Catherine nor anyone else had ever tried to stop Harper. The hope, Catherine explained, had been that if the financial hits hurt the geezer enough, he’d do exactly that. Suddenly, Jackson realized that — ew — his own mom had been behind the payoffs. Floating, Bailey, having by then gotten the whole story out of April, said that she wasn’t surprised that Harper was a sexual predator. Kepner admitted that she knew Jackson and Maggie’s secret, too — that they were having an affair. But she had a secret of her own. “I’ve been seeing someone.” (Does it rhyme with Shatthew?) In turn, Bailey admitted that she was going to produce her Trail-Blazer with a sex-toy company. Things were a lot more heated between Jackson and his mom. She refused to be called out, saying that times had been different when Harper was pulling that crap, and she’d done the best she could to help the women he’d harassed. She was only sorry that Harper’s misdeeds might be about to bring down not only Grey Sloan but all of the Avery hospitals. When Mer caught wind of the scandal, Catherine suggested to Jackson that they start with Grey down the long road toward making things right. 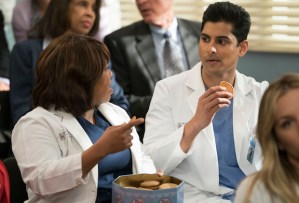 ‘I REALLY WANT SOME CHEESE’ | Talking through their highs while DeLuca lay on the floor in a fetal position and imagined that he was seeing Sam, Maggie talked a lot about dairy products while Arizona reflected on her having asked Carina to stay in the States for her. Later, Vik excitedly rushed in to help a patient, then since, he was high, freaked at the prospect of putting in a central line and got speared by a scalpel while fleeing. Back in solitary with DeLuca and Maggie, Arizona accidentally said Callie when she meant Carina. (Foreshadowing of her story’s ending, perhaps? Perhaps not — she deduced as best she could that everyone left her eventually, and she was just afraid of repeating the past.) When DeLuca’s buzz began to wear off and his vision of Sam vanished, poor guy broke down crying. (Get him a real love interest already, for Grey’s sake!)

‘YOU’RE FIRED’ | As the hour drew to a close, Mer confirmed that her mother had not been one of the women who’d been sexually harassed. But… ah! Marie Cerone was one of the women. That was why Ellis had taken her name off of her research. As the day came to an end, the evening news began reporting on the Harper scandal. So much for Jackson and Catherine getting ahead of it… ! Richard, having figured out that Vik had lied about not having had a cookie, canned him. (First Sam leaves, now Vik’s out… ) Owen ended his first day as a foster parent worrying about SIDS and rickets. Sweetly, Amelia elected to stay the night to pitch in if needed. (If I wasn’t mistaken, we got our first look at the family they might have had, had her brain tumor not made her bolt when Owen had pressed during their marriage to have a kid. Heck, it’s a family they might still have, no?) Oh, and Maggie finally got her hands on some cheese.

So, what did you think of “Judgment Day”? Whose performance did you find the most high-larious? Hit the comments.