Klaus Mikaelson has been a busy little beaver since we last saw him, much to the chagrin of all the corpses left in the wake of his European rampage.

The Originals returned (at last!) for its final season on Wednesday, picking back up after an eight-year time jump — and my how things have changed. Because the characters remain scattered all over creation (thanks, Hollow!), let’s start hopping the globe to see what our favorites were up to this week:

FRANCE | As I mentioned earlier, Klaus has spent the past few years getting back to his roots, ripping out hearts and beheading chuckleheads all over France. He’s also been visiting Elijah at his piano bar in Manosque, which is obviously a major no-no. (The wilting flowers and water turning to blood is proof enough of that.) And it wasn’t until a visit from good ol’ Caroline Forbes that he even considered returning home.

Upon their reunion, triggered by a phone call from Rebekah, Caroline wasted no time putting Klaus in his place: “I don’t know what year you think it is, Klaus, but I’m the mother of twins, I was married and widowed on the same day, and I’m responsible for an entire school full of kids — including yours. You know, the one you haven’t asked about? Why have you been avoiding her? She’s beautiful, and she’s smart. Maybe too smart for her own good, like her father.” (They spoke the last three words in unison, and it was pretty adorable. What’s that they say about perfect couples finishing each other’s sentences?)

She then asked him why he’s been methodically picking off members of one specific family in France, and when he tried to convince her that [1] he needs to kill all of his family’s enemies to keep Elijah safe, and [2] he’s just a product of a bad father himself, she launched into another well-deserved lecture.

“That was, like, 1,000 years ago!” she reminded him. “Really? Mean dad? Newsflash: The guy’s dead. Get over it. Stop using Mikael as an excuse to be a bad father!” This got his ears to perk up, but what really hit him were her final words: “I happen to think you’re someone worth knowing.” (Line of the night!) 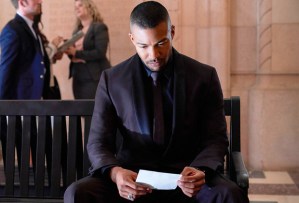 NEW YORK | Remember when Season 4 ended with Rebekah and Marcel reuniting in New York and finally getting the happily-ever-after they deserve? It turns out there’s one little wrinkle we forgot about: Happiness is an illusion and love is dead. (Oh, I guess that’ two wrinkles.) Anyway, Marcel didn’t just propose to Rebekah in Wednesday’s premiere; he played a game called “four objects and a question,” for which he gave her [1] a wedding dress, [2] a drawing of the dream house they designed together, [3] her sword [4] and a ring, before asking, “Rebekah Mikaelson, delicate as lace, elegant as a fine home, tough as polished steel and the love of all my lives — will you marry me?”

(How the hell do you reject that proposal?! If someone called me “elegant as a fine home,” I would immediately become pregnant with their child, even if I was a vampire with an inhospitable womb. It would be a damn miracle baby.)

“We are either all in, or we’re done,” Marcel eventually said after giving her a day to think things over. “The choice is yours.” Alas, Rebekah chose wrong, “I’m a coward and a hypocrite,” she eventually admitted. “I miss my family, it’s true, but I suppose I’m always running away.” (Too bad she admitted all of that to Elijah, not Marcel.) 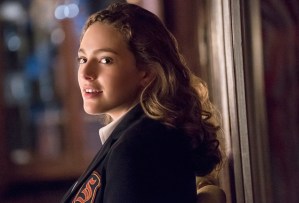 MYSTIC FALLS | While I was thrilled to revisit The Vampire Diaries’ old stomping grounds, I wish it had been under more pleasant circumstances. Not long into our trip to the Salvatore Boarding School for the Young and Gifted, we discovered that Hope is kind of a secret bad-girl at school. The kind who would sell her magical blood to a young werewolf named Henry, knowing that he intended to turn himself into a hybrid. What she didn’t know was that his plan involved jumping out of a window, which drew more attention to him and eventually got Hope suspended.

NEW ORLEANS | So it was back to the Big Easy for Klaus and Hayley’s ill-behaved offspring, where she immediately had it out with her mom. She even tried to come at Hayley with “You’re such a hypocrite! You’re the one who taught me ‘my body, my choice.’ Well, my blood, my choice!” Though a follow-up FaceTime chat with her Uncle Kol eventually calmed her down (can you believe he actually made a situation better?!), the damage was already done. Henry — now a hungry, confused hybrid — killed a vampire and brought her corpse back to the compound. Which is fine, because vampires never band together and seek revenge on this show, right? … Right?!

Your thoughts on The Originals‘ final premiere? Hopes for the rest of Season 5? Grade the episode below, then drop your full review in a comment.