In what I can only describe as American Idol‘s belated tribute to Easter, Sunday’s episode featured a wonderfully bewildering conversation about baby chickens, led by noted animal biologist Lionel Richie.

While discussing the growth of contestant Alyssa Raghu, Richie noted, “Have you ever in your life thought for a moment: You start out with a chicken — a little chicken — on Monday, and by the end of the week, it’s a full-grown chicken?”

“Was it the chicken or the egg first?” asked Katy Perry. (A logical follow-up!)

“Well, the egg comes first,” Richie replied too quickly. “No, the chicken! … Forget about that. What I’m trying to say is that when you showed up, little bird, you were absolutely so fragile.”

All that madness aside, Sunday’s episode invited the second group of Top 24 singers to take the stage and vie for the final seven spots in the Top 14 of Season 16. (Sorry for all this math, I don’t like it either.) And who better to pick these young singer’s flaws apart than country music something-or-other Bobby Bones!

Read on for a breakdown of Sunday’s best and worst performances, including the bones that Bones picked with the contestants, as well as the bones of yours truly: 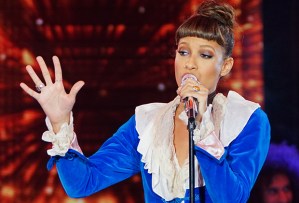 AMELIA HAMMER HARRIS
Bobby’s Bones: “You have a great style and a great look, but you have to show your personality. It needs to match that.” (Question: Why is everyone pretending like this is a unique piece of criticism? Nearly every single contestant has been told that at one point or another.)
Andy’s Bones: If Harris’ goal was to show off her personality, I’m not sure Imagine Dragons’ “Believer” was the right song for the job. Sure, I was impressed by her ability to keep up with some of the faster lyrics, but the overall performance was inconsistent — dare I say pitchy at times. And Perry basically echoed Bones’ earlier critique, once again telling Harris that she’s looking forward to seeing more from her.
Overall Hotness:

GARRETT JACOBS
Bobby’s Bones: “Everybody believes you can dance if you don’t show them you can’t.” ¯\_(ツ)_/¯
Andy’s Bones: I’ll cut Jacobs a little slack, as his voice sounded pretty strained, but no amount of eyebrow-ography could have saved that performance of Shawn Mendes’ “Treat You Better.” As for Jacobs’ moves, Lionel Richie criticized him for focusing too much on his image and not enough on the song itself — and I agree.
Overall Hotness:

(Side note: If that clip of Ryan Seacrest asking Jacobs to tackle him doesn’t end up on next week’s episode of The Joel McHale Show With Joel McHale, somebody’s sleeping at their post.)

MADDIE POPPE
Bobby’s Bones: “You have to realize that a lot of people are scared, and that’s OK. But you need to be a little more bold. You need to be a little more confident.”
Andy’s Bones: I loved everything about Poppe’s fun, refreshing take on Melanie’s iconic ’70s folk jam “Brand New Key.” It may sound like a silly song to the unfamiliar ear — looking you, Luke Bryan — but it’s deceptively difficult, and Poppe made it look effortless. I’d make room for this in my Apple Music library. (The follow-up duet with her dad? Not so much.)
Overall Hotness:

ADA VOX
Bobby’s Bones: The Idol mentor didn’t really have any tips for Ada; he seemed more interested in finding out where Adam ended and Ada began — and how expensive all that makeup is. (Ada’s answer was perfect: “It costs a lot of money to look this cheap.”)
Andy’s Bones: Nina Simone’s “Feeling Good” may be one of the most overdone songs in all of reality music television, but when it’s done this good, can you really complain? From that chilling opening riff to that spine-tingling final screech, Ms. Ada had me in the palm of her hand for the duration of her performance. Simply put, she sang for her damn life up there — so much so that Perry forgot all about that has-been Noah Davis and told Ada, “You’ve heard the expression ‘wig snatched’? Well, wig… flew.”
Overall Hotness: 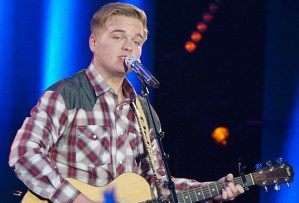 CALEB LEE HUTCHINSON
Scotty’s Bones: Rather than offering his own words of wisdom to the show’s sole remaining “country guy,” Bones set up a meeting with Hutchinson’s all-time favorite Idol winner Scotty McCreery. “It’s all about the song,” the Season 10 winner told him. “You can think about that when you’re making your song choices each week. What’s going to relate to the people at home?”
Andy’s Bones: No one cay say that Hutchinson didn’t take his Idol idol’s advice to heart, singing Thomas Rhett’s crowd-pleasing “Die a Happy Man,” which rested perfectly in his low-swinging range. Despite being technically strong, however, I struggled to find anything exciting about the performance. Richie summed him up perfectly when he described Hutchinson as being “simple and solid,” though I question whether that’s enough to succeed in this competition. (Kudos on that 70-pound weight loss, though!)
Overall Hotness:

EFFIE PASSERO
Bobby’s Bones: After hearing about Passero’s difficult relationship with her mom, Bones noted, “The hardest thing to be is vulnerable. … Vulnerable doesn’t mean just sad. You have a talent. Use that as a strength. Don’t be sorry. Use that as a weapon, because it’s the hardest weapon to get, and you have it.”
Andy’s Bones: Following Bones’ emotional advice, I was expecting Passero to serve us a ballad — but I’m so glad she didn’t. Passero owned every inch of that stage with her performance of Heart’s “Barracuda,” effortlessly screeching out notes ne’er documented in the natural world.
Overall Hotness:

ALYSSA RAGHU
Bobby’s Bones: “Sometimes, you’re not memorable on stage. … More than just dance moves, even your minor movements matter. That’s going to give you more presence.”
Andy’s Bones: I have not a negative word to say about Raghu’s rich, beautiful take on Rihanna’s “Stay.” But if we’re talking about her “minor movements,” which Perry chose to call her “fluidity,” I thought she brought a decent mix of shrugging and pointing. (“Minor movemnts” aren’t really my area of expertise.)
Overall Hotness:

MARCIO DONALDSON
Bobby’s Bones: I don’t always read too deeply into Bones’ criticisms, but I absolutely take issue with his superficial assessment of Donaldson. I understand that maintaining an active social media presence is required if you want to succeed in the music industry, but I lost it when Bones made Donaldson repeat, “I, Marcio, will do a better job of letting people into my life.” Correct me if I’m wrong, but didn’t this blessed angel of a human already take in his sister’s son and raise him as his own? One’s capacity to let people into their lives has nothing to do with how many Instagram followers they can accrue, and to suggest otherwise is kind of gross. (But also par for the course with a radio-minded mentor like Bones.)
Andy’s Bones: I would argue that Donaldson’s aversion to social media is part of what makes him such a great performer. There’s a timeless, unaffected quality to his voice, which fit like a glove into Natalie Cole’s “Inseparable.” He comes across so even-keeled in his interviews, but when he steps under that spotlight — with all those expressive looks, goosebump-inducing notes and tears(!) —  he shows the world exactly who he is.
Overall Hotness: 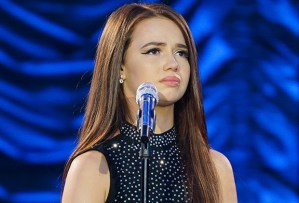 MARA JUSTINE
Bobby’s Bones: “I do love the confidence, but I think you have to limit your hair pops. If you control the passion and put it out there at specific times, it means more than if you do it the entire time.”
Andy’s Bones: I feel like I need to apologize to Justine for not making a bigger deal about her up until this point. (For the record, I blame the avalanche of Season 16 contestants with attention-grabbing backstories.) She absolutely slayed Whitney Houston’s “Run to You,” maintaining her confidence while reeling in her movements. Richie put it best — she let the crowd come to her.
Overall Hotness:

JURNEE
Bobby’s Bones: As anticipated, Bones had no pointers for this one-of-a-kind contestant. “You’re inspiring for someone like me,” he told her. “Continue that path. There are a lot of people looking to be inspired.”
Andy’s Bones: Taking that advice as far as she could without going too far, Jurnee approached the stage with a powerful cover of Jessie J’s “Flashlight.” Following Perry’s lead, the judges criticized Jurnee’s lack of stage presence, a point I have to disagree with. Prior to Perry literally telling her that she needs to connect her head and heart, I was ready to commend Jurnee on her natural ability to feel every word of her songs.
Overall Hotness:

SHANNON O’HARA
Bobby’s Bones: “If you put too much pressure on yourself, you’re not going to perform at your peak. Separate yourself from what’s happening at home.”
Andy’s Bones: I can’t say whether O’Hara enjoyed herself more or less than in previous performances, but I can say that she sang the hell out of Adele’s “All I Ask.” There was a powerful desperation in her voice, one that can only come from knowing personal struggles like the ones she’s currently experiencing. (So I’m sorry to rain on Bones’ parade once again, but I think O’Hara knows exactly what she’s doing.)
Overall Hotness:

RON BULTONGEZ
Bobby’s Bones: “You need to smile a little more. And be sad. And be angry! … A lot of people wear braces. You’ve got to let America love you a little bit.”
Andy’s Bones: Something about Bultongez’s charming interview got me very excited about this performance — and I was not disappointed. There’s some pain behind those braces, and Bultongez expressed the hell out of it. It wasn’t perfect, and I’m still not sure exactly who he is as an artist, but I’m having a lot of fun figuring it out.
Overall Hotness:

Time to weigh in: Which seven singers deserve the remaining spots in the Top 14? Vote for your favorite performance from Sunday’s episode below (you can pick up to five), then drop a comment with more of your thoughts.