For this Friday’s episode of Once Upon a Time (ABC, 8/7c), original cast member Lana Parrilla found herself behind as well as in front of the camera.

Making her directorial debut, Parrilla helped bring to life a revamped tale of Hansel and Gretel, the former of which we now know to be Hyperion Heights’ Candy Killer. Her first foray into directing also of course came in the nick of time, with just six episodes left in the fantasy drama’s run.

Here, in TVLine’s last of so many Q&As over the years with Parrilla, she details how directing played right into her personal wheelhouse, before reflecting — Kleenex alert! — on the end of her reign as Regina fka the Evil Queen.

TVLINE | I have every faith that you went into this so incredibly prepared, but even so, was there anything that surprised you about your directing debut experience?
I mean, I guess what surprised me was I had no idea how much actually goes into making a television show, or a movie, or any sort of production in our industry. I didn’t realize how many times we were going to read the script every single day, with every department, and go through every single detail of it. And I actually really enjoyed that part of it, because I am so detail oriented, and breaking stuff down on that level was a good percentage of the homework. I really, really appreciated how thorough every department was and how detailed everything was. I’d been wearing the actor’s hat for so long, I had no idea there was so much that went into it. Now having worn the director’s hat, I love it. It’s right up my alley. Prep is one of my favorite things to do, so it was really aligned with my process. 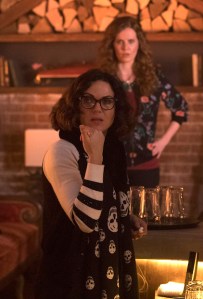 TVLINE | What’s a specific level of detail that the director gets involved in that we regular folk might not even consider?
It varies because, as they say, film is the director’s medium, TV is a producer’s medium and stage is the actor’s medium. But what really surprised me was how open my producers were to my ideas — and I came with a lot of ’em. Especially with the gingerbread house and how I wanted the children to look, ideas for Rebecca [Mader]’s look and what happens at the midpoint in the script, and the energy and vibe I was looking for. And also visually what I wanted — color schemes, etcetera, the ambiance and the feel of a place, working with the art department…. I didn’t think that I was going to have as much input, but on Once Upon a Time they trusted me with the creative process more than I thought they would, and I was really taken by that. And very grateful.

TVLINE | Were there any specific directing challenges for this episode? Any stunt work or effects-driven scenes?
Chilton Crane, who plays our Blind Witch, is an older woman, and there was a stunt that she had to perform. I was a bit concerned about her athleticism, whether this was something she had ever done before…. I envisioned the Blind Witch leaping into the air and landing in front of the Wicked Witch and holding a candy cane, threatening to stab her, and I wasn’t sure if Chilton could actually do that. I designed this whole stunt in my head and worked with the coordinator, and while there were a few little things we had to shift, at the end of the day it came together really, really well. I was very pleased, and very impressed with Chilton. She did an incredible job and really hung in there. A total trouper!

TVLINE | As we saw last week, “it’s personal” between Hansel and Zelena. Is that what these flashbacks are about?
Yes, yes. There is a history there which you will see, while we also flash forward to Hansel seeking his revenge.

TVLINE | Henry of course has been abducted. Who all gets involved in that rescue operation?
Well, there’s a few things happening there. The audience knows who the Candy Killer is, but a lot of us still don’t. Regina/Roni and Zelena/Kelly are working together to stop the Candy Killer, and then you also have the other side of it — our detectives are also on the hunt. Rebecca and I have teamed up like Lucy and Ethel. [Laughs] Or maybe we’re a little more Cagney and Lacey!

TVLINE | When I was on set, to hear Rose Reynolds say “Candy Killah” in her English accent, you almost want to meet the guy. She makes it sound adorable.
She’s such a cutie! I love the girls.

TVLINE | I saw the video (embedded above) where you gave a speech to the fans gathered in Steveston watching filming [of Storybrooke scenes], and it was so wonderful. What specifically moved you to do that?
It was my last scene in Steveston [British Columbia], and I was walking over to the green room when I saw this wall of fans. I just stood there for a minute to take it all in, and I felt so thankful and blessed that over the years we’ve had them follow us and be there to love and support us. Sometimes it can be an issue when we’re filming — sometimes we have to shift them around, etcetera — but to have a following like that is really special. I don’t know when that will happen again in my career, so I really wanted to take the time to acknowledge them and thank them. There are a lot of people who come from out of town, from all over the world, they’ve been saving all year to be there and get a glimpse of one of us…. I just thought it was really important to show my gratitude. 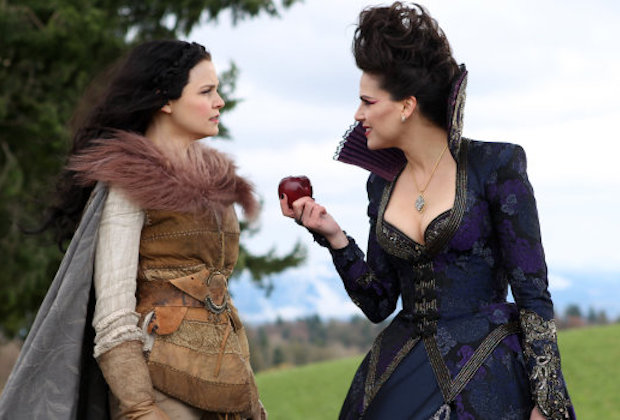 TVLINE | Regina has been such a hallmark role for you. Has there been a moment over the past couple of weeks where it really hit you that this was coming to an end?
There have been several. Several, several. In fact, there was one just a few hours ago when I called [co-showrunner] Eddy [Kitsis] at the office on the lot, and on my phone it says “Once,” so I thought, “I’m going to have to delete this number at some point!” — and it hit me again. It has come in waves, and it has been very strange, because it’s so unknown. This has been such a huge part of my life for seven years — Vancouver, the show, the character – so it feels like a big, big loss, a big shift and change. It’s going to take some time to adjust.

I’ve had moments where I was really, really, really down, super-sad and emotional about it, and really felt like, “Oh my God, what’s next? What happens after this?” And I still have moments where I feel that way, but now I’m focused on the positive, which is: How lucky are we to have a show 22 episodes, sometimes 23, run for seven years? That doesn’t happen anymore, and I’m just really grateful.

Want more scoop on OUAT, or for any other show? Email InsideLine@tvline.com and your question may be answered via Matt’s Inside Line.