This week on Marvel’s Agents of S.H.I.E.L.D., Ruby’s dream to face off against the infamous Quake came true, Mack played doctor and FitzSimmons got thrown for a(nother) time loop. 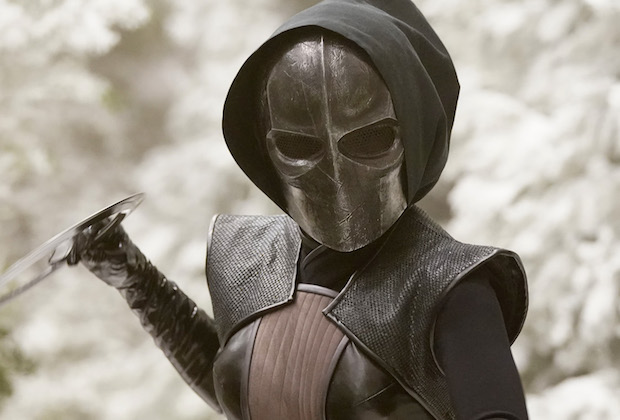 Picking up right where we left off, Coulson and Talbot started scrambling through the snowy forest, and Ruby was not far behind, having found and used the same alien communication device and then suited up for a fight. Ruby had just closed in on the gents and hurled her first Chakram when Daisy arrived on the scene to give the lass a whooping.

While May and Deke hauled Coulson and addled Talbot off to safety, Daisy slugged it out with Ruby, eventually gaining the upper hand. But just when Daisy might have taken Ruby captive, Deke arrived to offer backup, drawing machine gun fire from General Hale. Deke took a bullet, then got whisked to the Zephyr by Daisy. There, everyone clamored to get Simmons on the horn to tend to Deke, but as Mack — freshly sprung from the locked room by Piper — revealed, FitzSimmons and Yo-Yo had hoodwinked him to pursue their own agenda. That left Mack, with guidance from Piper, to perform surgery on Deke — which was rather random, but eventually led to a drugged-up Deke amusingly rambling about “pretty” Daisy and how he wants their mouths to move together and such (as long as she is OK with it).

While Daisy sat with Talbot to get a full download on what all he blabbed to Hale over the years, May pulled Coulson aside to talk about — no, not Fitz had been locked up — but the director’s own actions as of late. For one, May said that Daisy, despite her promise, was not ready to assume command. But more to the point, May took issue with Coulson’s reckless, impulsive behavior as a dying man. When he argued that he gets to decide how he wants to live his last days, May jumped in to counter that no, he doesn’t. That the people who love him get a say. “And that’s me. I love you,” May declared. “There, I thought that’d shut you up.” (And it did.)

As for FitzSimmons and Yo-Yo, their rogue mission took them to a countryside in England, which Mallick apparently had hinted was a Hydra hub. Sneaking inside a mech-guarded facility, they trio a stash of machines — including the particle infusion chamber that Hale intended to use to create the Destroyer of Worlds. (But would it be Creel? Ivanov? Ruby?) When more mechs arrived to barge in, Yo-Yo used her powers to grab their guns, but in doing so suffered inscrutable pain. The tech in her new arms can’t move that fast, Fitz realized. Still, she was their best chance to lead the charge, so Yo-Yo dashed outside to the hall, where she wound up face to face with Anton Ivanov.

While the indestructible Russian squared off against the invincible Inhuman, FitzSimmons traded gunfire with the mechs best they could, but eventually were bested. Just when they stood to die in a hail of bullets, the mech army powered down, collapsing to the floor — all because Yo-Yo had tackled Ivanov out a window, sending him to something very close to death. And his mech minions followed suit. FitzSimmons’ woes were far from over, though, because just then Ruby’s Chakram zinged between them. Ruby and Baron Von Strucker — having gone rogue on their own boss — ordered the scientists to fix the gravitonium infusion element they had smashed, or else. Fitz, appreciating that they surely had been down this road before and were destined to fix it, acquiesced.

In the bonus scene, Daisy’s sit-down with Talbot led to her sneaking him a highly scrambled SAT phone, with which he could call his son and offer an update. Talbot’s wife answered and, unbeknownst to Daisy, read from a script that had been handed to her by Hale’s minion. The scripted phrases sent Talbot into a Manchurian Candidate-like trance, ready to comply as instructed….