Another dearly departed fan favorite resurfaced in apocalypse world during Thursday’s Supernatural — and this familiar face brought on some major feelings for Dean. 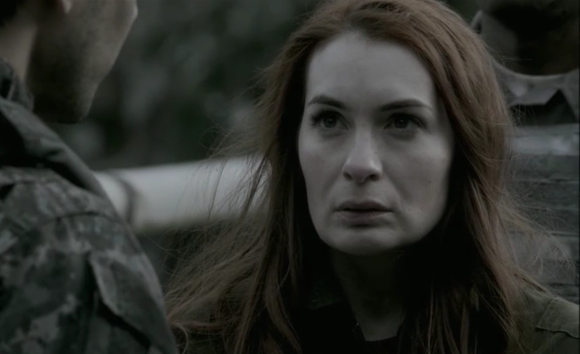 After landing over there, the hunter and Ketch spot Charlie (guest star Felicia Day), who is a member of the resistance in that reality. Dean knows that no version of Charlie would give up the location of her people — he’s right; “Bite me,” she tells Michael’s men — so he becomes focused on saving her from certain death. Ketch mistakenly assumes that Dean is fixated on the redhead because she broke his heart, but an injured Dean later reveals that she was like a sister to him.

“She did more for me and Sam than I can even say. And she was… she was butchered,” he explains. (Just in case that wasn’t emotional enough, that are painful flashbacks to her bloody demise in Season 10.)

“You feel you failed her,” Ketch says, to which Dean responds, “I know I did.” #Gutted

The former Men of Letters baddie has some regrets to wash away, too, so the two of them set off in search of Charlie. They successfully save her just as she’s about to be executed, but even after getting filled in on the multiple worlds sitch, she decides to stay behind (as does Ketch). “I don’t want to lose you again,” Dean says, but Charlie reminds him that it’s not his call. You have to believe that Dean respects her choice, because he returns home and tells Sam, “There’s a Charlie over there. She kicks ass.”

Elsewhere in the episode, after a stirring speech from Sam, Gabriel embraces his grace and kills Asmodeus, but the arch angel wants nothing to do with the fight against Michael. And without Gabriel’s grace, the boys are, well, screwed. “If we can’t open the door, then I should have never come back! Son of a bitch!” Dean exclaims, throwing everything off the table. “Every time! Every time we get close, it always falls apart. Every freaking time.”

Meanwhile, Lucifer does not take kindly to Jo’s harsh truths about how he’s too chicken to face his son’s hate, and nearly chokes her. Now he’s lost the angels and her. And all that talk about being able to make new angels? Lies.

Supernatural fans, what did you think of Charlie’s “return”? Did it help make up for how she died?