Last week’s Shadowhunters left us with a million questions, a few of which were (more or less) answered during Tuesday’s episode.

For starters, we found out more about Lilith’s backstory, as well as why she chose Jace to be her “Owl.” But I’ll let her explain that:

For thousands of years, I was unable to bear a child. Then Valentine came to me and asked for my blood for his unborn son. I knew that my boy would be far too powerful for a mere Shadowhunter to raise. So he eventually sent him to me. And I loved him with all my heart, and I never knew if he loved me back until you killed him. He called for me with his final breath. You will bring me 33 disciples so my son can be reborn, and then I will destroy you — like you destroyed him.

–
Mystery solved: Lilith is manipulating Jace as punishment for killing Jonathan, which I probably should have assumed right away. She’s even been planting those Jonathan nightmares in Jace’s head in an attempt to sever his connection with Clary, the only person powerful enough to pull Jace out of Lilith’s trance. (“You may be strong,” Jace told Lilith, “but my love for her is stronger.”) 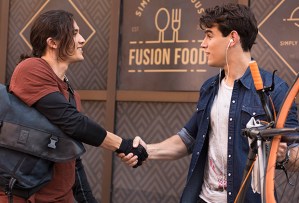 * Simon thought he randomly hit the jackpot when his new fast-healing Australian pal Kyle (played by The 100‘s Chai Hansen) told him he was looking for a roommate to fill his spacious, arcade-like apartment in Queens. Little does Simon realize that Kyle is actually a werewolf — one who wasn’t thrilled to receive a phone call from Luke. (“Let me do my job,” Kyle told him. “Simon Lewis belongs to the Praetor now.”) Yikes!

* Raphael was nearly burnt to a crisp when a vengeful Heidi knocked him out and chained him to the roof of a building. Clary and Izzy showed up just in time to save his life, but when Izzy discovered the extent of the experiments Raphael had been performing on Heidi for his own benefit, she gave him a hell of an ultimatum: “I wont report your crimes to the Clave on one condition — leave the city tonight.”

* And just as Matthew Daddario teased in our interview, there was a bit of friction between Magnus and Alec in regards to the Owl, with Alec not wanting Magnus to get too involved. For that same reason, I’m sure Alec won’t be thrilled when he finds out that Lilith showed up at Magnus’ door in the episode’s final moments — and he let her in!

Your thoughts on Tuesday’s Shadowhunters? Drop ’em in a comment below.