Cue the bell — Monday’s episode of The Voice brought to an end Season 14’s Knockout rounds. But did it suggest a frontrunner going into the Live Playoffs? Before it, the contestants had surprised us over and over again, sometimes in a positive way (for instance, Kyla Jade emerging from her shell to own Lesley Gore), sometimes not so much (Terrence Cunningham making something bad of “Tell Me Something Good”). So maybe it remained too early to start predicting who’d win — we were still learning who was going to be able to perform at a consistently high level. (That said, I’m feeling Team Alicia — not a lotta weak links in that chain.) Which of Monday’s singers stood out, for better or worse? Read on…

Team Alicia: Britton Buchanan singing “New York State of Mind” (Grade: A) defeated Dallas Caroline singing “Bless the Broken Road” (Grade: D) | Serving piano-bar realness and a vocal as rich as Bailey’s Irish cream, Britton did right by Billy Joel, turning out a performance that was so polished, you’d have sworn he’d been singing for longer than he’s been alive. Between his vocal consistency and that charm that makes me think he’d make an adorable animated character, he looks like a lock for the Top 12. Mercifully, we didn’t cut often to Dallas during Britton’s performance; the expression on her face had to have been one of “Aw, s—.” When she took to the mic, it was our turn to say, “Aw, s—.” Poor, scared kid sounded like a pitchy goat. The combination of the nerves that she’s never managed to get under control, her inexperience and that unsure vibrato did her in one last time. There’s a good singer in her somewhere, she just wasn’t able to coax that singer out on this show. 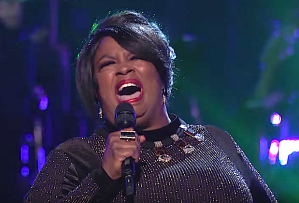 Team Kelly: D.R. King singing “(I Know) I’m Losing You” (Grade: B+) defeated Tish Haynes Keys singing “Lady Marmalade” (Grade: B-) — Tish saved by Kelly | First up, D.R. sang with screen-rattling passion — and we’re not talking here and there, we’re talking through the entire song! By the time he was finished, part of me was like, “Jeez, that was amazing!” and part of me was like, “Jeez, that was exhausting!” A little ebb and flow from him, a little nuance, might’ve been nice, but he certainly showed that he’d entered the ring capable of delivering a knockout. Mind you, there wasn’t a whole lot of subtlety to Tish’s performance, either. The big difference between them was that on stage, she was fun. She looked like she was having a blast basically telling her coach, “Oh, you think that’s a big note? Try this one.” And if a contestant shows us a good time, I’ll forgive an awful lot of technical issues (and here, there were a few). 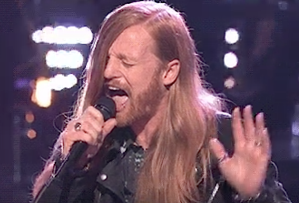 Team Blake: Wilkes singing “The Climb” (Grade: B+) defeated Dylan Hartigan singing “You Are the Best Thing” (Grade: C) — Dylan stolen by Kelly | A fact’s a fact: Dylan’s got an OK voice. I don’t get any sincerity out of it, and the gesticulations that he can’t seem to shake from his boy-band days don’t help in that regard. But nonetheless, it’s generally OK. Even in this performance, it was mostly passable. Trouble is, “mostly passable” can’t — or at least shouldn’t — take him past the Knockouts. (It did, but that’s another story.)  As for Wilkes, I like him as a rocker — between the voice and the hair, he’s just made for it. But I love the guy as a country-rocker. (Especially on Team Blake!) Wilkes’ rootsy take on Miley’s hit wasn’t flawless, and he’s definitely a contender for the Hunter Plake Mumblemouth of the Season Award. But, in particular with that never-ending last long note, he stunningly demonstrated the distinction between a dude with an OK voice and one with a helluva voice. 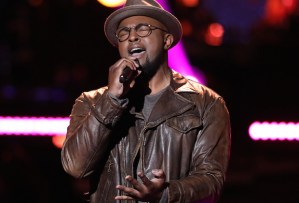 Team Adam: Rayshun LaMarr singing “Fallin’” (Grade: A+) defeated Gary Edwards singing “Many Rivers to Cross” (Grade: A) — Gary stolen by Blake | Before Gary’s performance, my impression of him was that he was a decent singer but not remotely memorable. After his performance, I didn’t think I’d forget him anytime soon. He poured into his Jimmy Cliff cover so much passion, so much guts, he didn’t ask for our attention so much as command it. He doesn’t have the biggest range in the competition, but I don’t think he hit an off note during the whole song. (And I loooved the way he let his last note dramatically kind of wilt across the finish line.) Singing second, Rayshun, OMG! He was a total wild man, eyes bugging out of his head, jumping up and down, pulling notes out of thin air. And the best part was that the madness of his performance was entirely justified: He soared to heights that were so ridiculous, Kelly declared him “ballsy as hell.” This was the Rayshun that should’ve been in this competition all along, and this is the Rayshun that I’ll be looking forward to hearing in the Playoffs. 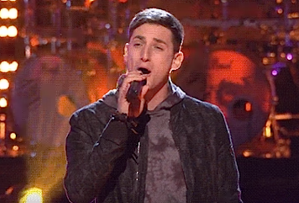 Team Kelly: Alexa Cappelli singing “Goodbye Yellow Brick Road” (Grade: C-) defeated Jorge Eduardo singing “Adorn” (Grade: D+) | As nice a kid as Alexa seems to be, I’m reluctant to like her. And I’d have thought that that was just because I was still pissed off that we lost Jaclyn Lovey and Livia Faith (both of whom I thought showed more promise and originality). But then Alexa went and murdered Elton John before our eyes — and, worse, before our ears — and I had a whole new reason to be iffy about her. Clearly, her ambition in taking on “Goodbye Yellow Brick Road” far exceeded her ability to get the classic right. Performing second, Jorge… oh, man. He crashed and burned so badly. It wasn’t Jaron Strom awful, and Jorge had a moment or two that landed, but the overall impression that he left was “train wreck.” Alexa got really lucky. 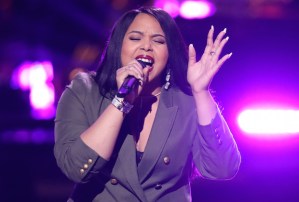 Team Alicia: Kelsea Johnson singing “Rise Up” (Grade: A+) defeated Sharane Calister singing “All I Could Do Was Cry” (Grade: A-) — Sharane stolen by Adam | Kelsea had a bit to make up for after her Battle. (You’ll recall she’d just about sung herself hoarse before getting on stage.) Luckily, the Kelsea who walked into the spotlight for her Knockout was the Kelsea that we’d initially picked as such a contender. Her voice wasn’t just powerful — and clearly well-recovered from its overuse — it was gorgeous and nimble as hell. The way it rose and dipped over the melody made me think of a paper airplane being elegantly lifted and dropped by a breeze. Plus, from head to tone, Kelsea comes off like an Artist with a capital A. Rounding out the evening, Sharane had a lot to live up to in my book, because I still remember (vividly) the flawless rendition of this oldie that Felicia Temple did in her Season 12 Blind Audition. But I have to say, Sharane freaking nailed it. While she lacks some of Felicia’s polish, she more than makes up for it with passion and just absolute firepower. Here, there was a rawness to Sharane’s performance that sounded like a freshly broken heart feels.

And, dispensed with in a montage — wait, can you have a montage of only one Knockout? — Reid Umstattdt defeated Jordyn Simone to remain on Team Adam.

So, who stood out for you Monday? And do you think past winners should be brought back every season as key advisers? Vote in the poll below, then hit the comments.