Season 3 of the dark dramedy will premiere on Sunday, June 24 at 10/9c. In the upcoming season, Jesse Custer returns home to Angelville and enlists help from his friends to move on from his past, as the fate of the world depends on it.

* Ransom‘s Season 2 premiere on CBS this Saturday night drew 2.7 million total viewers and a 0.4 rating, steady in audience while ticking up in the demo versus its freshman finale.

* BET has cancelled The Quad, about the new president (Anika Noni Rose) of a fictional Georgia university, after a two-season run, Deadline reports.

* Watch a trailer for Season 3 of Bill Nye Saves the World, premiering Friday, May 11 on Netflix:

* Watch a teaser for the Season 8 finale of AMC’s The Walking Dead, airing Sunday, April 15 at 9 pm:

* Hulu has released key art for Season 2 of The Handmaid’s Tale, whose first two episodes launch on Wednesday, April 25; click to zoom: 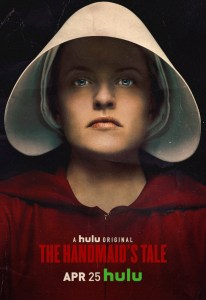