If Connor Rhodes is being cautious with his heart, who can blame him? The Chicago Med doc’s relationship with girlfriend Robin abruptly ended this season, and his flirtation with Dr. Ava Becker is complicated, to say the least.

But you can’t deny that there’s “definitely a mutual attraction” between the colleagues, star Colin Donnell tells TVLine. Although Connor and Ava have already slept together, there’s still “such a competitive spirit between the two of them when it comes to work, and an acknowledgment that maybe those two things shouldn’t be blended… There are moments of fun on both sides of the equation there as we go forward this season.”

Below, Donnell discusses a “damaged” Connor, and how he’s moving on from heartbreak. The actor also talks about his evil turn on Arrow — and his upcoming return to the CW series.

TVLINE | When Connor bought that car and started hitting on everyone after things ended with Robin, I was worried that he was having a pre-midlife crisis.
[Laughs] I don’t think that you’re too off the mark there. Essentially, what he was attempting to do was sort of tamp down whatever he was going through and not really acknowledge the fact that his life had been been turned upside down. He defaulted to, “Alright, I’m rich, I’m single, I’ve got a great job. Let’s just do that.”

TVLINE | It was a bit of a return to the cocky hot shot from early Season 1, when we first met him.
Yeah. I enjoyed getting to play that aspect of him again, and I felt like it was a nice reminder of how far he’s come by showing where he used to be. Because he’s not going to stay in that world. It’s just, I think, the default was to resort back to where he had been, and get it out of his system a little bit and move forward with his life.

TVLINE | He’s kind of moving on with Ava, but he never really got any closure with Robin. Is he really over her?
I wouldn’t say that he’s over her. One of the nice things about the way that they wrote it and the way that we played it throughout the season [is] he’s pretty damaged by that. It was a relationship that he certainly gave his all, almost to a fault. He was really committed to it. It has informed not only the way that he’s cautiously entering into other relationships, but I think he’s definitely carrying it forward with him and trying to take his time to get over it now. He was certainly just trying to rush past it before. He’s really trying to work on himself and trying to figure out what’s going on so that he can continue to grow and really focus on what’s going on at the hospital. 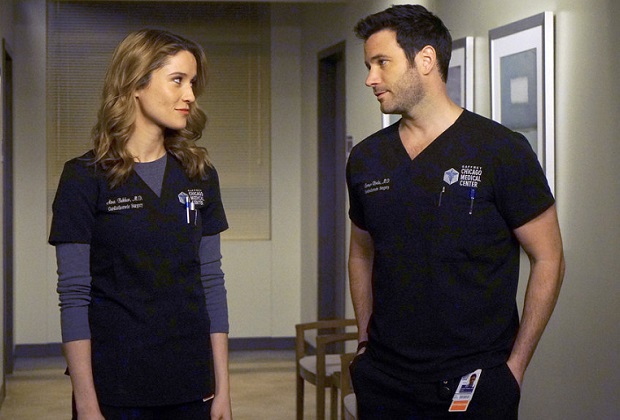 TVLINE | What do you think sets Ava and Connor apart from his past romances?
There’s the intimate working relationship, and it’s somebody that he very much sees as not only just an equal, but somebody who pushes him to be a better version of himself, professionally and… well, maybe not necessarily personally, at the moment. Without her there, Connor would be the top of the heap, and so it’s nice that he has this foil to push against and to make him push himself harder and be better. I think it’s something that maybe he didn’t even know that he needed before, but he’s very happy that she’s there for that.

Watch an exclusive sneak peek from Tuesday’s episode (NBC, 10/9c), then keep scroll down to read Donnell’s thoughts on his Arrow encore.

TVLINE | I was looking back at an interview that you and I did a couple years ago, where you said you wanted to play an evil version of Arrow‘s Tommy, and you got to do that in last year’s crossover. What was it like checking that off your list? 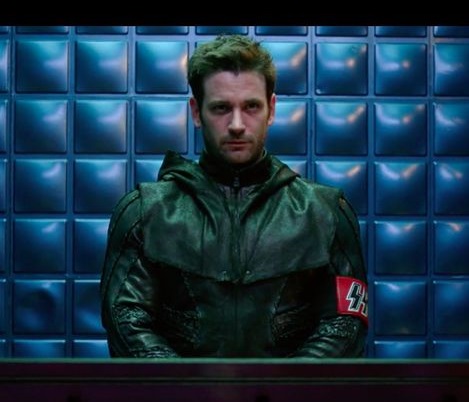 It was so fun. It’s always a pleasure to be able to go back and see everybody up in Vancouver, and to be a continued part of that show. Doing the Earth-X version of Tommy was a blast. It was fun to be a part of that giant crossover. It was so quick. I literally flew in for just one day, and then I flew out and that was it. It’s always fun to see the response from the fans, and see everybody excited about Tommy popping back up again.

TVLINE | It was just one scene, but it was so memorable and poignant.
Thank you. We had a great time. I loved being on set with Stephen [Amell]. To be able to be directed by James Bamford… when we started the show, he was the fight coordinator, and now he’s a producer and a director, and it’s just awesome. I’m so happy for those guys. And they just got picked for a Season 7, which is all the more cool.

TVLINE | Stephen tweeted a photo recently that hinted that you might be returning to Arrow again.
Yes, he did. And yes, I will be. And that’s pretty much all I can say about it. [Laughs]

TVLINE | It must be so nice that so many years after they killed off your character, they’re still finding ways to bring you back.
Yeah. To be a part of that show and to have fans follow me over to Chicago Med, it means the world to me. I love both of the characters, and to have Tommy continue to be a factor while at the same time Connor is becoming what I’m more known for, I love it. I’m part of two big universes, and it’s amazing… to have taken the fandom from the Arrowverse and bring them over to Dick Wolf’s One Chicago. It’s a real joy, and I couldn’t be happier about where I am.