Monday’s American Idol paired the first wave of Season 16’s Top 24 with some of the biggest names in music — before thinning the herd with five dream-crushing eliminations.

Before we break down all 12 of tonight’s duets, here are the five singers booted from the competition this evening:
* Trevor McBane
* Layla Spring
* Dominique
* Brandon Diaz
* Kay Kay

That means Cade Foehner, Michelle Sussett, Dennis Lorenzo, Gabby Barrett, Jonny Brenns, Michael J. Woodard and Catie Turner (phew!) are moving forward. Honestly, I have no complaints with these results. Like, I wish I had more to say, but I genuinely believe the best collection of humans remain.

As for tonight’s performances… 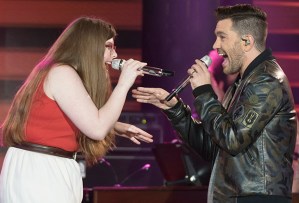 CATIE TURNER
Partnered With: Andy Grammer (“Good to Be Alive”)
Thoughts: Sure, Turner was a little aggressive with Grammer — I’m pretty sure she cracked a few of his ribs with that hug — but she was excited and confident, both things worth celebrating. And that enthusiastic vibe carried through to her performance, a harmonious collaboration that built to a stunning bridge before wrapping high and tight. The judges showered Turner with praise, but my favorite note came from Lionel Richie, who told her, “You’re doing things you’re not supposed to know yet.” This girl is beyond her years.
Overall Hotness:

CADE FOEHNER
Partnered With: Bishop Briggs (“Never Tear Us Apart”)
Thoughts: Like most of America, Briggs was instantly lost in Foehner’s sparkly green eyes and Mufasa-esque mane. But she soon learned that he was more than just a pretty, hairy face when he started mentoring her on the song. Foehner and Briggs’ growly voices complemented each other nicely, while simultaneously challenging the other to keep up. Were this a Voice battle, I would have given it to Foehner — and I feel like Luke Bryan was only half kidding when he invited Foehner to join him on tour.
Overall Hotness:

LAYLA SPRING
Partnered With: Sugarland (“Stuck Like Glue”)
Thoughts: First of all, I’ve never felt older than when Spring said she’s been listening to this song for her “entire life.” I’ve also never been more excited to hear this song performed live. It would have been too easy for Jennifer Nettles to dwarf the 16-year-old contestant — both in height and talent — but Spring managed to hold her own against the Grammy Award-winning powerhouse. That said, I kind of wish Spring would stop being so surprised (“Oh my gosh!!!”) every time the judges pay her a compliment. Own your power!
Overall Hotness:

DOMINIQUE
Partnered With: Aloe Blacc (“Wake Me Up”)
Thoughts: Watching this performance, I honestly didn’t know where Blacc ended and where Dominique began, the combination worked that seamlessly. Both pro and amateur alike were given chances to shine, and Dominique definitely took advantage of his solo moments, putting his own spin on the hit song. The judges were right, Dominique is a “world-class” contestant.
Overall Hotness: 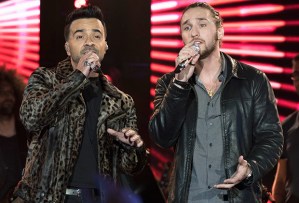 BRANDON DIAZ
Partnered With: Luis Fonsi (“Despacito”)
Thoughts: Less than 24 hours after butchering Richie’s “Hello,” Idol gave Diaz the opportunity to destroy another beloved radio jam. But because Idol loves a good plot twist, Diaz redeemed himself with tonight’s performance, keeping up with Fonsi better than Justin Bieber ever could. (And before you doubt me, please watch this video.)
Overall Hotness:

KAY KAY
Partnered With: Train’s Pat Monahan (“Drive By”)
Thoughts: Look, I love a good car commercial theme song as much as the next guy, but this was not a good choice for poor Kay Kay. I was worried when the rehearsal footage revealed her nerves were getting the best of her, and none of that anxiety went away when she took the stage. She did a decent job with the material she was given, but it was a pretty underwhelming performance overall.
Overall Hotness:

TREVOR MCBANE
Partnered With: Bishop Briggs (“River”)
Thoughts: Briggs and McBane’s voices matched even more perfectly than their outfits during this booming performance. She also pulled him out of his shell, giving us a slightly better idea of what he’s all about.
Overall Hotness:

MICHELLE SUSSETT
Partnered With: Luis Fonsi (“I Can’t Make You Love Me”)
Thoughts: I knew we were in for something special when we first saw Fonsi and Sussett bonding during rehearsal, but I was not prepared for the sultry feast the duo served directly to my ears. I didn’t even know Sussett had this side to her. When her voice dipped, I dipped, we dipped.
Overall Hotness:

JONNY BRENNS
Partnered With: Andy Grammer (“Back Home”)
Thoughts: Of all the pairings on tonight’s episode, this was probably the most obvious. Like, Brenns could open for Grammer on tour tomorrow. That said, it wasn’t my favorite performance, if only for its lack of excitement (which is weird, considering it was the most upbeat song Brenns has done yet). And I’m with Ryan Seacrest — if Brenns decides to take ballet lessons, there had better be cameras!
Overall Hotness: 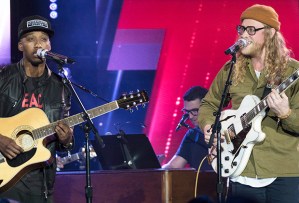 DENNIS LORENZO
Partnered With: Allen Stone (“Unaware”)
Thoughts: Stone was the only pro to admit that he was “nervous” to sing opposite a contestant, likening Lorenzo’s vocal chords to a flock of doves. Running with that analogy, their voices blended beautifully and migrated us all straight to heaven. Like, I’m not saying I’m pregnant after that performance, but I’m definitely more fertile because of it.
Overall Hotness:

MICHAEL J. WOODARD
Partnered With: Train’s Pat Monahan (“Angel in Blue Jeans”)
Thoughts: Was this an oddly romantic choice for a duet? Sure, Monahan admitted as much during rehearsals. But was it also the perfect vehicle for Woodard’s versatile vocals? Oh, hell yes.
Overall Hotness:

GABBY BARRETT
Partnered With: Sugarland (“Stay”)
Thoughts: I had high hopes for this performance after watching Barrett and Nettles in rehearsal — honestly, it looked like one woman duetting with a younger version of herself — and my expectations were more than met come showtime. Barrett exhibited such an incredible command of her own voice, effortlessly standing tall against Nettles. Chills.
Overall Hotness:

Vote for your favorite performances below (you can pick up to five), then drop a comment with your thoughts on tonight’s eliminations.