This week on NBC’s Timeless, Wyatt’s reunion with his dead wife did not go as he imagined, while Lucy and Rufus begrudgingly teamed with Flynn to keep Rittenhouse from conjuring trouble in colonial Salem.

Picking up exactly where last episode left off, Wyatt apparently got a text from Jessica, who is no longer dead but very alive (and busy, pulling doubles at a watering hole). And despite Wyatt’s warm embrace, he only gets a big chill in return — seeing as he apparently has been AWOL for two months (and checked out of their marriage for far longer).

Back at the bunker, Lucy is looking around for Wyatt when he calls with the happy (?) news, about Jessica. We can see that Lucy is very much “Really?!” on her end, but over the phone she puts up a good-ish front, knowing how badly Wyatt had longed to undo Jess’ death.

Wyatt pleads with Jess to make things right between them — “I’m a changed man” and all that — but apparently she has seen this movie wayyyy too many times, being married to “a state secret.” That leaves Wyatt with no play other than to sneak her into the bunker (much to Agent Christopher’s dismay), where Jess’ skepticism over what he is about to explain to her is interrupted by her star-struckness over meeting Connor Mason. Almost all of Jessica’s remaining doubt is eliminated when she witness’ the Lifeboat’s appearance upon its return from Salem. Cue Lucy’s (awkward!) emergence from the vessel, with Flynn at her side.

In private, Wyatt details for an enlightened Jessica how she was murdered years ago, in his “reality.” As such, he is literally not the same guy she has been unhappily married to all this time. Can she give him one last chance? 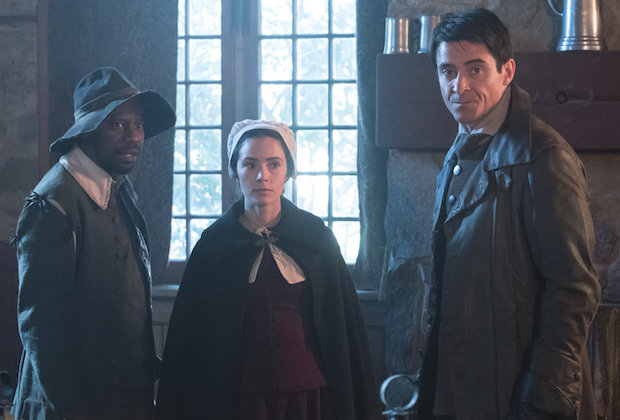 As for said Lifeboat mission: Lucy, Rufus and Flynn (filling in as the “soldier” of the team) traveled to Salem, where they saw that the eight “witches” fated to be hanged (not burned at the stake) that day oddly totaled nine — with the addition of Abby Franklin, the woman who will one day give birth to Benjamin Franklin. (No Ben, no sense of freedom to speak out against those in power, yes tyranny! Gosh, imagine?) Despite much snooping, the team can’t find the Rittenhouse sleeper agent, and that’s because it was the handiwork of Lucy’s mother that put Abby in line for the gallows. Finally getting his mitts on a musket, Flynn is able to interrupt the hangings, thus sparing Abby’s (as well as Lucy’s!) life and turning History’s “Salem Witch Trials” into the “Salem Witch Revolt.”

* Prior to the mission, Jiya shared with Rufus that she has been having premonitions — specifically, of his future. Rufus’ reaction was, frankly, a bit rude. But once in Salem, he saw her vision of him aiming a musket at a scarred man come true. Rufus refused to gun the man down, though he died anyway (in the colonial version of what we call a George O’Malleying). Once back home, Rufus suggested that Jiya no longer share her visions, since they influence his actions and not necessarily for the better.

* Nicholas Keynes immersed himself in exercise bikes, bad music, drive-thru tacos and the like, while directly ordering Carol to “take care of” her daughter/his great-granddaughter. (Cold!) When Carol returns from Salem to report that Flynn derailed her plan, Nicholas puts an all-too-enthusiastic Emma in charge of snuffing Lucy.

What did you think of “The Salem Witch Hunt”?