Sides were changed so often during the penultimate Season 8 episode of The Walking Dead that it was a wonder the damn war wasn’t finally ended simply because the survivors fighting it couldn’t keep track of who was on whose team anymore. One character even wound up doing the opposition a solid — accidentally. Who became an MVP, and how’d they manage to do so without realizing it? Read on…

‘START EVERYTHING OVER’ | “Worth” began with Rick alternately gazing at Michonne and Judith, and reading Carl’s letter, its contents revealed to us through a lovely, bittersweet Chandler Riggs voiceover. Among the late teen’s fond memories of better days, full of pizza Fridays and kiddie pools, was a recollection of walks with his dad. Carl had been just 3 years old at the time, yet he could nonetheless remember “how I felt holding your hand,” he wrote. “I felt happy and special… I felt safe.” And he wished he could give that feeling to his dad — and to all the survivors, really. So, since he couldn’t imagine the Saviors surrendering, he hoped that Rick would make peace with Negan and “give them a way out.” If he did, there would be a chance for “that bigger world Jesus talked about” to keep changing until it was “everyone giving everyone the opportunity to have a life, a real life.” (Well, except for the guys that Rick and Morgan slaughtered in “Still Gotta Mean Something”; we’ll just consider them grandfathered out, as it were?) Oh, and one more thing, Carl added before signing off: “Go on those walks with Judith,” he wrote. “She’ll remember them.” Shortly thereafter, Michonne stole into the Barrington House bedroom that she shares with Rick and retrieved from a drawer Carl’s letter to Negan, who I could only imagine reading it while casting a besotted glance at Lucille. 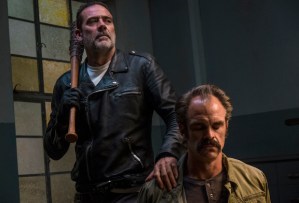 Speaking of Negan, since no one at the Sanctuary was any the wiser about his “resurrection,” Gregory enthusiastically blew smoke up Simon’s ass in hopes of getting in the good graces of the new Negan. When his symphony of sycophancy didn’t do the trick, the Hilltop’s deposed leader refused to be tossed out. “I’ve suffered too much for it to end like this!” he cried in what might have been the first indication we’ve ever had that he has testicles. “I have been reborn as a certified s—kicker!” Of course, he was really just the same s— he’d always been, and when offered the chance to be Simon’s coffee-making guy Friday, he eagerly took it. Later, Negan revealed himself to first Dwight, then Simon, who promised to make it up to el jefe for veering from his plan for the Hilltop. “I’m gonna need you on your knees,” Negan replied. But it turned out Simon didn’t have a date with Lucille just yet — it was only a mind game. “All is forgiven,” Negan said. “Get your ass up.” They had work to do — starting with his new plot to establish sniper posts all around the Hilltop, thereby trapping the community’s denizens. 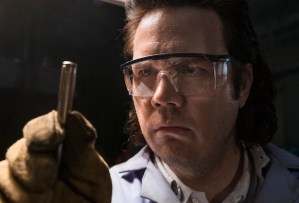 ‘YOU TURNED YOUR BACK ON THE ONLY FRIENDS YOU EVER HAD’ | At the ammo factory, although Eugene mainly appeared to be auditioning for another Horrible Bosses sequel, he did manage to pay enough attention to the task at hand to catch Gabriel sabotaging bullets. In tears, the preacher admitted that he was as reluctant to help the Saviors as he was afraid of dying. Perhaps, he sobbed, this ordeal was God’s way of showing him that he hadn’t changed at all from the coward who’d once reduced his parishioners to Walker Chow by locking them out of their own church. Whatever, Eugene pretty much said, putting Gabriel in time-out with an instruction to “try not to cry too loud.” Off that display of managerial expertise, Eugene headed outside to test a few rounds… and was immediately apprehended by Daryl and Rosita. En route to the Alexandrians’ getaway car, ol’ mullethead speculated that they hadn’t killed him because they still harbored some nostalgic feelings for their former friend. Right on cue, Daryl angrily threatened to cut out Eugene’s tongue, and Rosita, pointing a pistol at his chins, suggested that pulling the trigger would make the world a better place. The only reason he continued to have a pulse, she hissed, was because they were gonna make some use of his pathetic life. Sensing that a group hug was not forthcoming, Eugene waited until Daryl and Rosita were half distracted by some approaching walkers, then made himself upchuck sardine mac and cheese on Rosita, and fled. And sure, it was clever of him to hide in the ashes of what had obviously been a massive walker barbecue. But I mean, come on. How embarrassing must it have been for Daryl and Rosita to realize they’d let Eugene — Eugene — get away? 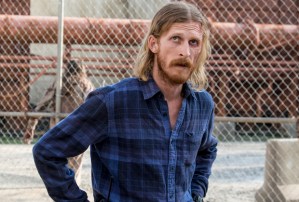 Back at the Sanctuary, Simon interrupted Dwight as he was copying Negan’s map of planned sniper posts to inform him that the first meeting of the Replace Negan Club would take place in the courtyard after rounds. And what a meeting it was, too. Joined by Gregory and some likeminded Saviors, Simon invited Dwight, with his personal reasons for wanting Negan dead, to be the assassin. Once that bit of business was taken care of, they’d turn the Hilltop into “a monument of compliance.” Just then, Dwight whistled the infamous Negan whistle, and out came the Big Bad himself. Quick as you — or, rather, he — could say, “Three, two, one,” snipers had taken out all of the traitors but Gregory and Simon, who wanted to know why. Why on earth had Dwight ratted him out? Because, scarface replied, Negan would win. Though the boss admitted that he was aware that Simon had taken out the trash people, he was still willing to give his treacherous lieutenant a shot at his job. But “you wanna be the man,” he said, “you gotta beat the man.” Which meant that they were heading inside to draw a crowd and engage in a brutal fight. Simon struck first — a sucker punch — but Negan soon had the upper fist. Before Negan crushed Simon’s throat, Dwight passed to Gregory his map and instructions for Rick, and warned the (ahem) “certified s—kicker” that delivering the intel was his only play. 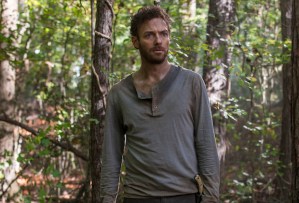 ‘YOU THINK YOU’RE SOME SORT OF A HERO?’ | While all this was going on, Aaron was apparently hanging out near Oceanside in hopes that his continued proximity would somehow sway Cyndie & Co. into joining the fight against the Saviors. At first, it seemed completely pointless. Rachel didn’t even say “We should just kill him” with her usual bloodlust. (She said it, of course — that’s all she ever says — she just didn’t say it with that familiar, murderous gleam in her eye.) However, after Aaron got rained on, lost his knife in a puddle, dispatched some walkers using only blunt force trauma and a stick, and passed out, the Oceansiders came around. That is, they came around to where he was lying in the woods. When he awakened, he speechified that Enid wasn’t to blame for Natania’s death, the Saviors were, and they’d keep on turning the Oceansiders into fearful people hidden away from the world unless they did one thing: “Fight.” And scene. He collapsed in his puddle again. Having made it to the Hilltop, Gregory was back where he belonged — in the prisoners’ pen — after delivering Dwight’s intel to “Margaret.” Question was, what were she and Rick going to do about that intel? At the Sanctuary, as Negan walked Dwight back to his room, he offered scarface Simon’s suddenly vacant position, and he not only accepted, he promised to help finish the war with Rick. “You already have,” Negan declared. When Dwight opened his door, he discovered waiting for him — we guessed it — Laura, who’d been only too eager to expose him as a “scum weasel.” As for Negan’s brilliant plan to trap the Hilltoppers… it was, in his own humble opinion, a “brilliant fake-ass plan.” Dwight’s map was actually going to lead the AHK alliance right into the line of fire. And what of Dwight? How would he be punished? It wasn’t spelled out for us, but Negan did hint that it was a less dignified fate than merely being killed. 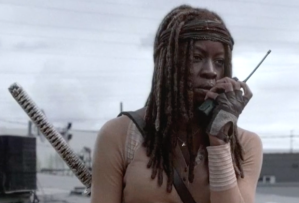 Once Eugene had made ashen tracks all the way back to the ammo factory, he learned that Negan needed his bullet order the following morning. No problem, said the brainiac, who immediately told Gabriel to get back to work — with no funny business this time. Or, if the preacher preferred, “you can cry and die.” Clearly still mad about the chilly reception he’d gotten from the friends he’d backstabbed, Eugene tried to rally the troops by saying that they were about to “change Savior history evermore.” So get to it. “Time to do something useful with our pathetic lives.” As the episode drew to a close, Negan was watching from afar as a zombified Simon became the new walker on the Sanctuary’s fence when Michonne called over the walkie-talkie. “This isn’t about Rick, it’s about Carl,” she said, adding that she intended to deliver his letter because that was what he wanted. “I can’t promise not to kill the messenger,” Negan replied. So yeah, best she just deliver the letter aloud via walkie-talkie. The missive’s contents? Carl wrote that he believed Negan thought he had to be who he was… but was that what he wanted? There was a way out, Carl continued. It’s “working together. It’s forgiveness. It’s believing that it doesn’t have to be a fight anymore, because it doesn’t.” In closing, Carl invited Negan to “start over… You still can.” Unfortunately, he “wouldn’t accept your surrender if you came to me on your knees,” he told Michonne. “Winning is about killing every last one of you. That is starting over.” And to emphasize that their conversation had come to an end, he smashed his walkie-talkie. (Which, frankly, seemed shortsighted as well as rude.)

So, what did you think of “Worth”? Were you satisfied with Simon’s swan song? What do you suspect Negan has in store for Dwight? And do you believe and/or hope Negan will get whacked in the finale?