This week on Marvel’s Agents of S.H.I.E.L.D., Coulson worked with unlikely allies, Daisy found a wounded bird and Yo-Yo pulled a whopper on big Mack. 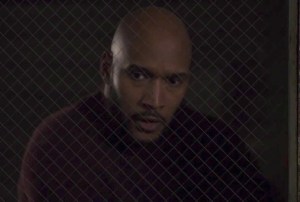 First things first: As the headline suggests, I am not OK with how and why Elena and Jemma pulled a fast (and rather dark) one on Mack, in the name of freeing Fitz. It was wrong, it was icky and it involved the betrayal of an otherwise very good man — perhaps the best man S.H.I.E.L.D. currently employs. Presumably (almost) all will be forgiven once the ladies and Fitz return from their own mission to find Coulson and thwart Hale, but two wrongs don’t make a right. This was borderline Arrow/OTA vs. NTA infighting. (Yes, I said it.)

As for what else went down this week: now in possession of alllll the gravitonium, Hale had Carl “test” it out by touching it, presumably to infuse his own cells, and all while Ruby looked on, fretting that she would be replaced as Destroyer of Worlds. As it turned out, Carl’s encounter with the gravitonium was an excruciating one, as the oscillating goo attempted to infuse him, and at the very least left him with intermittent, haunting flashes of when Dr. Franklin Hall involuntarily merged with the goo in Season 1, Episode 3. 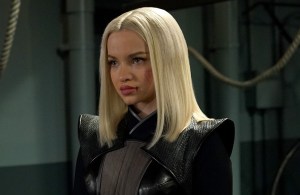 Carl later paid a visit to Coulson’s cell, where he learned that General Talbot was not being “treated” by Hale but being tortured. After beheading the mech guarding Coulson’s room, Carl and Coulson ventured to a remote corner of the compound, in search of Talbot. Once they found the addled general, the three made tracks for the nearest exit only to bump into suited-up, Chakram-wielding Ruby. Carl slugged it out with the lethal lass (in an excellent sequence of fight choreography/seamless doubling), while Coulson and Talbot wound up on the room with the Chitauri device, which Coulson activated to transport them to… a snowy somewhere.

Elsewhere, Daisy had the Zephyr swing by to pick up Robin and her mother, only to learn the young seer has not scribbled a single thing since… drawing a picture of her own death, as an old woman, in May’s arms. Upon hearing Robin call May “Mom,” the tyke’s actual mother confirmed that she is fated to die (as you know, we all are). After being comforted by May, Robin managed to crank out some fresh art — of two men (Coulson and a bedraggled Talbot) standing in the snow, with three mountain peaks in the distance.

Back at the Lighthouse is where the aforementioned betrayal played out, with Yo-Yo and Jemma anxious to free Fitz, so that he might track down the Hydra tech that Hale needs to make her weapon. Daisy (whom Deke twice noted has become a “hard-ass” ever since being put in charge) had  in turn left Mack in charge in her absence, and he refused to hear the ladies out. They therefore staged a “demonstration” of Jemma’s invincibility that led to her “accidental” “poisoning,” forcing Mack to spring Fitz — at which instant Yo-Yo shoved her beau into the locked room. Again — so not cool.

Anyway… this week’s tag took us back to a “lost” scene from the Season 1 finale. Previously, Raina had secured John Garrett’s OK to turn the gravitonium glob over to industrialist/scientist Ian Quinn, which they then transported away in the back of a van. In this new continuation, we see Ian express his gratitude for being given the gravitonium — except, Raina announces, he is mistaken. No, the Dr. Hall-infused goo asked for him. At which point she unlocks the crate, allowing the metallic goo to attack and consume Ian.

What did you think of the episode “Inside Voices?