“It’s not as good a response as Chrissy Teigen’s,” Dulude says, still chuckling as he notes that, hey,  any buzz about the role he and his team of 15 artists played in the live musical is welcome.

“It’s always nice, because a lot of times, makeup doesn’t — unless it’s really over the top — always get noticed,” he says. “And some people don’t notice the skill that it can take, because if it looks really good, people just think it’s natural.”

Get ready for some tattoo madness tonight at JCS. I am so excited for this and so grateful for the opportunity to design this show. It has been an amazing experience with an incredible team who has gone above and beyond my expectations. Watch Jesus Christ Superstar Live tonight on NBC at 8pm EST and look for my name in the credits. It's an epic show! #jesuschristsuperstarlivenbc #jcs #jcslive #makeupdesigner #tattoodesign #sacredgeometrytattoo #makeupartist #prestofx #joedulude2 #joe2thisisyourlife

Dulude is a busy guy — one of his next big projects is the upcoming revival of Broadway’s Torch Song Trilogy — so while we had him on the phone, of course we wanted to know more about the disciples’ distinctive body art. Read on for his thoughts about:

THE ORIGIN OF THE INK | Dulude collaborated with Superstar costume designer Paul Tazewell on the tattoos’ overall look; in all, there were about 25 different designs. “He sent me one image of someone who had a solid armband, and he had a line that was coming down from it. That just pushed me right into the right direction, where I started thinking about sacred geometry and the spirituality of what the piece is about,” the makeup designer says. “Everything was shapes: rectangles or triangles or circles or lines combined into these designs.” The images were made into temporary tattoos applied to the actors before the show. “Lots of things were done in threes to represent the holy trinity,” he adds. “There’s one that’s sort of a modern interpretation of stained glass.” 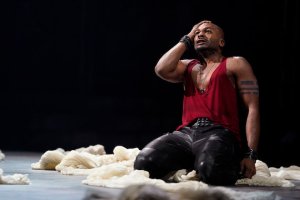 THE BETRAYER’S BIG PIECE | “Judas’ was the most complex out of them, because I feel like he is the most complex character in it,” says Dulude, acknowledging that his Catholic upbringing served him well during the project. The central piece emblazoned on Brandon Victor Dixon’s chest is a contemporary take on the Sacred Heart of Jesus — three concentric circles with a separation that signifies the four ventricles, and lines to represent swords — “but the design itself, the lines were very thin. We didn’t want it to be overwhelming, where all you were looking at was the enormous tattoo… It had to have more of a delicate air to it, so it’s a little bit more of him,” he adds. Dulude also studied ancient scripts and used them as inspiration to create his own, which makes up the flames above the heart. “After I looked at the chest piece, I felt like his arms looked a little bare and weird, so that’s why we put the arm bands on him, as well.” 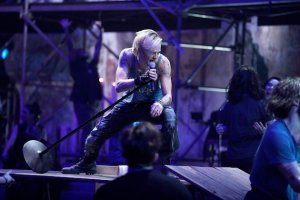 HEAD AND SHOULDERS ABOVE | Erik Grönwall, who played Simon Zealotes, wore Dulude’s favorite design: a sprawling tattoo that started on his mohawked head and spilled down onto his shoulders and arm. “It was like the arches of a church,” says Dulude. “There’s a really fine beauty to it.” Apparently, Grönwall was an instant fan. “Erik, he was all for it,” Dulude recalls. “When we did his tattoo test, he just wore it for days. He never took it off. He was so excited. He was like, ‘I may think about getting this!'”

ONE OF THESE THINGS IS NOT LIKE THE OTHER | Sara Bareilles’ Mary Magdalene was ink-free by design, Dulude explains. “It was a definite point to make her not be like other people, that there was something special about her.”

THE RIGHT TO BARE ARMS | Cast members who already sported their own body art and planned to show it during the telecast “had to get releases from their tattoo artists,” he says. Those who didn’t or couldn’t had their tattoos covered with some of Dulude’s larger creations, such as solid black circles. 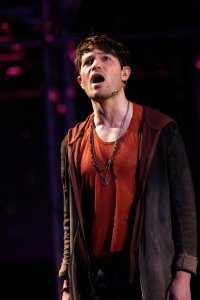 TEAM WORK MAKES THE CREAM EYESHADOW WORK | Dulude says he’s very thankful to his “incredible” staff of 15 makeup artists on the musical. “They made my job and my life so easy because they used their artistry and skills and brought my vision to life.”

GOTTA HAVE GUYLINER | Some of Superstar‘s male cast members sported eyeliner, some didn’t. The decision about who to glam up “was really about what their whole look was,” he says. “Some wanted a little bit more, and I’m OK with that… It was heavier earlier on [in rehearsals], but we decided to go a little bit lighter with them.” In fact, the high priests — Norm Lewis, Jin Ha & Co. — originally had a much more dramatic eye game going on. “We had done a really geometric eyeliner on the high priests, where it was really squared off,” Dulude reveals. “They did look ominous with it on, but David [Leveaux, the director] didn’t really like it, so we got rid of it.”