“Will Arrow dive deeper into why Diggle wants to be the Green Arrow?”

That question, emailed to TVLine’s Inside Line column by a reader named Stephanie, will be answered in a big way in this Thursday’s episode (airing 9/8c on The CW). “We’ll learn way more,” avows David Ramsey, who since Day 1 has played Oliver’s No. 1. “It goes deep.”

Elaborating on what drives Diggle, Ramsey says, “It’s much more complicated, clearly, than him wanting to be Green Arrow. What Stephanie has seen so far has just been me wanting the mantle, when in reality, it goes far deeper than that, and we’ll get into that. We explore specifically what the Green Arrow mantle means to Diggle.”

Alas, that deep dive will be born of Oliver (played by Stephen Amell) — in the wake of Thea advising him not to no longer “string John along” — making clear his intention to keep donning the hood, much to the dismay of his partner, who happily filled in a short while ago.

“What John sees is that there’s more than one way to save the city,” Ramsey explains of his character’s POV. “Arguably, people have died both close to us, i.e. Laurel Lance, and in our city from the invention of the Arrow, the Hood character. And it’s not a forgone conclusion that these people would not have died had Oliver Queen listened to different varying points of view as to how to fight the Damian Darhks and the Ra’s al Ghuls of the world. Diggle feels like perhaps if some things were listened to, we could’ve spared ourselves some pain.”

To date, Ramsey notes, Diggle has “always gone along — even, in his own words, against his better judgement — because he trusted and loved Oliver, and still does. But I think he really does see now that there’s a different way of doing this. At the end of the day, Oliver Queen is our Bruce Wayne character. He’s a loner of sorts, and though he’s grown past that with Felicity and with Diggle, John sees that [Oliver] is a guy who makes his own decisions, and he’s not quite sure where he fits in that.” 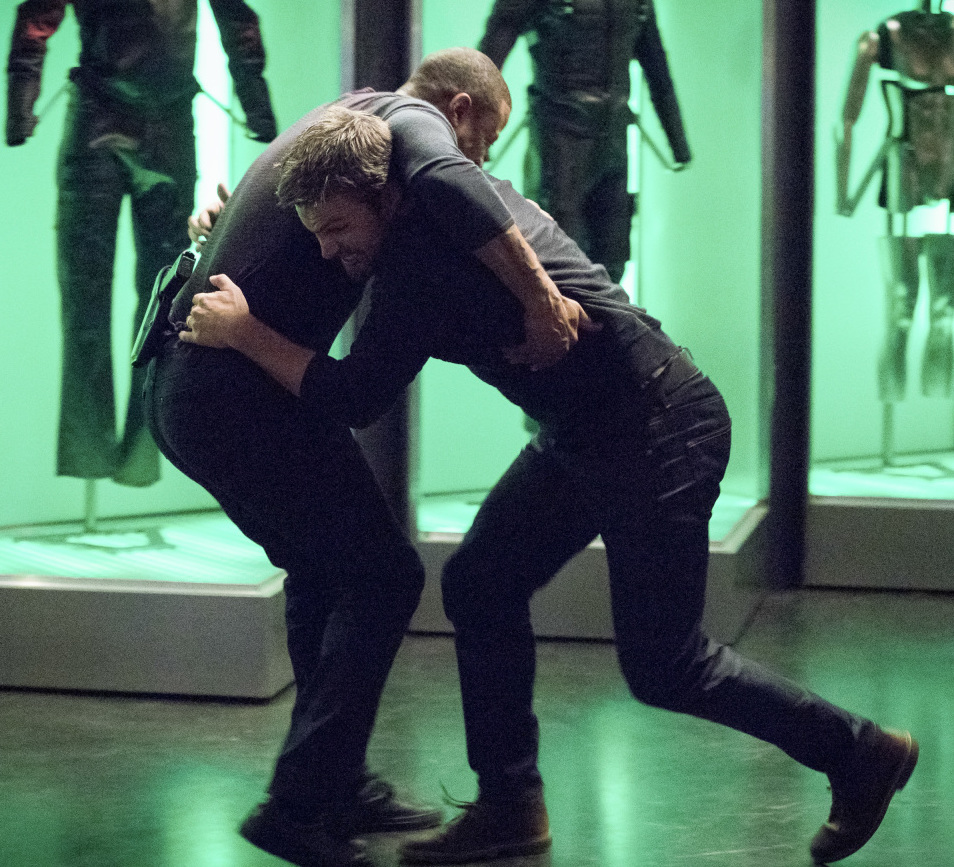 That uncertainty, especially as Oliver alerts John to the fact that he is holding onto the Green Arrow mantle, fuels this week’s angry war of words (and more).

“This is a long time boiling up,” Ramsey says of the donneybrook between “two alpha males,” as he aptly puts it. “They’re brothers, right? And brothers have fights. But this feels a bit different.” Green Arrow’s vigilantism “is no longer just Oliver’s crusade. It is also Felicity’s, it is also John Diggle’s, and it’s also the lives and the families of everyone else on the team, so Diggle is speaking not just for himself but for a lot of other people,” Ramsey adds. As such, what the men share Thursday night is “a well-constructed argument of ideologies, and it goes very deep, and it goes beyond words. It’s not just words.”

Oliver, though, feels as if Dig’s “words” take one dig too many — or worse, are off-target — which only amplifies the intensity of the encounter.

“We have a very good argument,” says Stephen Amell, “and it’s a wonderful scene, and David’s wonderful in it. But if you’re the fact checker when that scene’s happening, I think that everything that Oliver is saying is rooted in absolute truth, while a lot of the stuff that Diggle is saying feels like he’s ‘reaching’ a bit, because he’s upset about something else. So I’m interested to see how it all pays off.”