I’m gonna need a minute, and I doubt I’m the only one. Before we get to dissecting and debating Tuesday’s Knockouts on The Voice, I’ve got to shake my shock and disappointment over Jaclyn Lovey’s elimination Monday (and the so-not-her performance that led up to it). Off reader Logan’s comment, I even went back and rewatched her KO to see if it had really been as bad as I thought. At best, it was a C- instead of a D. Those just weren’t sounds that I expected — or wanted — to hear come out of Jaclyn’s mouth. Unless the new coaches’ Saves have replaced the second chance that being a Comeback Artist usually affords, maybe she’ll still redeem herself that way. (I hope Livia Faith will get another shot via the Comebacks, too. Molly Stevens probably blew that potential opportunity by blasting coach Kelly on-line.) Now then, on to Night 2 and the faint hope that Season 14’s biggest heartbreak was behind us… 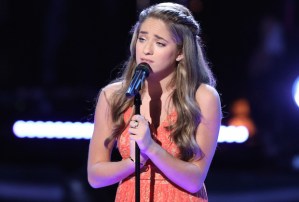 Team Kelly: Brynn Cartelli singing “Here Comes Goodbye” (Grade: B+) defeated Jamella singing “Girl Crush” (Grade: C) | Suddenly, I feel like one of the coaches — you know how they tell pretty much every contestant, “You could win The Voice”? But after this performance of Brynn’s, I thought, “Wow — she really could win.” Apparently having learned nothing from Addison Agen’s preternatural polish, I expected Brynn’s youth to trip her up, in nerves or inexperience or… something. Yet so far, the kid hasn’t really faltered. Her Rascal Flatts cover wasn’t perfect, but it showed off not only her enviable lower register but also the emotional openness that makes her vocals feel real as well as sound beautiful. Strategically shrewd, too, dipping a toe into country. (Eat your heart out, Blake!) Jamella went country as well, but since she’d always been montaged before, did any of us remember her well enough to know that that was a departure from what she’d like to make her signature sound? During her turn at the mic, she demonstrated a knack for pouring out notes like they were made of thick molasses. Alas, she was so pitchy, she belonged on the mound at a baseball game, not on that stage. 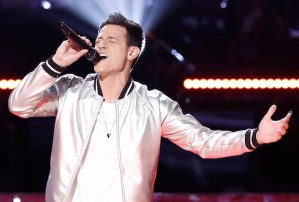 Team Blake: Pryor Baird singing “Will It Go Round in Circles” (Grade: B+) defeated Jaron Strom singing “Grenade” (Grade: D) | When Pryor took to the mic, he went full-on Joe Cocker on his Billy Preston cover, turning out a performance that thoroughly shredded the song if not his vocal cords, too — seriously, when he was done, I wanted a hot tea with lemon and honey, and I’d only been listening to him. You could argue that he’s a one-trick pony, but if spitting gravel is his one trick, he’s damn good at it. That said, I’ll be eager to see how he sounds on a ballad. As for Jaron… Oh dear. As if he wasn’t already outgunned being pitted against Pryor, he bit off way more than he could chew by taking on Bruno Mars and sounded for much of the song like he was in pain. He wasn’t the only one. 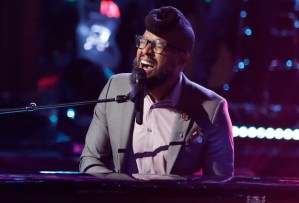 Team Alicia: Terrence Cunningham singing “Tell Me Something Good” (Grade: C) defeated Christiana Danielle singing “Elastic Heart” (Grade: B) — Christiana saved by Alicia | As far as branding goes, Christiana is doing a bang-up job. Her stripped-down version of Sia reminded me of her spare “Hotline Bling” in the Blinds, and helped her take another big step toward establishing herself as a glorious Mother Earth type whose vocals can go within a single song from delicate as a dewdrop to forceful as a hurricane. I could do with (a lot) less vibrato from her, but I’m definitely a fan of her song reinterpretations. And speaking of reinterpretations… I was disappointed to realize that Terrence wouldn’t be revamping his Rufus & Chaka Khan cover as dramatically as he had “My Girl” in the Blinds. I was further disappointed to hear his rendition. It was vocally all over the place — a bag of tricks just spilled across his keyboard with a lot less rhyme or reason than was needed. Clearly, the guy can sing — and in Chaka’s key, for Pete’s sake. But if his voice is a weapon, he’s gotta give some more thought to the direction(s) he points it in from second to second; this just didn’t gel. And shouldn’t a number this playful have been a little more, you know, fun?

So, who stood out to you on Night 2 of the Knockouts? Vote in the poll below, then hit the comments.