Tuesday’s Rise explored new romantic possibilities within the Stanton High drama department, though not everyone was feeling the love.

The first big kiss went down between Robbie and Lilette, the only bright spot in an otherwise terrible weekend for Robbie, who (rightly) took the blame for his team losing to Oakwood Tech for the first time in 10 years; the announcer referring to Robbie as a “sophomore slump” was merely the cherry atop his poop-flavored sundae. To make matters worse, a fight broke out at his “victory party” after a few of the football team’s jerkier members started giving Michael a hard time about his transition.

Though fans of Robbie and Lilette’s blossoming romance were likely thrilled by their long-awaited lip lock, something tells me that Robbie’s dad won’t see it the same way. Maybe that’s because, after giving Lilette a personal tour of the shrine he built for his son, he told her, “I think he has a real future… if he stays focused. A good friend wouldn’t distract him from his purpose.” 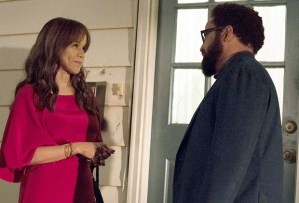 This week’s other notable necking happened between Ms. Wolfe and Mr. Kranepool. Their date may have gone up in smoke when he revealed that Mr. Mazzu was the driving force behind their date — he referred to Ms. Wolfe as being “very single” — but Mr. Kranepool turned it around with genuine flattery and worked his way back into Ms. Wolfe’s good graces, even snagging a goodnight kiss on her doorstep.

And we almost got a kiss between Simon and Jeremy, who both admitted that they’re going to miss each other when Simon heads off to St. Francis. Jeremy was clearly putting the emotional feelers out there when he told Simon that he sometimes forgets that their scenes together aren’t real, a point on which Simon agreed… before running inside to throw up.

The episode’s non-romantic drama centered (once again) around Gordy’s drinking problem. When he ditched a family trip to party at Robbie’s, Mr. and Mrs. Mazzu stormed the place like it was the damn Bastille, where they were greeted outside by their “milk”-drinking son. Though Mr. Mazzu was ready to drag Gordy home using force, his wife thought it better to de-escalate the situation.

Your thoughts on this week’s Rise? Drop ’em in a comment below.