Don’t you just hate when dozens of bodies mysteriously wash up on your town’s beach, right after you became the new sheriff?

For Jude Ellis, that odd scenario becomes reality in ABC’s The Crossing, which debuted Monday night. Jude, played by Treme‘s Steve Zahn, recently relocated from Oakland to Port Canaan, a fishing town on the Oregon coast. But even though he came to the Pacific Northwest for a quiet life — “You must have seen a lot [of bodies] in Oakland,” his partner observes — Jude gets the exact opposite when hundreds of bodies appear on the town’s beach.

Though many of these men and women drowned before their bodies popped up on the coastline, 47 of them survived their time in the water, and they tell a bizarre tale of why they came to Port Canaan: These refugees are from 180 years in the future, and they’re fleeing a war that’s going to happen in America one day, when a super-powered species called Apex threatens to wipe out the human population. As soon as an opportunity presented itself, the group capitalized on rumors it had heard about time travel, and the refugees tried to transport themselves to “The Long Peace” — aka present day — but something must have gone wrong for them to turn up in the ocean.

Fortunately for us, The Crossing skips over most of the skepticism that law enforcement officials typically have on shows like this. Rather than refuse to believe these people are from the future, Jude and Homeland Security agent Emma Ren (House of Cards‘ Sandrine Holt) approach the situation with cautious curiosity in an attempt to learn more about the refugees. 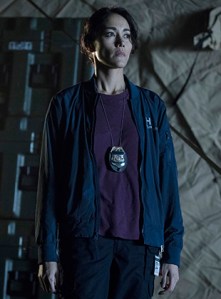 But there’s one outlier: a woman named Reece (APB‘s Natalie Martinez), who got separated from her young daughter, Leah, when they were still underwater in the Pacific Ocean. Instead of washing up on Thorn Beach, Reece regains consciousness on a fishing boat near Port Canaan, and she doesn’t learn about the other bodies until she hears about them on a TV news report later that day.

She decides to make her way to the town, where she holds Jude at gunpoint in his car and forces him to “take [her] to the dead.” He does, but Reece doesn’t find her daughter among the corpses — and just when she begins to question Jude about refugees that survived, she’s interrupted by Homeland Security agents who try to detain her… and she decides to unleash the superpowers she apparently has, taking the agents down with super-strength before literally flying out of the building. (Well, it’s more like a Jessica Jones mega-leap than actual flight.)

It turns out Reece did a real number on the men she attacked; X-rays show that they might as well have gotten hit by a truck, and that’s enough to get Emma believing the refugees’ stories. If Reece has these abilities, is she a member of the Apex species? And could there be more super-powered people in this group of 47 survivors? For now, we only know about Reece, who ends the episode by breaking into Jude’s house — but he knows she’s there, and he gets her to drop her gun before asking her to recount the inevitably insane story that led her to his town.

* One of the refugees, Thomas — who seemed a little devious from the start — goes to Emma with information that he thinks the government will find very interesting: These 47 refugees aren’t the first to migrate to present-day America. There was another group that came before them, and the OG refugees have big plans, “the kind that change the course of history.”

Though Thomas first asks to meet with the U.S. president to discuss his intel, he ultimately settles for Craig Lindauer, Emma’s superior at the Department of Homeland Security. After hearing Thomas’ story about this first batch of refugees, Craig asks, “Would you be able to identify them by sight?” Then he takes a step toward Thomas, finally emerging from the shadows to show his face, and Thomas gasps: Craig is one of the first refugees, and he’s clearly embedded himself in normal American society. “How long have you been here?” Thomas asks, to which Craig answers, “Longer than you think.”

* Romantic subplot alert! Though Homeland Security agents aren’t supposed to interact with the refugees, a young man named Roy breaks his department’s rule to forge a sweet connection with a girl named Hannah.

* During the refugees’ bus ride to their temporary housing, Reece’s daughter, Leah, pulls up her sleeve to reveal a scaly rash on her arm, which seems to be getting worse. Does this mean she’ll have powers like her mom, who kissed her underwater before the bodies reached the shore? Or does she just need a good eczema cream? So many questions!

OK, your turn. What did you think of The Crossing‘s debut? Grade the series premiere in our poll below, then hit the comments to back up your choice!