Question: Season 3 of Stranger Things feels like it’s ages away. What can you tell me now? — Brenda
Ausiello: Though the Mind Flayer is alive and well, “his soldiers, which were the Demodogs, were vanquished,” executive producer Shawn Levy reminded TVLine at the show’s recent PaleyFest panel. And that’s a huge problem for a Big Bad. How does he solve it? “I can’t tell you what new strategies that evil might employ, but he’s not done with Hawkins,” said Levy, adding ominously: “He’s going to find a way.”

Question: Anything new you can tell us about Stranger Things‘ next season? — Jem
Ausiello: If you liked the alternately volatile and tender father/daughter dynamic between Hopper and Eleven in Season 2 — and really, who didn’t? — you’re going to love what Season 3 has in store. When asked at the series’ PaleyFest event if the pair’s relationship is going to change now that the chief is legally Jane’s dad, Millie Bobby Brown replied succinctly, “It’s not. I think it just makes things more legitimate and real.” 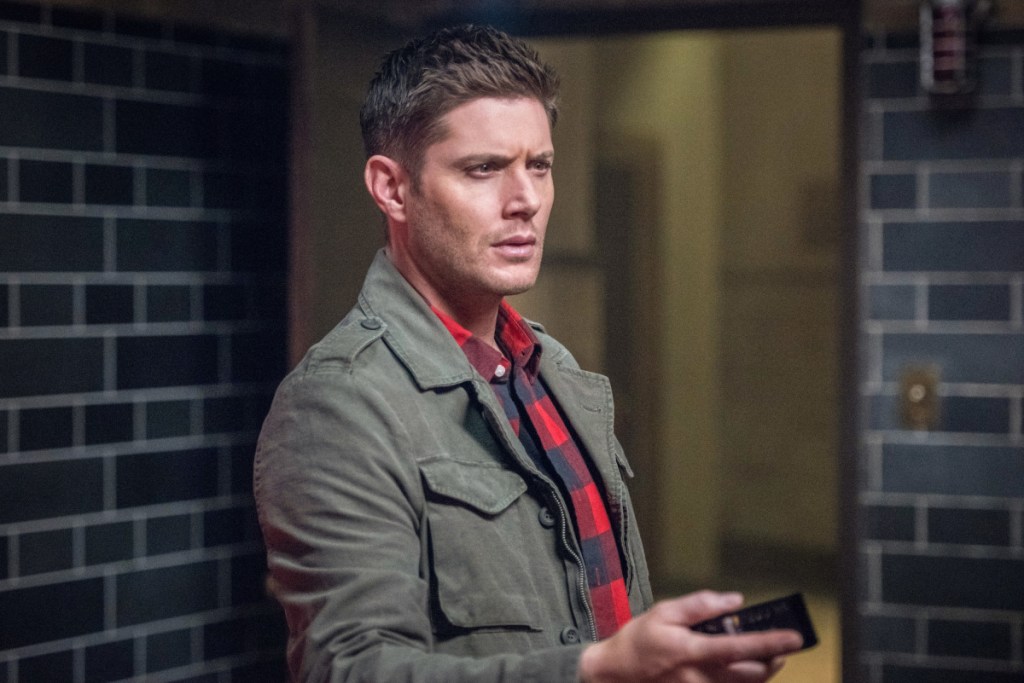 Question: Anything on the remaining episodes of Supernatural? —Claire
Ausiello: Executive producer Andrew Dabb promises not one but “two very surprising returns” before Season 13 is over, while EP Robert Singer confirms that “there’ll be an alternate universe” version of a character à la Alt Bobby and Alt Kevin Tran. Adds Singer: “A lot of the end of this season is getting the whole gang back together. Scheduling has been really difficult with everybody because they’re all working actors, but we’ve managed to cram pretty much everybody that the audience loves into this final run of episodes.” You guys thinking what I’m thinking?!

Question: Do you have anything on Suits? —Rowan
Ausiello: Prepare to get some insight into Louis’ past via flashbacks in this Wednesday’s episode. “We get to meet teenage Louis and [his sister] Esther, and we [learn] a lot about Louis’ underlying psychology with women,” previews showrunner Aaron Korsh, adding that the remaining Season 7 episodes will delve into “the aftermath of Louis’ decision to sleep with Sheila, and how that’s going to resonate in his life. Louis takes a big journey.”

Question: Any intel on the Empire season finale? —Justine
Ausiello: It’s going to make last season’s amnesia twist look like child’s play. “There’s no cliffhanger like this one,” declares co-exec producer Craig Brewer. “In terms of story and character and downright jaw-dropping OMG-[ness], this is going to be the best cliffhanger [we’ve done]. When people see where this back half of the season is going in terms of how the Lyon family gets attacked, they will be stunned. We’re setting the table for something really surprising.” 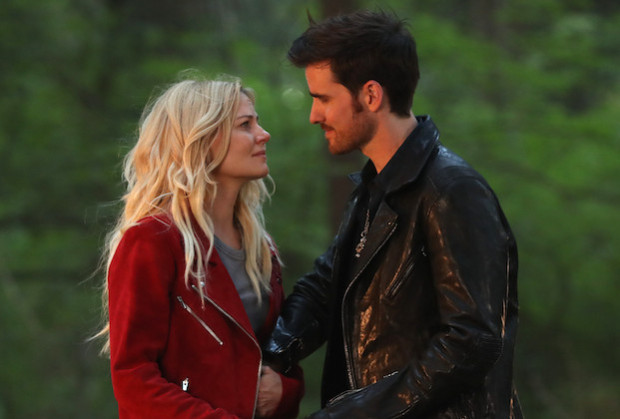 Question: Will we get to see Once Upon a Time‘s original Hook again before the end of the series (with or without Emma)? –Katie
Ausiello: As you may have surmised since emailing this in — given this slew of confirmed returns — Colin O’Donoghue will be playing two roles as the series winds down, the actor shared during our visit to the set. In fact, O’Donoghue said that the before our arrival marked “my last day dressed as a pirate,” for a scene with returning leading lady Jennifer Morrison. “It’s a lovely little moment,” he smiled. “Anyone who’s a fan of Hook and Emma being together will get a kick out of it.”

Question: Any chance your BFF Lauren Graham might be guest-starring next season on 9-1-1 opposite her significant other Peter Krause? —Peter
Ausiello: Would you believe me if I told you that there’s talk? Because there is! Well, there was. Kinda. You see, it was informal dinner-party talk but it was talk nonetheless. I’ll let EP Ryan Murphy explain: “[The idea] came up in a funny way. We had a dinner at the Chateau Marmont a couple of weeks ago celebrating the success of the show, and Lauren came with Peter. I’ve always loved her work. And we made a couple of jokes about her coming on as a patient in a very bizarre 9-1-1 call and she laughed about it. She seemed open to the possibility.”

Question: I need Riverdale scoop! Are Betty’s mom Alice and Jughead’s dad F.P. about to hook up? — Kelsey
Ausiello: Avert your eyes, Betty and Jughead: Alice and F.P. may very well be getting romantic soon, according to cast member Skeet Ulrich. “I think there’s a lot of feeling there,” the actor says. “There’s a lot of history, and a lot of love.” While he doesn’t exactly promise romantic fireworks, he did take notice of Alice’s hardcore Serpent turn in this week’s episode. “She’s into it,” he says with a smile. Complicating matters, though, is the return of Jughead’s mom and sister Jellybean, with an EP promising, “They’re coming.” 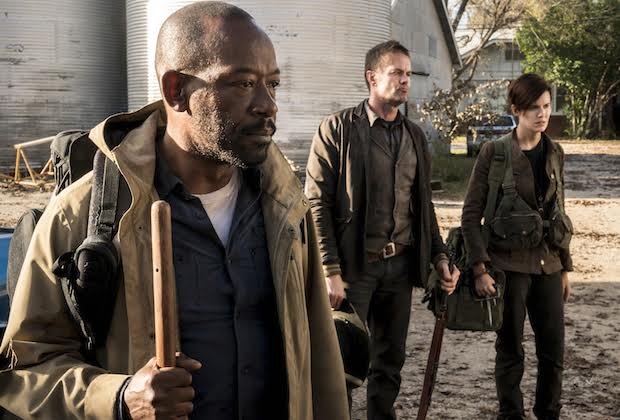 Question: What can you tell me about the new season of Fear the Walking Dead? — Paul
Ausiello: The Season 4 premiere (airing Sunday, April 15 at 10/9c) won’t just feel like a new season. Rather, as focused as it is on The Walking Dead‘s Morgan and other new characters, it’ll feel like a new show. But the good news is, it’s almost impossible not to like Garret Dillahunt, who plays gunslinger John, and Maggie Grace’s Althea is plucky and appealing enough to remind you of TWD‘s Maggie. There’s also a twist in the hour that’s as nasty and shocking as a dagger to the gut.

Question: Is there still a chance of getting Felicity’s company off the ground in this season of Arrow? —Rita
Ausiello: “Yes, Helix Dynamics sort of comes back,” Emily Bett Rickards responded when Matt Mitovich hand-delivered your question to the set last week. “Felicity and Curtis obviously got in a bit of a disagreement over a big problem, and I say their disagreement is ‘little’ because we do come back to Helix Dynamics without addressing it a major way. They just decide to accept each other back, because I think they miss each other more than anything. Which is nice. Sometimes space and time [heals wounds].” Added Echo Kellum: “You’ll see Felicity and Curtis get back on the ball, making sure that they’re focused on doing what made them great in the first place, by delving into some dynamic technologies.”

Question: After last night’s Jesus Christ Superstar Live, I want every bit of scoop you’ve got about Brandon Victor Dixon on Power this season. —Ana
Ausiello: Superstar‘s Judas played it cagey when we asked him about Terry Silver’s future in the Starz drama. “I will say that Terry is still present” in Season 5, Dixon told TVLine — which is something, given that the earnest lawyer is actively pursuing Ghost’s wife, Tasha, and therefore might have a very short life ahead of him. But he wouldn’t elaborate further, except to say that the last two episodes of the coming season are “awesome.”

Question: I know it is very early but how is it looking for a Timeless renewal? Please tell me good things! —Jamie
Ausiello: According to TVLine’s Renewal Scorecard, it “could go either way” and TVLine’s Renewal Scorecard never lies. (OK, we didn’t see that Dynasty pickup coming, but who did?!) Speaking of trustworthy sources, executive producer Eric Kripke says now that Garcia Flynn is living in the silo, expect him to make his presence known — beginning with this Sunday’s trip to the Salem witch trials. “Flynn down in that bunker is a match to a barrel of gunpowder,” the EP teases. “Everyone is in close quarters, everyone has their backs against the wall, everyone’s stressed, everyone is dealing with some pretty intense emotional issues…. And then here comes Flynn, who is only there to stir up s–t.”

Question: I was wondering if you have any scoop on Chicago Fire. —Karina
Ausiello: “Dawsey” isn’t done talking about expanding their brood, per Jesse Spencer. “Casey wants to have children,” he says, before adding with a laugh, “He doesn’t want to be dragging them in off the street. He wants to start his own family. It’s going to come up again [this season].”

Question: Alexis’ first full episode of Dynasty was everything! Is the rest of her time on the show going to be this over-the-top? —Susan
Ausiello: Do you consider “a fire, a fight and a wedding” to be over-the-top, Susan? Because Nicollette Sheridan told Andy Swift that we can expect all three as the show marches toward its season finale.

Question: I can’t believe Scandal only has a few more episodes left. Can we count on an official “Olitz” reunion in the series finale? –Reuben
Ausiello: I can’t speak to that couple, unfortunately, but if you’re down for scoop on another original Scandal pair, keep reading: “We’re definitely serving more David and Abby for the next three episodes,” Darby Stanchfield teases. “And let’s just put it this way: Something incredibly shocking happens for these guys that I’m still processing. Abby has a dramatic ending with a capital D.” 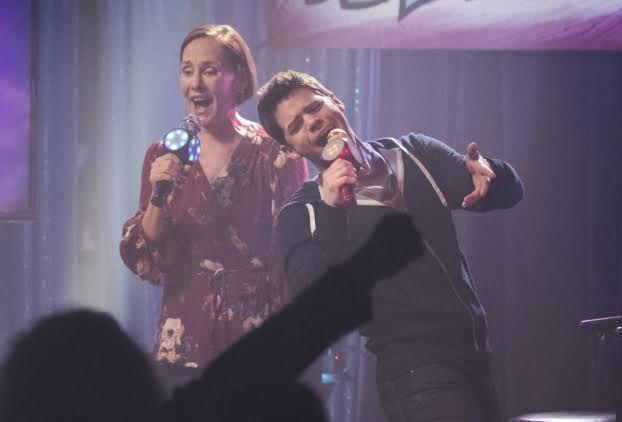 Question: I’m really looking forward to seeing more of Jeremy Jordan on Supergirl. What can you tease about the Winn-centric episode? —Jen
Ausiello: The CW series’ midseason premiere (airing Monday, April 16) features “Dame Laurie Metcalf” (as Winn’s mother) as well as some “phenomenal” flying monkeys, exec producer Jessica Queller raved during our visit to the set. “It’s one of my favorite episodes of the season,” she added, “a showcase for Winn, about his father and his mother and that backstory.” It also boasts “something we in the writers room like to call ‘Kara-oke’ — a karaoke bar scene that bookends the episode, with all of our amazing actors who happen to have amazing voices singing” — including, yes, Chyler Leigh, who missed out on last year’s musical ep.

This AAnd That….
♦ Save the date, West Coasters: I will be appearing at the Los Angeles Times‘ annual Festival of Books on Sunday, April 22 talking about Spoiler Alert: The Hero Dies and signing copies and guzzling gratis Diet Coke. The festival will once again take place on the campus of my alma mater University of Southern California, and my panel — “Memoir: The Unexpected Hard Stuff” — will be held at Hoffman Hall at 11 am. Come say hi!
♦ Start clutching your pearls now: The May Sweeps Scorecard is coming this week.
♦ I’m late to the Schitt’s Creek party but I’m here now and I am madly, deeply in love, so…