A Different World — I mean, grown-ish — aired its Season 1 finale on Freeform on Wednesday, and revealed to viewers which guy Zoey chose to pursue a relationship with. 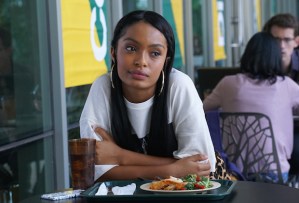 Television shows have a way of inaccurately portraying what they deem “average” lives. Houses, neighborhoods and wardrobes can and tend to be exaggerated. (C’mon, there’s no way the Friends cast actually lived in those NYC apartments given the characters’ salaries.) Being a college student myself, I watched all season and took a hard look at how grown-ish portrays higher education. Basically, how does the series’ interpretation of a campus and students’ experiences compare to the real world?

Interestingly, Shahidi herself is currently taking a gap year to film grown-ish before starting her studies at Harvard University. (Click here to see who wrote her a letter of recommendation.) So kudos to Freeform for casting college-aged actors to play college students.

Mine and Zoey’s college experiences are different. For instance, she attends a large West Coast university, while I attend a smaller East Coast liberal arts school. Despite that, grown-ish‘s overarching themes — social acceptance, belongingness, individualism and peer pressure being a few – are things with which every college student grapples.

The independence that comes along with going away to college forces you to come into your own. At one point in the season, Zoey was served a piece of humble pie and admitted that college is a lot tougher than she was expecting, a realization that many college students have within the first few months of freshman year. I myself struggled to find my place freshman year, causing anxiety and homesickness. Mental illness is a hot topic on many college campuses, and I think the writers missed an opportunity to take a stand on the importance of self-care here. But, there’s always room for that in Season 2.

Grown-ish does a great job at touching on hot topics on college campuses in tasteful ways. A few examples: 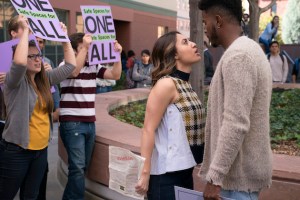 SOCIAL ACTIVISM | College students are known for activism, growing as individuals and discovering how they are affected by public policy or social movements. As Zoey puts it, Generation Z is “racially diverse, sexually diverse, ultra-socially conscious and hyper-sensitive.” The Black Lives Matter movement and LGBTQ rights are discussed in the first episode, as Zoey tells viewers about the all-gender bathroom and Aaron shows off his Black Lives Matter, “I Can’t Breathe” and “Michelle 2020” pins to his classmates.

So, when Cal U students hold a rally over an increase in drug testing and random searches on campus, I wasn’t surprised. It’s not uncommon for college students to assemble when they oppose changes made by the school’s administration. My college organized protests after our president displayed racist tendencies, ultimately leading to his resignation. I do believe in the power of student protests. What did surprise me though, was that a mere two episodes later, the students are again holding another demonstration on campus about a completely different topic, in which Zoey calls herself a “Che Guevara in Timberland heels.” Do they have enough time to protest twice in just a few weeks? 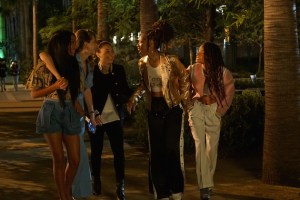 FRIENDSHIP | One of the most heartwarming and genuine aspects of this series is Zoey’s relationship with her girlfriends. Zoey, Nomi, Ana, Sky and Jazz help each other get over breakups, give advice and support one another. I have found the age-old saying to be true: You find your best friends in college. Quick shoutout to my best friends. (You know who you are.)

HOOK-UP CULTURE | Another key aspect to college life is hook-up culture, whether we like to admit it or not. One of the biggest issues with hookup culture though, is that it means something different to everyone. The scene in Episode 3 where Zoey and her girlfriends are discussing how Zoey should respond to a text message is eerily similar to conversations that I’ve had with my girlfriends. Aaron texts Zoey “U up?” after a party and she promptly calls all of her gal pals into her dorm room to decode the message and make a plan of attack. Another thumbs-up to Freeform for recreating a scene that many girls have lived numerous times.

DRUG SCENE | Similar to hook-up culture, drugs are prevalent on every college campus and I commend the writers of grown-ish for not shying away from portraying the college drug scene. Zoey quickly falls victim to peer pressure when it comes to trying drugs she vowed to never use. Whether through stereotypical peer pressure tactics, or personal choices, many college students experiment with substances. Vivek becomes one of Cal U’s biggest prescription pill dealers and Zoey finds it extremely hard to resist taking an Adderall in order to complete all of her work.

I find her struggle with study drugs to be rather accurate. Adderall is one of the most common study drugs on college campuses, and a lot of students get their pills from friends who have the prescription. By the end of the season, Vivek calls Zoey out for taking Adderall when she doesn’t really need it, as some college students find simply being in college a good enough excuse for excessive drug use.

So yes, grown-ish is a pretty — and pretty accurate — TV version of a college campus… except for one thing.

No freshman dorm room is that big.