“The Battle starts now!” Before we get to the reviews of Tuesday’s Battles on The Voice, can we just take a moment to appreciate the way Carson Daly always tells us when a sing-off is beginning? It’s one of the show’s endearing idiosyncrasies that I can’t help but laugh at and love at the same time. Wouldn’t we, um, notice that a Battle has started, even if Carson didn’t inform us? I’m going to give us enough credit to say yes. Yes, we would notice. Still, it cracks me up, and I’ve grown to like that the producers have him do it — so much so that I may borrow the technique. Let’s see how this works… The recap starts now!

Team Adam: Jackie Verna (Grade: C) defeated Stephanie Skipper (Grade: D) on “These Dreams” | You know how sometimes, you’ll be in the grocery and they’ll be playing a song you know, only it’s not being performed by the singer who originally did it? That’s the kind of artist Stephanie reminds me of. She’s good, you just wouldn’t necessarily go out of your way to hear her sing. Jackie, on the flip side… there’s something different about her, something ear-catching. Maybe it’s that little bit of vulnerability with which she can’t help but infuse her notes; it makes you wonder whether she’ll rise to the challenge she’s singing about or curl up in a ball. Either way, though, you lean in to listen. That’s gold. On stage, however, both contestants started off a bit wobbly. Stephanie then went on to put so (!) damn (!) much (!) vibrato in her voice, I would’ve sworn someone was shaking my TV. Eventually, the two of them wound up more or less yelling choruses in hopes of making an impression. They did — just not great ones. Jackie’s gonna need to get those nerves under control to survive the Knockouts.

Team Alicia: Terrence Cunningham (Grade: A) defeated Livia Faith (Grade: A) on “Stars” | As much as I loved the idea of this pairing — did anyone not think that they were gonna sound divine together? — I also hated it, since it meant that Alicia would have to drop one of them from her team (and she was the only coach with a Steal left, so they couldn’t even get saved!). Even just in rehearsal, Livia sounded like a waking dream. Terrence, meanwhile, whipped out his amazing falsetto like he carried it around with him in his pocket. During the Battle, Livia’s warm voice wrapped like a soft blanket around the melody, allowing Terrence’s beautiful, fragile high notes to call out like a lullaby for the soul. Seriously, their performance was as lovely and delicate as a moonbeam. The longer it went on, honestly, the more perturbed I got, knowing that one of them was about to be cut. Livia had better be Alicia’s Comeback Artist! 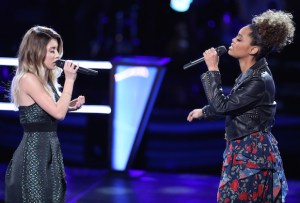 Team Blake: Spensha Baker (Grade: A) defeated Dallas Caroline (Grade: C) on “I Could Use a Love Song” — Dallas stolen by Alicia | Since Dallas’ Blind left me thinking that there was a great singer in her, if only she could get a handle on her nerves, I was curious to see how she fared in her Battle, which had to be even more pressure than a Blind, right? Turned out, she cracked under that pressure — she looked and sounded scared to death. Like a good singer who was scared to death, but nonetheless, scared to death. Spensha, as expected, brought to bear rich, soulful vocals that suggested what Keisha Renee might have been able to pull off, had she had a little more restraint during Season 13. And when Spensha got to go a little big, I thought that was it; she had it in the bag. Of course, this being the last Battle of the night, it hardly mattered — we knew that Alicia would use her Steal on whichever of them lost. (Were I her, I’d have raised my hand and asked, “Um, can I steal Livia back instead?”)

And, via montage, we learned that Gary Edwards defeated Angel Bonilla to stay on Team Adam, Austin Giorgio defeated Brett Hunter to remain a part of Team Blake, and Team Kelly’s Hannah Goebel had to leave the show for personal reasons, so Alexa Cappelli won that non-Battle by default.

So, who did you think was Tuesday’s standout? Vote below, then hit the comments: Who are you hoping will be the Comeback Artists? Genesis Diaz, Molly Stevens and Livia Faith immediately come to my mind.