If first impressions are everything, then Supernatural‘s Dean is off to a good start with Scooby-Doo and his pals.

In TVLine’s exclusive video from Thursday’s animated crossover (The CW, 8/7c), the hunter introduces himself and his brother Sam to the Scoobies and offers up their services as “mystery solvers” — but first, he has to get his bro on board.

“There are no words in this newspaper, Dean!” Sam exclaims, pointing out the craziness of their situation. He then accuses his brother of being more interested in “hanging out with Marmaduke” — “How dare you!” Dean replies — and hitting on the unavailable Daphne than trying to get back home. Dean, however, thinks they just need to play their part, a la Season 5’s “Changing Channels,” and so he asks Fred & Co. if they can tag along on a mystery. 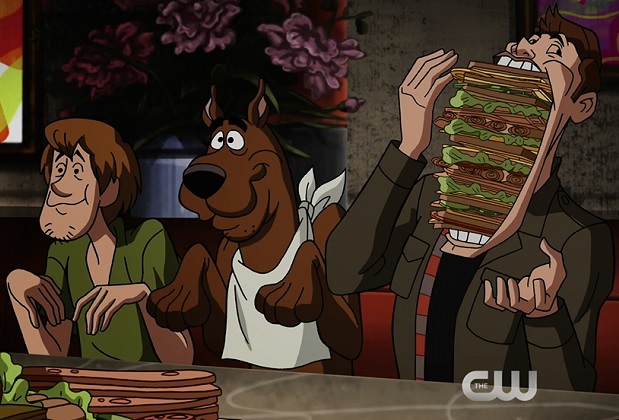 Before the group hits the road, though, it’s time for Scooby, Shaggy and a very eager Dean to consume all the sandwiches. (How spot-on is Sam’s exasperated face?)

Read on for five “ScoobyNatural” teasers from the show’s cast and producers, then hit PLAY above to watch the sneak peek.

* Executive producer Andrew Dabb advises fans to keep an eye out for “a lot of little Easter eggs,” and in particular, “one specific cameo in the kind of helter-skelter chase between doors.”

* EP Robert Singer describes the “fun standalone” as “a romp.” “I think the animation is terrific,” he adds. “We have a really nice way in, and a good way out. It’s a great combination of the Scooby world and the Supernatural world, and it seems to blend fairly effortlessly.”

* Dean has “a few choice words for Fred,” star Jensen Ackles teases. “[He’s] not a big fan of Fred, simply because he’s getting in the way of [Dean’s] advances to Daphne.”

* Meanwhile, “Sam and Velma, both being the bookish, intellectual types, have some fun banter,” actor Jared Padalecki shares. 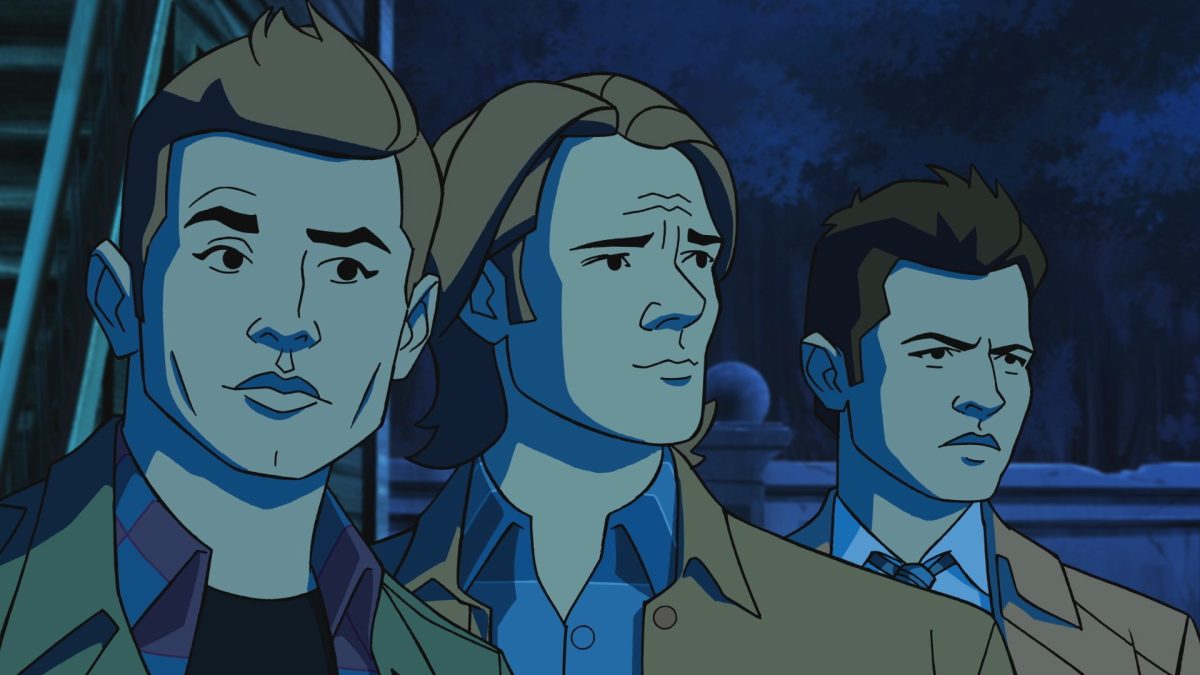 * How did the show’s leading men react when they first saw their animated selves? “I was like, ‘Oh, wow, I’m a lot taller on the animated series,'” Ackles describes. “It was great. ‘Cause it’s not just some cool, modern animation. It’s, like, old-school Scooby-Doo animation. Sometimes, you think about how you would animate yourself, but then you see these professional artists, and it’s like, ‘Oh, that’s what they think of me. That’s their rendering of me.’ That’s really unique. It’s almost like looking at yourself through somebody else’s eyes, which is very cool.” (For the record, Ackles’ wife Danneel approves: “Cartoon Jensen is hot!”)

As for Padalecki, his first thought was, “‘I wish I looked like that,'” he says with a laugh. “I was like, ‘Alright. They did me some favors. I’ll take it.'” Continuing with the trend, Misha Collins also loved “how tall and lean” cartoon Cas was.

Supernatural fans, hit the comments with your excitement for the “ScoobyNatural” adventure!