Splitting Up Together‘s Lena and Martin are harried, suburban parents of three. The pair is no longer in love and planning to divorce. But because they owe more on their mortgage than their home is worth, and because divvying up parental duties is hard enough without adding new locations into the mix, Martin and Lena have decided to continue living together — though pursuing separate lives — while co-parenting their children.

Consider it conscious uncoupling for the somewhat financially strapped set.

In a moment, we’d like to know what you thought of ABC’s new comedy from Emily Kapnek (Selfie, Suburgatory), which premiered Tuesday. But first, a quick recap. 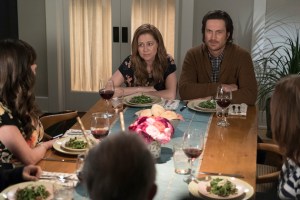 We meet Martin (Nashville‘s Oliver Hudson) and Lena (The Office‘s Jenna Fischer) as they’re telling friends and family their divorce news over dinner. The change makes sense, Lena says, because though she and Martin were once wild about each other, “Our relationship became that of two camp counselors.” As we watch a montage of happy and trying times from their life together, Martin pipes up, “She was mad I didn’t do more. But whatever I did was wrong, anyway.” Lena counters, “That’s just how he justifies not making an effort.” Anyway, they agree that continuing to raise the kids together will work best by swapping weeks: On “on” weeks, the parent in charge will reside in the main house and be responsible for every little domestic detail, while the “off” parent stays in the furnished garage.

Sound complicated and fraught with potential conflict? That’s exactly the reaction the couple gets from married friends Camille (Beverly Hills, 90210‘s Lindsay Price) and Arthur (MADtv‘s Bobby Lee), as well as from Lena’s sister Maya (Numb3rs‘ Diane Farr) and dad Henry (Dexter‘s Geoff Pierson). “We’ve been living separate lives for years,” Lena points out; as the half-hour progresses, we learn that Martin is a narcissist who didn’t dance with Lena at their wedding because it made him uncomfortable, and that Lena has control issues that might have led Martin to feel like a failure.

But it soon becomes clear that the plan to share responsibilities isn’t going to work out as cleanly as envisioned. Lena fumbles her way through helping their teen son, Mason, deal with the onset of puberty. Martin’s attempt to better himself — by hiring a pretty private dance instructor — makes Lena mistakenly think he’s already moved on to younger, more romantic pastures. But Lena gets a date out of it (Mason’s doctor), and Martin realizes that he was a “bad partner” in just about every sense of the word, and the soon-to-be-exes end the hour by reaching a solution about where and with what inspiration their adolescent son should pleasure himself. (Yes, really. Doctor’s orders!)

Is there still something spark-y between Martin and Lena? Of course. Are there enough little irritating things about each of them to delay out their likely reconciliation? Oh, heck yes. And here’s a good a place as any to tell you that Splitting Up Together is based on a Danish series and that Ellen DeGeneres is one of the American adaptation’s executive producers.

Now we’d like your thoughts on the new series. Grade Splitting Up Together‘s premiere via the poll below, then go to the comments and expand upon your thoughts.