When you really break it down, American Idol‘s Hollywood Week is a lot like a trip to Willy Wonka’s Chocolate Factory.

Think about it: An army of young dreamers show up with golden tickets in hand, then get pushed to their breaking points until only those with the purest of hearts remain. Honestly, if you told me that Ryan Seacrest is just a bunch of Oompa Loompas standing on each other’s shoulders in a skin-suit, I’d at least hear you out.

Sunday’s episode marked the beginning of Hollywood Week for the 169 singers remaining in Season 16, entering what Luke Bryan calls “the process of getting the number down to the cream of the crop, the best of the best.” By the end of the week, only 24 contestants would move on to the main stage.

Tonight’s highlights come in the form of the “best” and “worst” performances from the solo and group songs:

* Did you not get chills from Alyssa Raghu’s acapella performance of Bette Midler’s “Wind Beneath My Wings,” which she dedicated to her dad? She displays a rare vulnerability when she sings, which I always appreciate. Few other singers in this competition have so much emotion behind their voice.

* Noah Davis may be soft spoken, but he always blows my mind when he starts to sing. The wig-loving goat farmer effortlessly nailed Jessie J’s “Mama Knows Best.” Bravo.

* Catie Turner was the contestant I was most excited to revisit during Hollywood Week, and she did not disappoint, absolutely killing the Beatles’ “Come Together.” This girl’s got more energy and attitude than almost anyone else in the competition, and the audience loves her. What more is there to say?

* The fact that Jonny Brens doesn’t have his father’s support in his musical endeavors is made all the more baffling by how talented he is! His silky smooth voice fit The 1975’s “Somebody Else” like… well, a silky smooth glove. I won’t even discuss where I got chills from that final riff. (I also loved that his sister was like, “I didn’t know he could do that!” Hopefully his dad comes around, too.)

* Jurnee is also quickly becoming one of my favorite performers. Wearing her lucky bandana — which also reminds her of her wife, a soldier in the Army — she effortlessly breezed through to the group rounds with an angelic solo performance, then carried her group’s rendition of Justin Bieber’s “Love Yourself” all the way to the finish line. (Side note: If I never hear that song again after tonight, I’d be OK with that.) 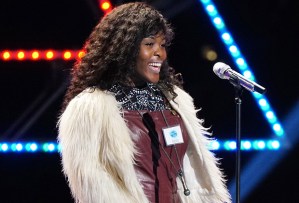 * No question, the best group to perform tonight was Don’t Touch. “You all have stardust on you,” Katy Perry told the four ladies — Britney Holmes, Lee Vasi, Gabbii Jones and Crystal Alicea — after their confident, empowering performance of Rixton’s “Me and My Broken Heat.” I also loved that they chose the song (as well as their name) in order “to encourage women and young girls to reclaim their minds, their bodies and their hearts.” Perry’s little follow-up prank, making one member of the group sacrifice herself to let the rest continue, may have been cruel, but at least it proved that Alicea (who actually volunteered!) is just as kindhearted as I hoped.

* My other favorite group performance of the night came courtesy of Taco!, so named because “you’re going to want to taco ’bout us.” And boy were those ladies right. With Queen Turner taking the lead, this ready-made girl group served up a tight, harmonious rendition of Sam Smith and Naughty Boy’s “La La La.” Victoria McQueen (the girl born on the same day Idol premiered) and Raghu (clearly the Camila Cabello of Taco!) also impressed the judges and earned a pass to the next round.

* Twins Milo and Julian Sposato charmed the judges with their initial audition — in which they also played trumpet and saxophone — but there was nothing remarkable about their individual performances during Hollywood Week. Frankly, I would have given them both of ’em the boot, but the judges saw something in Milo, sending him (but not his brother) ahead to the group round. (Speaking of that group round, I’m surprised Milo survived. I suspect his stage mom is going to be trouble.)

* Sometimes it takes more than simply hitting the right notes to deliver a good performance. Case in point: Zach D’Onofrio, 17, whose rendition of “Cry Me A River” by Michael Bublé wasn’t technically bad, but it was just… not super enjoyable. (Had this been an audition for a high school musical, it would have been considered a knockout.) In case you can’t tell, I’m pretty conflicted over this one, as were the judges — though they ultimately decided that this was the end of the road for him.

* The first true train wreck moment came courtesy of the first group performance. Sure, the fivesome pulled it together in the end, but their arrangement of Clean Bandit’s “Rather Be” started out all over the damn place. And I was shocked that only one member of the group was eliminated as a result; Kourtney Smith was the group’s sole saving grace in my opinion.

* Of course, that performance was flawless compared to Gurope’s weird, low-energy rendition of the Bee Gees’ “Stayin’ Alive.” Words were forgotten, notes were lost, it was a mess. In fact, it was — as Lionel Richie suggested — each of the singer’s “worst nightmare” come to life. Still, Marcio Donaldson (the guy who adopted his sister’s baby) and Maddie Zahm (the girl who sang “Firework” with her best friend Marcus at her audition) were given opportunities to shine, and I was glad to see them continue on.

* Can we just end this thing now and crown Catie Turner the winner? Not only is she insanely talented, but her relentless positivity is infectious (“I think I should be the next American Idol because I give good hugs and I’m nice!”) and, honestly, I’ve loved everything she’s worn so far. She’s already an icon, and I won’t hear a word to the contrary.

* Guess what? I’m not done talking about Turner — specifically her relationship with fellow contestant Zach D’Onofrio, which got its own special segment this week. We got to hear about how much she likes him (“He’s funny, he’s nice, he dresses cool and he sings cool”) and we got to hear how he feels about her (“She doesn’t care what anyone else thinks, and I admire her for that”) and it was lovely. It was also devastating when D’Onofrio was then eliminated, tearing him from the arms of his beloved. Or his… friend? I’m not sure we even had time to settle on a label.

* If there was a “best haircut” category in this recap, you’d see a big ol’ picture of Jonny Brens. Because wow. 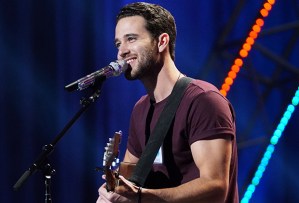 * Generally speaking, I don’t think I’m totally down with the concept of Hollywood Week — at least as it stands now. What’s the point of making these people perform in groups when this is ultimately a solo singing competition?

* I’m glad Ada Vox is continuing onto the solo round. Talent aside, I hope they make it to the live episodes just to see what looks they put together every week. We could have some real moments on our hands.

* Lastly, can we talk about Laine Hardy? I’m trying to make up my mind about him, but I’m not sure how I should feel. He was vocally unhappy about being the only guy in his group, and I’ve never seen anyone look more miserable singing Bieber. He gave about 10 percent in that performance… yet still did well enough to make it through. Is it weird that I kind of loved how little he cared?

OK, we’ve survived the first rounds of Hollywood Week. Which singers’ eliminations surprised you? Which best and worst performances would you add to our list? Drop a comment with all of your thoughts below.