After multiple interrupted kisses, Timeless‘ Lucy and Wyatt finally locked lips and slept together while visiting 1940s Hollywood during Sunday’s episode. But back in the present, the pair’s happy moment in the silo was cut short by a text message from… Wyatt’s previously dead wife Jessica!

TVLine chatted with co-creator Eric Kripke about the surprise twist and what it means for the future of “Lyatt.”

TVLINE | Wyatt’s attempt last season at preventing Jessica’s death was unsuccessful, so how in the world is she back now?
That is a mystery that will continue to be unraveled as the season progresses. That’s the best I can say about that.

TVLINE | Can you talk about how it impacts Wyatt, emotionally? He’s finally moving on in his life when this happens.
We knew as we were beginning the season that one of our biggest storylines was going to be Jessica’s return, and what that was going to do to Wyatt and the Wyatt/Lucy relationship, which now becomes a triangle. And look, it’s just really good drama. As a very young writer just starting out, Sam Raimi told me — and it was advice I always remembered — he said, “The vast majority of writing is just coming up with people you love, and then torturing the hell out of them.” [Laughs] … As much as I’m sure this is going to drive the fans crazy, it’s going to lead to a lot of intense emotional moments and a lot of problems, and good drama is about your heroes tackling problems and dealing with a lot of heart-wrenching emotion. Lucy, Wyatt and Jessica have a twisty and fascinating road ahead. 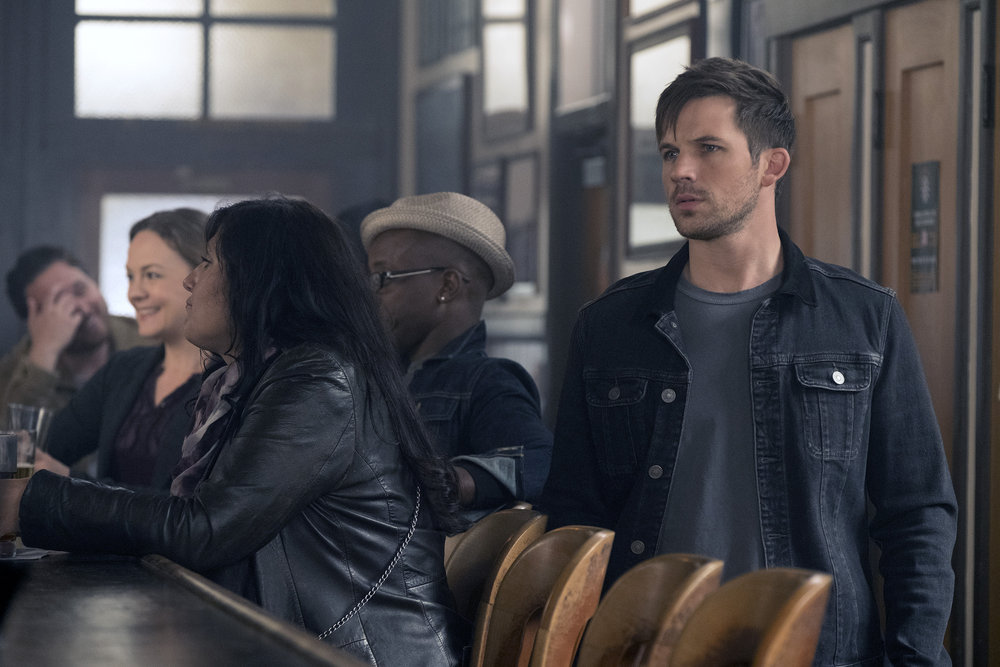 TVLINE | The night that Jessica died, she and Wyatt had a fight, but he always talks about her reverently. Has he idealized their marriage? Is that a relationship that can be saved?
Yes, absolutely. One of the things that we were really interested in in terms of the Wyatt/Jessica relationship was creating a fleshed-out, real woman that Wyatt could interact with. When he talks about Jessica, it’s as if he’s talking about an angel. In his mind, she’s so perfect and idealized, and this sort of beautiful, pure thing he had that saved him and broke him when he lost her. Our feeling was we’re doing that particular character a disservice by making her this magical, ethereal woman when she’s a real woman. Dealing with Wyatt is not easy, and she’s a real human being who is not perfect and is complicated and messy, just like all of us are. So we got really interested in the idea that their marriage was not perfect at all. They had terrible fights, and he was really jealous. He would be surly, and then he would disappear for five months at a time because he would be on assignment. That’s not a treat. We thought it was really interesting that they did not have this perfect marriage. He just made it perfect in his memory after she was killed. I think there’s real humanity to play there.

Look, we know that the audience, especially all the people that are rooting for Lucy and Wyatt to get together, it automatically puts Jessica at a disadvantage. So we’re really working hard to create a likable, human, complicated person, [and] to not just have her be a romantic rival, because that’s never going to be a satisfying character. We just really made a commitment to start looking at Jessica as her own person, with her own problems, [who is] thrown into this insane situation of realizing who her husband is and what he does. 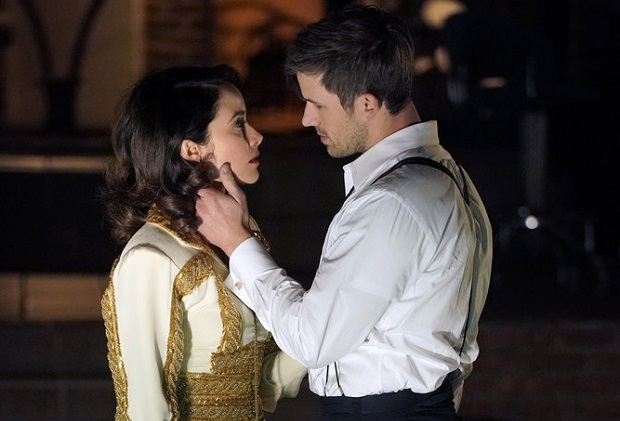 TVLINE | Her return is coming right on the heels of Lucy and Wyatt finally giving into their feelings. How does Lucy feel about Jessica?
Lucy has really complicated feelings about Jessica. She, obviously, has finally, after a lot of reflection, fallen for Wyatt. She and Wyatt have both decided to let go of the past, in a way, and their pain, and focus on a future together, and now all of a sudden comes this woman out of Wyatt’s past to really complicate things. There’s no way she can’t be hurt and confused. But by the same respect, she knows that this is the love of Wyatt’s life. And then she gets to know her, and really irritatingly realizes that she likes her and finds herself in an impossible position, because she doesn’t want to come between them. She genuinely likes Jessica and wants Wyatt to be happy. But she fell for the guy. So it really puts her in a difficult situation that I think she handles with a lot of maturity. But it’s not easy for her, either.

Timeless fans, what did you think of Lucy/Wyatt’s big moment and Jessica’s return?