Early on in Sunday’s pretty-damn-good episode of The Walking Dead, Simon told his fellow Saviors, “It’s time to do some proper slaughtering!” He wasn’t just talking about your run-of-the-mill mass murder, either; he intended to pull off an extinction-level event at the Hilltop. Read on to find out who emerged from the bloodbath with a pulse and whose expiration date had arrived.

‘IT’S ON’ | As “Do Not Send Us Astray” began, the Hilltop sentries sounded the alarm: The Saviors were en route. Within the gates of the community, Henry tried pitting his mother figure (Carol) against his father figure (Ezekiel) in hopes of joining the fray; no dice. In the infirmary, a Dr. Dana that we’d never seen or heard of (and whose existence suggested that Carson hadn’t been nearly as urgently needed as Gabriel thought) wrote off a helpful Siddiq as being someone who didn’t know enough about diddly to be of any real use. When he barked back at her, she decided that she liked him after all. (Well, that was easy!) Just after sundown, the Saviors arrived. During a walkie-talkie pissing contest, Maggie threatened to kill her 38 hostages if Simon didn’t back on up all the way to the Sanctuary. “It’s too nice a night,” Alden chimed in, “to spend it dying slow, don’t ya think?” Unfortunately, no, Simon didn’t think. In fact, he replied, in essence, “I like people who weren’t captured,” and reminded his goons that they were no longer going for infection but conclusion. Dwight, still secretly working as best he could on behalf of the AHK alliance, suggested that if Negan turned out to be alive, Simon was setting himself up for a world of hurt. But to the mustachioed villain, life-or-death mea culpas fell into the category of “future problems.”

Just then, Daryl came zooming up on his bike, bullets flying, and the Saviors sped through the Hilltop’s open gate — right into a bus that was quickly moved as a blockade. (Props to Maggie for coming up with that scheme to keep the community’s protective gates intact.) Though Alden offered to help fight off the Saviors who saw the hostages as “damaged goods,” Maggie ordered him inside. On the battlefield, Tobin was badly injured but saved by Carol before his attacker could finish him off. “Long time, no see,” he said. (And that was an understatement — the lovers last crossed paths in Season freakin’ 6!) Nearby, after Dwight declined to take out Tara for Simon, Daryl caught sight of the men approaching her and called out a warning — too late to save her from being hit by a random arrow. While someone (Enid, I think; it was dark) helped Tara to safety, Michonne pointed out to Daryl that Maggie had given the signal, and they fell back along with the rest of the Hilltoppers. Since the signal had been, basically, “Lights out!” Simon could no longer see, as he put it, s—. But, suspecting that the silence meant that the Hilltoppers had fled, he gave the order to advance on Barrington House. He even threw in the annoying Negan whistle for good measure. However, as soon as the baddies were out in the open, the lights came back on, and boom! They were sitting ducks! 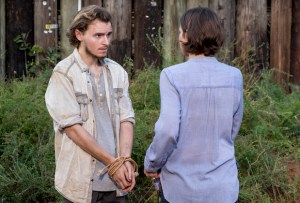 ‘WINNING JUST MEANS WE GET TOMORROW’ | Since Maggie and the Hilltoppers at Barrington House were using the Saviors for target practice, Negan’s army retreated — and was greeted by Rick (fresh from his scuffle with the Big Bad) and a hail of gunfire. While all this was going on, Morgan, as he was for most of the episode, was distracted by visions of Gavin, who’d adopted the catchphrase “You know what it is.” (And no, we never found out what “it” was.) After two vehicles full of Saviors hightailed it back to the Sanctuary, Maggie admitted to Rick what really wasn’t news: “I wanted them dead — all of them, Negan most of all.” From the “Well, duh!” file, Rick replied, “Yeah, me, too,” and detailed his attempt to strike out Lucille’s handler. The following day, while Maggie informed Enid that they had to be ready to run, as they lacked the resources to withstand another attack, Daryl refused to let Tara blame herself for Dwight’s return to the Saviors. That’s just who Scarface is, Daryl argued. Mm, maybe not, countered Tara, at last having remembered that not only she but Daryl’s own brother had once been members of the Governor’s crew. Perhaps Dwight, like she had, finally had figured out who he was. Daryl was hearing all this as if he’d had earplugs surgically implanted, but Tara had had a change of heart. She might always hate Dwight for murdering Denise, but in her mind, painful as it was, they were square.

Nearby, Maggie offered to let Alden outside the gates with a guard to bury his people. They weren’t “his,” certainly not anymore, he said. But he was still glad that she saw the deceased Saviors as people. When Dianne praised Maggie’s leadership, Gregory’s successor beat herself up for having tried to make Negan mad enough to come to the Hilltop so that Glenn’s grave could be the last thing he ever saw. She wanted to feel worse than she did about it, too. Yet “the only regret I have is that Negan is not in that pile of bodies.” Meanwhile, in a particularly poignant scene, Carol visited Tobin, who despite losing what had looked like buckets of blood pulled through. “If I’d known getting stabbed would get your attention,” he said, “I would’ve done it a lot sooner.” Still, he shrugged off her apology for her cut-and-run, prompting her to admit that she’d been pretending with him. And at the point when they’d found out that they hadn’t gotten rid of all of the Saviors, she’d realized that, if she didn’t hit the road, she wouldn’t be pretending with him for much longer. While he tried in vain to raise her spirits with talk of “winning” the war, Henry made off with an unattended gun, and Rick rebuffed Siddiq’s attempt to treat his wound or in any way comfort him. Clearly, “honoring Carl” was going to be an exceptionally tall order, at least where the deceased’s dad was concerned. 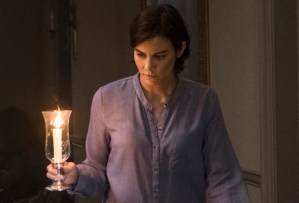 ‘BE A MAN, STEP FORWARD SO I DON’T HAVE TO KILL YOUR FRIENDS’ | That evening, a random Hilltopper thanked Maggie for her leadership, noting that had Gregory been in charge, it would’ve been all about what he wanted. (Which — it wasn’t lost on Maggie — had been exactly the reason that the Saviors had attacked: because she’d pulled a Gregory and put her interests ahead of the group’s.) Shortly, Tobin passed away and turned, and oh, crap! All those knives with which the Saviors had been stabbing, all those arrows they’d been firing… they’d all been dipped in walker guts! That didn’t bode well for Tara or, for that matter, Rick (unless his injury had been sustained during his showdown with Negan?). Before you could say “Argh!” Dr. Dana was toast, and walkers were roaming Barrington House like drunken conventioneers. (The rando who’d complimented Maggie even pulled a fantastic Homer Simpson tumble down the stairs.) Outside at the pen, Henry awakened Gregory, of all people, to ask which of the hostages had killed Benjamin. (Somewhere along the line, he seemed to have decided not to believe Morgan’s lie that it had been Gavin.) While Alden woke up and tried to talk down Henry by revealing that he, too, had lost his brother, screams erupted from inside Barrington House. “Music to my ears,” said Jared, ever the charmer. Given a whopper of a hint as to which d-bag had offed Benjamin, Henry unlocked the pen and entered, challenging the guilty party to confess. Before that could happen — as if it would! — one of the hostages turned, and in the ensuing chaos, Jared got hold of the kid’s gun and escaped with all those who wanted to get while the getting was good. Faced again with a moral dilemma, Gregory made the weaselly decision to leave Henry behind.

Inside Barrington House, after the series regulars dispatched the walkers — and Carol was forced to put down Tobin — Rick figured out that this had been why Lucille had been covered in guts. The Saviors had extra-weaponized their weapons by dipping their pointy bits in walker innards. All those who’d been cut or shot had been infected. Knowing what this meant for Tara, Daryl lambasted himself for not putting an end to Dwight when he’d had the chance. But again, she stuck up for the turncoat, insisting that he’d wanted to be with them, not the Saviors. She just hadn’t been able to let that be. “Karma’s a bitch,” she sighed, “right?” Outside, Maggie found Alden and some other hostages working to save the Hilltop. A bunch had fled when they had the chance, but a bunch had stayed, pointed out Jesus, his silky tresses gleaming in the moonlight. The following day, the search was on for the show’s cousin Oliver, Henry, who’d been missing since being abandoned in the pen by Gregory. Gavin was continuing to torment Morgan (and us) by repeating, “You know what it is.” And, as more of the dead were buried, Maggie admitted to Dianne that what was getting to her was “the cost.”

So, what did you think of the episode? Did the existence of Dr. Dana surprise you as much as it did me? Were you sorry to learn Tara’s fate? Were you satisfied with Carol and Tobin’s bittersweet reunion? Comment below!