This week on Marvel’s Agents of S.H.I.E.L.D., as Fitz & Co. labored to seal up the rift that had let leak bogeymen from a “Fear Dimension,” assistance came from a most unlikely source. Meanwhile, one “trap” gave birth to another, as General Hale’s alliance was revealed.

After spending much of the season playing with time, S.H.I.E.L.D. this week played with our minds — or more to the point, Fitz’s, and in turn surely duped many of us with a masterful misdirect. Now in possession of a glob of gravitonium yet unable to “fit it” into the spherical gizmo he created to patch the rift, Fitz grew increasingly frustrated. Not helping matters was the intrusion of “fear” manifestations such as a Maveth-like astronaut who came after Jemma. 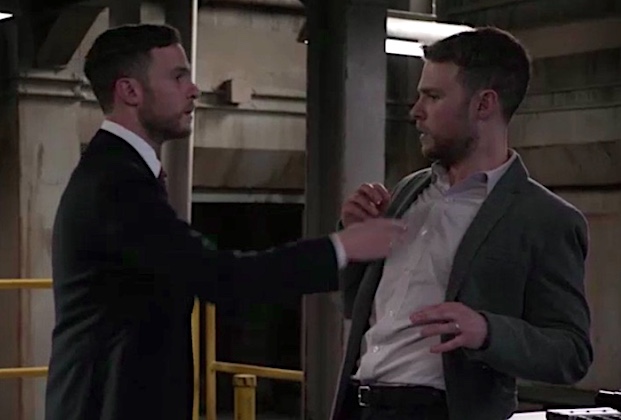 Another blast from the agents’ past seemed to materialize when Deke got knocked out cold by his grandpa’s Framework persona, the heartless Leopold aka The Doctor. Leopold then confronted Fitz himself, in private, claiming that he was there to finish what his kinder self started. But what did he mean by that?

Meanwhile, Coulson got a bead on — and then set a trap for — General Hale, by parking a cloaked Zephyr in the path of the vehicle she was in. Though she had been effectively scooped up and away, Hale held her ground. Even when mano a mano with Coulson in the interrogation room, she defended her actions (if not Chakram-happy Ruby’s!) and maintained her stance that S.H.I.E.L.D. was a terrorist organization. Besides, she smirked, had she actually been “trapped”? Or had Coulson foolishly played right into her hand?

The answer was (sigh) the latter, as became evident when Hale’s immovable “driver” was discovered to be Carl Creel, while no less than Anton Ivanov — Aida’s final experiment, whose true head now lives in a jar somewhere — was also part of the Air Force bigwig’s entourage. Outwitted, Coulson accepted, against May’s wishes, Hale’s invitation to come along and see what she truly was up to.

Elsewhere, “The Doctor” got the drop on Daisy and pinned her down for a very non-elective surgery, to remove the inhibitor chip implanted by Kasius. For one, Daisy knew that while powerless, there was no way she could become a “Destroyer of Worlds.” But there was also the very real fear that to extract the chip might paralyze her! Even so — and despite the protests of an arriving Fitz — The Doctor forged ahead with the grisly procedure. When Jemma arrived on the scene, the veil was lifted on our deception. Because there was no Leopold there, and never had been.

There was only Fitz, who in his despair over their impossible situation channeled his other self to find a solution. To that end, he orchestrated a series of events (cordoning off Mack and Elena, faking a security camera outage) that afforded him the opportunity to capture Daisy and restore her powers, so that she could Quake the gravitonium into a ball that fit inside the sphere — which she indeed was able to do. Even so, Fitz’s psychic break gave everyone a start — but no one more than Jemma. And the explosion of trust between the newlyweds spooked Deke, who of course needs his grandparents to stay together.

And so, upon finding Jemma alone in the hallway and despondent over her discovery, Deke recounted sweet stories… of his grandpa’s affinity for prosciutto and mozzarella sandwiches. Yes, I’m your grandson, he made clear. And as bleak as things may seem, he counseled Jemma, it’s not about how big the steps you take are, but that they’re in the right direction. 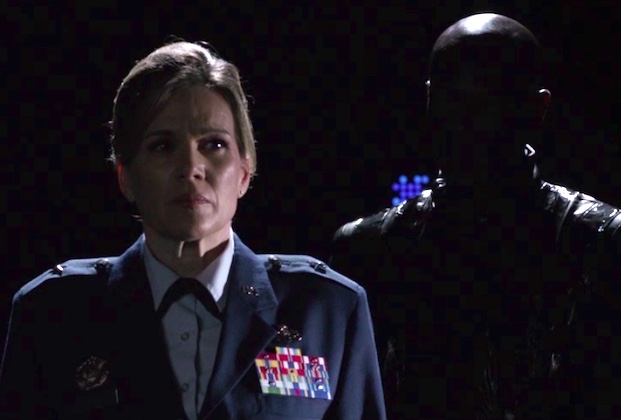 In the”bonus” scene, we saw Hale report in to a superior, whom we only glimpsed in shadows but was clearly Kree. He is displeased with the progress she has been making on behalf of “the Confederacy,” but he will give her a bit more rope. That said, should things look dire, he reminds that she is to gulp some Odium and serve up one last, manic fight. The Kree then left the general with a familiar salutation — “Hail, Hydra!”

What did you think of the episode “The Devil Complex”?