The promos for Thursday’s Grey’s Anatomy would have had us believe that Richard and Catherine’s reaction to Jackson and Maggie’s pairing was a lot like that of the Jaggie haters. But if there’s one thing we know about this show — besides that it always packs the biggest turning points into the final five minutes of any given episode — it’s that its ads are misleading about as frequently as stitches are required after surgery. So, was this another case of Grey’s pulling a fast one to pimp an hour that was less about the new couple and more about Jackson being distracted from his romance by the vaginoplasty surgery that he was set to perform on Michelle with his mother and stepfather? Scrub in and read on…

‘GOOD LUCK WITH YOUR VAGINA’ | As “Caught Somewhere in Time” began, Owen and Amelia were still going at it in a no-strings-attached kinda way (and giving each other high marks on their performance); Arizona was discovering how much Sofia missed New York, her friends and other mom; and Jackson paged Maggie to a supply closet, the door of which she was eager to lock so that they could hook up. Alas, “we don’t have time for that,” he said. “I got a vagina to build” — with his mother and her father, no less. “Some families do puzzles,” she noted. After they agreed to cancel their dinner reservations and spend the evening at his place instead, they left the closet and came face to face with… Richard and Catherine. Still, nobody discussed the elephant in the room. Maggie scampered off as quickly as she could, and Jackson opted to shut himself back in the closet. Later, Jackson asked his mother if anything was bothering her, but she was a closed book… till they got to Michelle’s room. Then, Catherine was all “Family is family” about Richard’s relation to Jackson — so much so that it even made Michelle nervous.

Meanwhile, Maggie ran to Mer with her freakout over being caught by Richard and Catherine, but her sister didn’t even know yet about her and Jackson. “We haven’t had sex yet,” Maggie clarified. However, she had high hopes for that night. Before scrubbing in on Michelle’s surgery, Catherine lit into Jackson for having hidden Maggie from her — and for getting together with someone at the same hospital where April works. “Of all the places on earth for you to dip your wick!” she exclaimed. Overhearing all this, Michelle bolted. It was nothing, her docs insisted. But it was a “nothing” they’d have to resolve before the operation began, Michelle said. “You’re not cutting into me until I have your full attention.” Alone with Catherine and Jackson, Richard fussed at his wife for thinking that no woman is ever good enough for her son. As for Webber, he wasn’t thrilled. “You have my blessing,” he told Jackson, “but if I hear you hurt Maggie, I’m coming after you.” Going back to Michelle, Catherine admitted to Jackson that she feared Richard would take Maggie’s side in any dispute just as she would her son’s, and she’d lose him the way she had Robert. Jackson advised her to remember that Richard was twice the man his father was, and at last, the two of them hugged it out. As Jackson, Catherine and Richard operated on Michelle, Jackson sweetly gave his mom permission to take Maggie’s side if things went south between them. 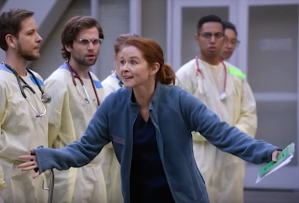 ‘PEOPLE ARE BLEEDING! PEOPLE ARE DYING!’ | At Grey Sloan, Amelia admitted to Owen that she’d been bothered by his earlier crack about her wanting kids one minute and not the next, so maybe she’d also decide she was fine with no-strings one minute and not so fine with it the next. She’d had a brain tumor when she’d done that flip-flop, she reminded him. And even with it, she added, she hadn’t cheated on anyone. Snap! When Owen, April and DeLuca held a trauma-certification training session for the interns, Kepner was, as she’s tended to be lately, extra intense. When Levi asked what the rules were for saving their patients/dummies, she replied, “This is real life, Blood Bank! In a harsh and uncaring world, the only rule is, there are no rules!” Mmkay, then. Eventually, Owen advised April that the youngsters weren’t going to learn anything if she kept killing their patients. But he soon bailed to address Amelia’s cheater remark. “Teddy is my… she’s Teddy,” he explained. “So I didn’t feel like I was cheating on you” by following his wife’s instructions to go to her. In response, Amelia said that Teddy was his tumor. As such, “our marriage didn’t stand a chance.” By the time Owen returned to the interns, April had a hose on them, and Levi was in tears. Later, Owen had to kind of regret asking Amelia for elaboration on her tumor metaphor. Teddy wasn’t benign, Amelia said, because his feelings for her had always been there, growing. Back with the interns, April had a breakdown recalling past traumas when she found out that Casey had sent the page that had called her inside — in essence, he’d cheated, because there are no rules. (Sarah Drew brought it so painfully, it only makes it more of a head-scratcher why the show is writing off her character.)

‘ARE YOU BUILDING A TIME MACHINE?’ | To Jo’s dismay, Meredith — feeling that Marie was too far ahead of them with what used to be their project for them to ever catch up — was clearing out the lab in which they’d done their research. Jo had found some substitute polymers that they could use in place of Marie’s, but Mer was giving up. As such, Jo was free to join Bailey in treating an astronaut named Marjorie (guest star Laura San Giacomo). Sci-fi fan Miranda fangirl’d the moment she realized who the patient was, and she was only left more in awe when she learned that Marjorie was building a time machine. For NASA? No, they’d parted ways ages ago. “I’m building it for me,” Marjorie said, “so I can travel to the future.” In surgery, as Marjorie bled like crazy, Maggie deduced that, since Ellis had kept her existence a secret, she could certainly have stolen her bestie’s work and kept it under her hat. Sadly, Marjorie didn’t pull through. She certainly had Bailey’s respect, though. She even gave Miranda an idea as to what to call her rectal-access port: the trail-blazer. 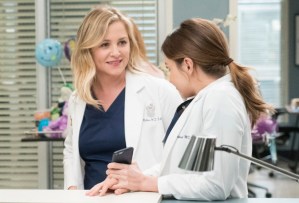 ‘I’M CRYING ‘CAUSE I’M LUCKY’ | Taking Sofia to work to get her out of her New York state of mind, Arizona paired her off with a patient’s son named Noah while she told the boy’s pregnant mom that she was going to try to stop her contractions. The woman was only 23 weeks along in her pregnancy, you see. That wasn’t the only issue in the exam room, either — Noah presented hollow, uncontrollable laughter… which could actually be seizures. As the mom was rushed to the ER in agony, it started to feel like it might not have been the world’s best idea to bring Sofia to the hospital. Amelia and Alex’s MRI revealed that Noah’s laughs were, in fact, seizures. He had an inoperable tumor; his only hope was the same project that Amelia and Alex hoped would help Kimmie.

IN THE END… | As the hour drew to a close, Jackson asked April, off her meltdown, “When did you decide that I’m not here for you?” They hugged, and she pulled him into a kiss. “You can’t fix what you can’t face,” he said. Angrily, she asked him to take Harriet that night. Off all that time-travel talk, Jo encouraged Mer not to let something Ellis did in the past wipe out Grey’s chance to change the future. Re-inspired, Mer pulled her paperwork out of the garbage and said, “Let’s get to work.” Maggie took it well that Jackson had to cancel their “dinner plans.” She even suggested that the longer they waited to eat, the hungrier she’d be. Finally, Owen took a cab to the airport: international terminal. Teddy, here he comes!

So, what did you think of “Caught Somewhere in Time”? Richard and Catherine’s reaction to Jaggie? April’s heartbreaking meltdown? The prospects for Owen and Teddy? Hit the comments.