Before we review the contestants who duked it out in Night 2 of The Voice’s Season 14 Battles, can we press “pause” for a hot second and just savor the awesome bizarreness of these particular rounds? We have two contestants labeled teammates singing a duet together. Only each one’s goal is not to do well for the team but for themselves. It doesn’t matter if they put forth the best duet they possibly can or sound great together, it only matters if they manage to outshine their partner. It’s even more bizarre than the Knockouts, in which the vocalists are seated on stage to watch their opponent try to send them home. Yes, you can often see the moment when a contender realizes, “Oh, s—, I can’t beat that,” but at least in those rounds, there’s no illusion that anyone is pulling together for the sake of a song. Which is what makes the Battles uniquely, awesomely bizarre. That observation out of the way, let’s get to Tuesday’s singoffs…

Team Kelly: Jorge Eduardo (Grade: A-) defeated Amber Sauer (Grade: B+) on “Starving” | Pre-performance, Kelly explained that she’d paired Jorge and Amber because they were her most passionate singers, which almost surely sounded more like an accidental dis of the rest of her team than she could have meant it to. In rehearsal, Jorge surprised his coach and advisor, with Amber’s help, by adding a little Spanish section to Hailee’s hit, and the contestants harmonized like a dream. Kelly, it seemed, had set herself up for a real dilemma, come time to send one of them packing. On stage, Jorge started them off sounding like a total star, and again, their harmonies were gorgeous. Amber’s phrasing on her solo verse struck me as odd, but there was no denying she has a lovely voice (and a much bigger one than she got to showcase here). They actually worked tremendously well as a duo; too bad they couldn’t continue on as a pair. Stunned Amber didn’t get stolen.

Team Adam: Reid Umstattd (Grade: B+) defeated Davison (Grade: B) on “Love On the Brain” | This Battle was a solid “B” all around — and I mean that as a compliment. (Last season, before I’d taken your advice and started grading much harder, it probably would have been an “A.” Ditto D.R. and Jackie Monday. But remember, “B” is still “very good.”) The fellas’ Rihanna cover wasn’t the jaw-dropper that Chris Blue’s was back in Season 12, but then, Chris is — and I’m gonna sound like the fanboy I am here — in a league of his own. Were I Adam, I’d have had a legit difficult time choosing between my team members. Though Davison sounded like he struggled a mite in rehearsal, when it was duet-or-die, he and Reid were both exceptional. But, with apologies to any lactose-intolerant readers, Reid’s vocals were a little more like half-and-half; Davison’s, like skim milk. Both tasty, just one richer than the other. So I’d have had to go, as Adam did, with Reid. 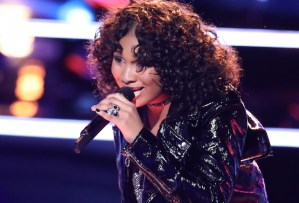 Team Alicia: Kelsea Johnson (Grade: C) defeated Jordyn Simone (Grade: B+) on “Don’t Let Go” — Jordyn stolen by Adam | From the second that we got our first taste of Kelsea and Jordyn’s En Vogue cover in rehearsal, you could tell that it was gonna be epic. So it was probably shrewd of Alicia and Shawn to advise the singers to turn down the volume at times so that, when they built up to full blast, it would have the maximum impact. It also seemed like good advice to keep them from losing their voices — but it was guidance that came too late to help Kelsea. On stage, she sounded raw not just for the sake of the effect; she actually seemed to be struggling like crazy. Get that woman a sore-throat lozenge! Jordyn, on the other hand, had a much easier time. She was able to go big without it sounding like it was hurting her to do so. I understand why Alicia went with Kelsea, after her amazing Blind. But for sure, Jordyn won this Battle.

So, who did you think fared best in Tuesday’s Battles? Vote in the poll below, then hit the comments.