You’ve got to hand it to Lilith — Shadowhunters‘ new Big Bad sure knows how to make an entrance.

The “mother of all demons” made her presence known during Tuesday’s third season premiere, taking a moment to mourn Jonathan before literally raising hell in New York City. Her first stop was a hospital, where she complained to an unsuspecting doctor about her ex-husband Adam — wait, like, Adam of “Adam and Eve” fame? — whom she claims left her barren. “He tossed me aside, took everything that was rightfully mine. He cursed me.” (Talk about some fun flashback opportunities.)

As if boring this doctor with her baggage wasn’t bad enough, Lilith then sent a demon to attack the poor guy after he finished his shift. The next time I get caught in the rain, I’ll remind myself that it could always get worse; at least a terrifying hell-born creature isn’t pinning me down, vomiting in my mouth and turning me into one of its own kind.

Needless to say, Lilith’s behavior really put a damper on Clary’s first week as a Shadowhunter, having been officially inducted during an elaborate ceremony in Idris. At least it gave her an opportunity to show off her fighting skills — my jaw dropped when she sliced that buzzing bastard down the middle — and to discover her true signature weapon: stele light blasts! Pew! Pew!

Jace also had a pretty rough go of things in the season’s opening hour. On top of the guilt he feels for being raised from the dead (and lying about it to literally everyone), he also suffered from a pesky double dream, one which began with Jonathan returning from the dead — and ended with him killing Clary. [Insert scared-face emoji here.] 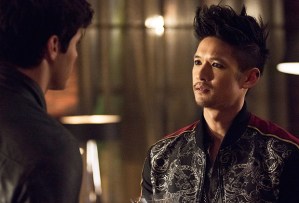 * Alec discovered that Magnus, who’s been dismissed as the High Warlock of Brooklyn, isn’t quite as pleased about his new situation as he initially let on. Fortunately, the couple recognized this (“The art of communication is still a work in progress!”), prompting Magnus to tell Alec exactly how he feels — including that he doesn’t want Alec to accept the position offered to him in Idris. “I know it’s selfish,” Magnus told him, “but it’s the truth.”

* We still don’t know exactly what the Seelie Queen has planned for Simon, but at least she let him leave the Court — even if he had to suffer through an involuntary branding ceremony beforehand. (Also, did anyone else giggle when the Queen compared Simon’s musical skills to those of David Bowie’s? I mean, I love Simon, but… come on now.)

* Rather than trying to convince her she’s losing her mind, Luke came clean to Ollie about being a werewolf, delivering the whole “All the legends are true” spiel. Of course, it helped that she already seemed very aware of the dangers of the Shadow World — and has the claw marks to prove it.

Your thoughts on the premiere? Hopes for Season 3, in general? Grade Tuesday’s episode below, then drop a comment with your full review.