If you ended last week’s series premiere of Rise by asking yourself, “Who’s going to pay for all the costumes these young hoodlums just burned in the school parking lot?” then Tuesday’s follow-up was probably music to your ears.

The musical drama’s second episode began by confronting this very issue, with the principal informing Mr. Mazzu that the cost would be coming out of Spring Awakening‘s budget, bringing its grand total to zero dollars. The principal also agreed to stay out of the theatre department’s affairs, telling him, “I’m just going to let you fail on your own.” (I guess you could say the show is “Totally F–ed,” eh?)

Given how couple-heavy this second episode was, that’s how I’m going to break things down as we discuss the week’s main events: 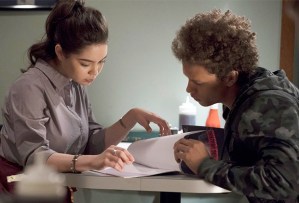 LILETTE AND ROBBIE | These two may be fated to end up together, but the show sure is making them work for it. Lilette was all excited for Robbie to come over to run lines, then was understandably disappointed when he flaked on her to practice football — which is a shame, because there was a brief flash of a cute mother-daughter bonding moment between Lilette and her mom when she was getting ready for her non-date. (Once the realization sunk in, however, it was all slammed doors and awkward silences.)

Robbie eventually got his act together and met Lilette at the diner for a post-shift rehearsal, but that only served to get her hopes up, which were crushed again when she spotted Robbie kissing some girl outside of the school. (Side note: This was the second week in a row where Robbie fumbled over his lines until someone told him to “stop acting” and just “be normal.” Why does he keep getting the two confused?) 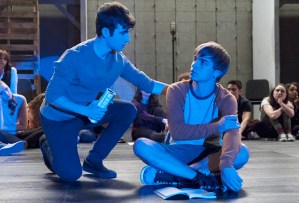 SIMON AND JEREMY | Unlike his Spring Awakening character, who takes pleasure in exploring societal taboos, Simon once again spent most of this week’s episode wallowing in his own false sense of heterosexuality. Not only did he worry when Jeremy — who looks so much like Simon that it feels like their scenes together are filmed in front of a mirror — asked him to study on a Saturday night (what will people think?!), but he even went so far as to ask out poor Annabelle, who’s destined to eventually have her heart broken when she discovers that her crush is, in fact, a gay.

Speaking of which, I understand why Simon’s conservative Catholic parents don’t question his sexuality, but if you were an open-minded friend of his — like, I don’t know, Lilette?! — wouldn’t that have come up in conversation at least once by now? Either way, here’s hoping Simon’s parents’ attempt to ship him off to a private Catholic school fails as spectacularly as the drama department’s scrapped production of Pirates of Penzance.

GORDY AND THE BOTTLE | Ignoring for a moment that this show has way too many storylines happening at the same time — and this is one of them! — let’s discuss the tragic tale of Gordy Mazzuchelli, who was nearly sent to a rehab facility this week after Mr. Mazzu found another half-empty bottle of booze in his locker. To be honest, I actually appreciate the approach the show is taking with this father-son relationship; these types of stories usually cast the father as the sports lover, disappointed in his theatre-loving son. That said, my heart broke for Mr. Mazzu as he watched Gordy with Coach Strickland, who’s clearly becoming more of a father figure to him.

* In my recap for the series premiere, I noted that Ms. Wolfe’s only real crime was being a female character on Rise, an assertion I stand by even more after watching Episode 2. Despite having far more experience with theatre, Mr. Mazzu takes every opportunity to put her down, including calling her a “liability” for speaking out of turn at the school’s budget meeting (where he delivered a weak speech about… theatre keeping kids off of heroin, I think?) The fact that Ms. Wolfe lives in constant fear of Mr. Mazzu firing her, even asking him not to take her for granted, is an insult.

* I also appreciate the subtlety with which the show is choosing to tell Michael’s story. I think we’re getting a refreshingly honest portrayal of the struggles facing your average transgender teenager in America, one who just wants to be treated like every other guy. So to see his castmates doing just that, welcoming him into the boys’ dressing room like it was no big deal, was really heartwarming.

* Am I the only one who’s #TeamGwen? From a practical standpoint, you don’t just toss talented veterans aside to make room for unpolished newbies. And if my only direction was to “give less,” I’d probably throw a damn fit, too.

Your thoughts on Rise‘s second episode? Drop ’em in a comment below.