With Monday’s episode, The Voice transformed its stage for the first time in Season 14 into Thunderdome. We all knew the drill: Two singers enter, one singer leaves. That is, unless the rejected contestant gets stolen by another coach. We also all knew as well as we knew the key advisors (Julia Michaels for Team Adam, Shawn Mendes for Team Alicia, Hailee Steinfeld for Team Kelly and Trace Adkins for Team Blake) which vocalists would emerge victorious from their Battles. Or at least we thought we did. Which singers lived up to our expectations, and which ones fell apart when it was duet-or-die? Read on. We’ll discuss…

Team Alicia: Sharane Calister (Grade: B) defeated Jamai (Grade: C) on “Mercy” | The singing-telegram guy was right to worry when he learned that he’d be performing against Sharane on Shawn’s hit — I imagined she was gonna leave Jamai so far back in the dust that the dust settled around him. However, he was sounding pretty powerful in rehearsal; maybe I’d misjudged his potential? After dress rehearsal, Alicia advised her team members, “Don’t try to be pretty.” After the performance, she might have wished she’d added a “too” in there. Perhaps having taken her suggestion too much to heart, the duo felt to me like they yelled the song as much as sang it before the whole thing devolved into a noisy mess of “Who can do a bigger, longer run?”

Team Kelly: Brynn Cartelli (Grade: B+) defeated Dylan Hartigan (Grade: B-) on “…Ready for It?” — Dylan stolen by Blake | Pre-Battle, I was sure Brynn would wipe the floor with her opponent, who you’ll recall (no matter how you’ve tried to wipe out the memory) infamously deployed boy-band moves on a folk song. But this Taylor Swift hit lent itself better to what I guess are his trademark gesticulations than had Loggins and Messina, and he didn’t sound half bad, either. (Those long high notes in particular — nice!) Brynn still sounded better, though. As sweet as her Blind Audition was, she managed to go big and growly here as if a number this aggressive was her natural habitat. Like Adam said, the kid’s a star. As for Blake stealing the contestant that he’d just likened to a T-Bird from Grease… that was a bit of a head-scratcher. Dylan did get the crowd going, though. And, unless you were allergic to cheese, which he’s as unlikely to stop serving as a fondue restaurant, he had that going for him. 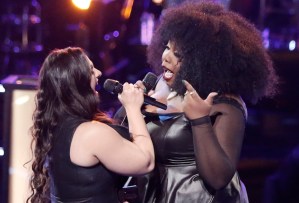 Team Blake: Kyla Jade (Grade: B) defeated JessLee (Grade: B-) on “One Last Time” | Having been dispensed with in a Blind Auditions montage, JessLee went into her Battle at a distinct disadvantage; we had no attachment to her. And Blake didn’t do her — or, for that matter, Kyla — any favors by assigning them an Ariana Grande banger that even he noted wasn’t in either of their genres. In rehearsal, Kyla had to be reminded that she wasn’t a backup singer anymore; she had to attack like a lead vocalist. On stage, well, mission accomplished. The competitors both started off pretty strong, but once they reached the chorus, Kyla easily overpowered her opponent. You could almost see her turning up the volume knob in her head — never struggling, never straining — leaving JessLee sounding a little shrill as she tried to catch up.

Team Adam: Rayshun LaMarr (Grade: B) defeated Tish Haynes Keys (Grade: B+) on “Sweet Thing” — Tish stolen by Kelly | Before rehearsals, the safe money was probably on Tish, whose technical proficiency had been so impressive in the Blinds. To stand a chance, Rayshun would have to not only channel his contagious enthusiasm — he’s hard not to root for — but also get control of his massive voice. If he could do that, we’d have a real Battle on our hands. Aaand… At first, I thought he was oversinging a little, then I realized that duh, he had to come in at 110 percent just to match Tish’s intensity level. They even sounded good during their end-of-song runoff. Regardless, the Battle had already ended, I thought, when Tish got her midsong solo — she just slayed, bringing to the fore both an incredibly powerful vocal and the star power that I remember wishing I’d seen in her Blind. No way should Adam have made her available to be stolen. 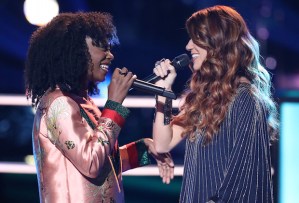 Team Alicia: Christiana Danielle (Grade: B+) defeated Shana Halligan (Grade: C-) on “Use Somebody” | I was flat-out looking forward to this Battle, if only because I’d been so dazzled by Christiana’s “Hotline Bling” in the Blinds; I also wouldn’t be all that sorry to see the last of Shana, who, cool voice notwithstanding, comes off so pretentious. During their Battle, Christiana was captivating — like, you couldn’t take your eyes off her any more than you could your ears. (“Nefertiti-like,” Kelly called her presence.) Shana, by contrast, seemed affected, like she was trying to sound different, “special.” It didn’t work. She was just totally outclassed by Christiana, who, especially in the rawer sections of their Kings of Leon cover, was stunning.

Team Kelly: D.R. King (Grade: A-) defeated Jackie Foster (Grade: B) on “Sign of the Times” — Jackie stolen by Adam | Confession: All I really remembered about these two from the Blinds was that I wasn’t bowled over by either of them. So they seemed like a curious pairing to end the first night of the Battles with. In rehearsal, though, they made it sound like their duet was going to be monstrous — in a good way. Maybe nerves and dubious song selections had done them in — with me, anyway — at the Blinds? On stage, they made me hear at last the potential in them that their coaches had (and I hadn’t so much) previously. Their harmonizing, in fact, was the best of the night. And when D.R. unleashed his turbo-powered falsetto, it became a whole lot clearer why the producers scheduled his and Jackie’s Harry Styles cover to bring up the rear of the episode. With that showy move, I also thought (rightly, it turned out) he’d won the Battle. Mind you, off her strong performance, Jackie had her pick of the other three coaches.

So, what did you think of the first Battles? Which singer’s performance most wowed you? Vote in the poll below, then hit the comments.